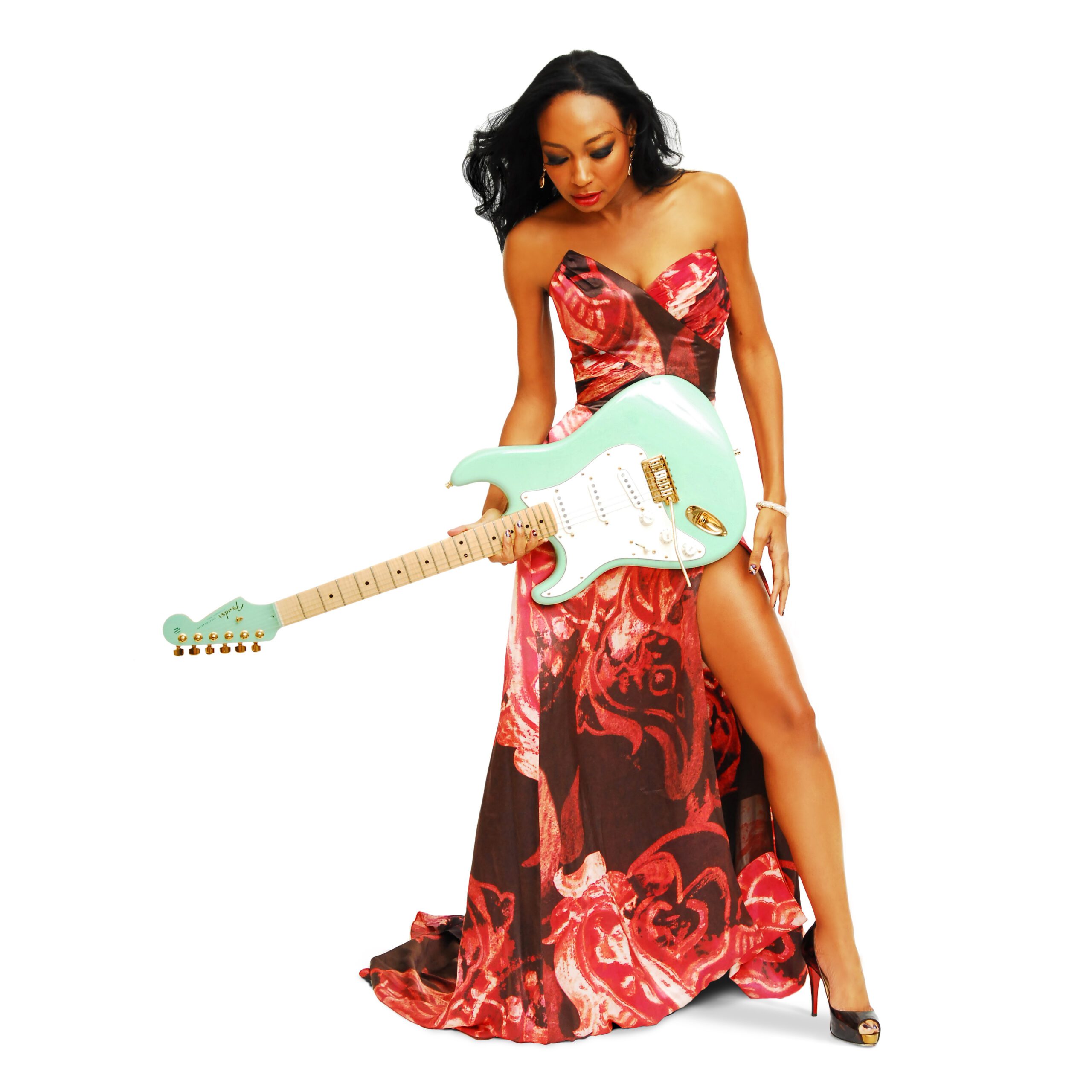 Jimi Hendrix is recognized in many circles as the greatest guitarist of all time.  What made Jimi the greatest has influenced many guitarists over the last four decades, including one who was named a couple of years ago as one of “10 Female Guitarists You Should Know.”

When Ohio native Malina Moye learned how to play guitar in her youth, she had trouble playing it at first because she was left-handed and tried to play it with her right hand.  But it didn’t take her long to find her Hendrix-like comfort zone by playing it upside-down.

Malina’s earliest gigs were with a family band from Minnesota.  From there, she has gone on to not only become a solo act in her own right, but to also share the stage with legendary blues guitarists like Pinetop Perkins, David “Honeyboy” Edwards and Hubert Sumlin, and such big names as Prince, Boyz II Men, Robin Thicke and Chaka Khan.  In addition, Malina has been involved in charitable causes ranging from UNICEF to Save the Children and the Prince’s Trust in Great Britain.

While Malina’s guitar playing can do Jimi himself proud, she goes beyond that by creating her own blend of rock, soul, and blues, then spices it up with some of that good old-fashioned showmanship as well as clever brand-building marketing and a little fashion sense.

In this interview, I asked Malina about some of her many experiences, from playing twice at the Rock & Roll Hall of Fame in Cleveland to receiving a proclamation in her hometown, as well as her taking on a Hendrix classic, her knack for marketing, and what it’s like being her own record label owner, plus a few words about a guitar-playing app she and her dad demonstrated earlier this year at NAMM in Anaheim, and her upcoming album.

GGM: First, Malina, given that you grew up with musically-talented parents, as well as with everything from Hendrix and Robert Johnson to Zeppelin and Prince, did any of that come into play when you did your first professional gig at age 12?

Malina: Yes, coming from a musical family we grew up with an eclectic pallet of music. We also played cover songs in the band as well, so as you listen and learn from other music, it will automatically begin to shape your own style as you discover yourself.

GGM: One of your earliest TV appearances was back in 2007 or so, when you did a guest shot on Food Network’s old Emeril Lagasse show. Would you call that appearance one which helped get your name out to the public in a big way?

Malina: I kind of feel like I’m still trying to get my name out there in a big way. I think it helps to definitely broaden my awareness to certain people. Emeril was very cool and a lot of fun. Doc Gibbs [Emeril’s bandleader] was very instrumental in saying yes, let’s bring her on.

GGM: Your live performances deliver not just great guitar work, but lots of showmanship, as well. Since your mom sang backup with Tina Turner, would you consider both of them to be as much of an influence on your showmanship as both Hendrix and your dad have been on your guitar playing?

Malina: Yes, you have great questions. I love showmanship. I love to entertain. My first experiences and exposure to music was definitely my parents. My mom can work a mic stand like nobody’s business. I love Prince, James Brown and I want people to leave the Malina Moye show feeling inspired and feeling good.

GGM: On your 2009 album, “Diamonds & Guitars,” you reinvented a Hendrix classic by changing his song “Foxy Lady” to “Sexxy Man.” How did you come up with that one?

Malina: Ha Ha!! One day I was messing around and just said sexy man, and I was alternating between the two lines. I like to perform it as ‘Foxy Lady’ now.

GGM: Prior to performing at the Rock & Roll Hall of Fame in Cleveland as part of a tribute to the late Michael Jackson back in 2009, you received a proclamation for your accomplishments from the Mayor of your hometown, nearby Lorain, Ohio. Did you register any surprise when you were first told about that?

Malina: I was very thrilled but what was most exciting was to see my family there–my cousins, because this is where I discovered music, and it just seemed like the perfect circle.  It’s a great feeling to believe in yourself and to have others believe in you too and for the people who know you best witness something of that magnitude. I’m just like the next man. It can happen. Believe it. See it. Feel it. Own it.

GGM: I saw a video on YouTube of you from back in 2010, when you were the first African-American female guitarist to play Our National Anthem prior to an NFL game.  How did you land what I would consider to be an accomplishment of Jimi Hendrix at Woodstock-type proportions?

Malina: Wow, thank you!! They heard about me, and it was perfect timing, being that I also grew up in Minnesota. So once again this was very big to me, and something I will never forget in my life!! Sold–out stadium, playing on the 50 yard line. Imagine 80,000 people honoring the country and you get to lead it. And at the end, the roar is so powerful…it’s indescribable!!

GGM: Last year, you returned to the Rock Hall to perform in a tribute to another legendary guitarist, Chuck Berry, in which you shared the stage with a diverse array of musicians, from country great Merle Haggard to metal legend Lemmy Kilmister of Motorhead, as well as Chuck himself, who was still rocking it at age 86. What was that experience like?

Malina: I’m still in awe of that show and I will never forget that moment. I learned so much from all of those legendary and inspiring performers, and now some of them are friends and we keep in touch regularly. To learn about the real history of Mr. Berry and then to honor him is an incredible feeling. Simply having the chance to show your gratitude the best way you know how to a person who has changed the course of music and inspired you is very gratifying. He was and still is a heck of a showman!!

GGM: Also last year, you were part of an “Experience Hendrix” tour, in which you performed alongside blues guitar greats Buddy Guy and Kenny Wayne Shepherd, and funk legend Bootsy Collins, among many others. With a lineup like that, and you being the Jimi Hendrix lover that you are, did it matter to you that you were the only female guitarist on the tour?

Malina: I didn’t even notice (lol). I had a ball and the guys are so supportive and sweet. Imagine being able to learn first-hand looking and listening to your guitar idols. I was so excited I don’t think I slept the first night. I kept thinking OMG, this is unreal. Bootsy is also on my new record.

GGM: Beyond your guitar-playing, you’ve also been labeled as “a Madonna-like ingénue of marketing,” in which you’ve done everything from your own 12-month calendar to working with such fashionable names as Victoria’s Secret and Steve Madden. How does this marketing extend your brand as a musician?

Malina: I think it’s very important to be aware of your brand. You have to think outside the box because the music industry is an ever-changing platform. But this is a good thing. Brands right now are definitely cross-promoting and looking for ways to bring the most awareness to the market place. Thanks for the compliment; Madonna is the queen of marketing and an incredible businesswoman. That’s why she has sustained an incredible career for decades.

GGM: Does you being an independent record label owner give you your own clout in a changing world that sees the traditional major-label system as less of an influence than it used to be?

Malina: Yes, I think that if you are capable and you understand what makes you unique you can the find avenues that work the best for you as an artist in this changing platform. Now it’s a free-for-all, but taste, knowing the key players, strategy, and spending money the right way will play a major part.

GGM: Given that you play lots of rock, soul and blues, do you think more musicians should think “outside the box” instead of on just one particular genre?

Malina: I love to marry genres, so my music ends up in all those markets, but it makes marketing a little tricky. Perhaps it’s the new landscape of music that is giving me the fortitude to plow ahead. But don’t forget Chuck Berry sang blues but was considered rock & roll.  So sometimes you have to get in where you fit in and lead the music in taking shape.

GGM: During your NAMM visit back in January, you and your dad, George, himself quite a talented bassist, promoted the AmpKit by Agile Partners. Were you unsure beforehand whether a guitar interface for iPhones or iPads would work?

Malina: I think Ampkit is very cool and sounds really good considering I’m very particular with how my amp sounds. It’s especially great with touring and putting down ideas on the fly. I’m a Mac girl so I knew it could work!! It’s super cool technology that could touch just about everyone who plays nowadays.

GGM: Finally, Malina, you’re going to release your newest album, “Rock & Roll Baby,” this summer, with the title track about to be sent to radio, if it hasn’t already. Will we expect more of a rock-blues-soul mix on it?

Malina: Yes, it’s a gumbo of Funk, Rock, and Soul. I hope to get more radio with this and continue to build my brand. I’m excited for everyone to hear it.

In addition to that new album, Malina will be stirring that musical gumbo of hers live on June 7 at a blues festival in Canton, Ohio, as well as some outdoor rock and blues festivals throughout Europe later that month and into July.