Home Interviews Militia Vox on music and being true to herself 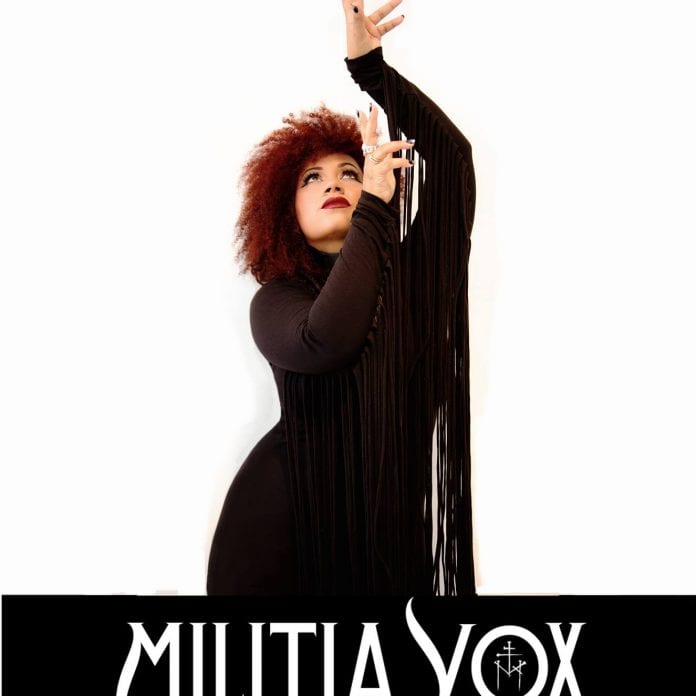 Multi-talented musician and artist Militia Vox is an amazing force of creation.

Apart from releasing her first full-length solo album The Villainess last October, Vox has been busy touring with her band Judas Priestess, and with creating a visual album exhibition, titled The Villainess: Immersive, which she is hoping to have completed this fall. This amazing metal songstress isn’t shy about challenging norms and following her creative impulses.

We caught up with Vox to talk to her about her album, the power of performance, and diversity in the music industry.

I first want to ask you about your album The Villainess. What was it like creating your first solo album?

It was great. I worked on it for five years. It’s actually a concept album, but I just didn’t want to cut any corners as far as production. I had to produce it the way that I wanted to produce it. It was a bi-coastal project because I recorded all the demos in New York, and then I took the demos to LA. Then I just popped off each song at a time or like a group of songs at a time. Then I had to have them all remixed. They were all remastered because the album was so dense musically. It was a beast, and it was the most expensive musical project I’ve ever done. And it was the most gratifying.

Was it gratifying because there was so much to put into it?

Yeah, I just had a really clear vision of what it had to sound like and the statement I had to make. So those things came together. Thank goodness.

But it’s interesting how the message of it changed over time. Essentially, it was supposed to be a finger to the industry and what their preconceived notions of what a female hard rock metal singer should look like and sound like. It was a middle finger to the pop princesses that everyone was so enamored with at the time, like how people feed into that, and how what the industry thinks is marketable and profitable.

Over the years, I had industry people telling me not to do what I want to do. I had to change myself like I had to change my look. It just never sat well with me. I turned down every record deal I was ever offered. And I had features that were interested in me, and they were telling me flat out to not look so ethnic, you need to straighten your hair, you need to wear a wig, you need to always be in heels, you need to look more white because you’re singing songs than appeal to a white audience. That never sat well with me. I’m mixed-race: my mom is black and Native American, and my dad is white. That’s who I am.

Like it’s so funny. When I was coming up, you didn’t really see a whole lot of mixed-race people in music or in the arts. They were told to look more digestible. It’s like there was a perception of what there was to look like, according to who the audience is that they’re selling to.

Fast forward to now, and it’s like you can’t swing a dead cat without seeing a mixed-race or ethnically ambiguous person on a commercial or TV. Music is the only place where it’s just slowly starting to change, which is stupid because music is supposed to be innovative and ahead of the curve, not behind. Things like Napster put that first hammer in the industry, and then a lot of labels fell apart. Now there are only three major labels, and like Sony basically owns everything. And now it’s like you’re able to do you, and it’s like, “Oh, well thanks for your permission.”

So I’m glad I didn’t I cave in, and I’m glad I just kept it real because that’s what The Villainess was initially about. Over time I got to know myself better in this process because then The Villainess was also exposing things that maybe I didn’t really know about myself – like deeper desires and motivations and things like that. It’s just taken on a whole life, like a piece of psychology. So it’s been intense s**t but a hell of a trip.

I’ve read that you are doing horror film shorts with the album as well.

Yeah, they’re music videos, and I’ve got a couple of shorts. It’s all been compiled into a visual album that has been doing the film festival circuit.

The newest video, which is not released yet, just won best new music video in Paris. I’m hoping to do to a couple more because I’m presenting them to museums to do installations.

My work tends to be more based off of horror and have horror elements in it. The goal is eventually to score horror films; I would love to score a horror film.

I’m also directing. I’m directing my own work, and I’ve directed plays and stuff like that in the past. But it makes sense for me to direct more things in the future that are not necessarily my own work.

It seems like a lot, but I do what feels natural, and I’m always curious. I like to challenge myself, to go in different directions, more than, I think, the average person does.

Society tells people to be good at one thing and to just do that. But I’m actually good at a couple of things, so I like to do them all. And there’s no excuse for doing one thing honestly.

But the goal is to finish the visual album by the fall this year, and then to start putting it in art galleries and doing showings for a week or two weeks residency where you can go in and you can experience the piece like an immersive art piece. So I’m putting that together right now, and I have two more videos left to shoot. I’m in the process of editing one.

I’m so excited for people to experience The Villainess in an unusual way, and just to kind of push the boundaries of how people consume music, of how people consume visuals and music videos. To me, music videos are one of the greatest mediums that ever existed. You end up sharing so much more of the story of the song. I just want to create something that is exciting, memorable, and useful.

I understand that you also play the guitar?

I play a purple Ibanez SoundGear, affectionately named “Violet,” and a silver glitter DRG guitar, called “Bullet,” which is designed for female guitarists because the neck is small. It’s perfect for small hands and perfect for me.

I honestly feel like I have a natural inclination towards bass. I like to dig in and am pretty heavy-handed, so the bass feels better to me. Guitar requires a more delicate touch that goes somewhat against my wiring. Also, I enjoy the deeper, darker tones you can get in a bass. It truly resonates with me. I’m always drawn to what I call “whale sounds,” obscenely dark vibrations that envelope and engross the listener. One day, I’ll take a real crack at baritone guitar and see how that vibes with me.

Getting back to thinking about diversity in the arts, I love your statement, “disgrace your stereotype.”

Thank you. I used to do a lot of theater, like tours, Broadway shows, and all kinds of musicals, mostly rock musicals, and I would go into auditions, and I think it’s another place that’s been slow to change.

It’s almost unfathomable. Theater used to be a place where you could see some cutting edge stuff; you could see risk-taking. You could see new boundaries being broken onstage, but for whatever reason, it’s just taken so long for that world to come into 2019. Like Hamilton and Rent were really the first musicals to drag theater into the present as far as diversity. But when I would go out for auditions, they would call me in for roles, and I’d assume they’re calling me in for like this rock lead personality. And then they’d be like “Oh no, no, no, we’re calling you in for like a black soul singer.” I’m just really disenchanted with the racial profiling that goes on in theater.

That’s what it is. You know theater is based on stereotypes. So because of that, it just didn’t matter how good I was or how much love I had for the craft. At the end of the day, they would look at me as like there are two personalities in the theater. It’s like either she’s a sassy black friend or the TV set mama character. They don’t honor a spectrum of black women in theater. So I think theater has a long way to go as far as what their perspective of what black women can do.

But as a performer and a musician, being on stage is still a big part of what you do. What is an aspect that you love about performing on the stage?

What I love most … I love the presence of being frozen, like the live atmosphere, where nothing else matters in or around that moment. It’s just like the moment, and the experience is happening. You start channeling a certain energy. I call it channeling the muse. I think anyone that’s been to a really great show knows what that moment is and I think that’s why we all go to shows. That’s why we all do this. It’s real, and it’s so raw. There is something like superhuman about it.

Do you find it’s different between live music and live theater?

There is a similar kind of live energy like it could all spiral out of control at any moment. But then it doesn’t. And it’s transient too like it’s not forever. You can remember it only as you can feel it.

Do you ever watch those videos of people in senior centers that have dementia? They play them music, and then they remember a moment. There was this video that I saw that was really heartbreaking. The older woman used to be a dancer during the Harlem Renaissance, and they played a video of her when she was a showgirl. And she just lit up. You know, she remembered that moment or that feeling, and that excitement seemed like it just totally brought her back. What else can do that?