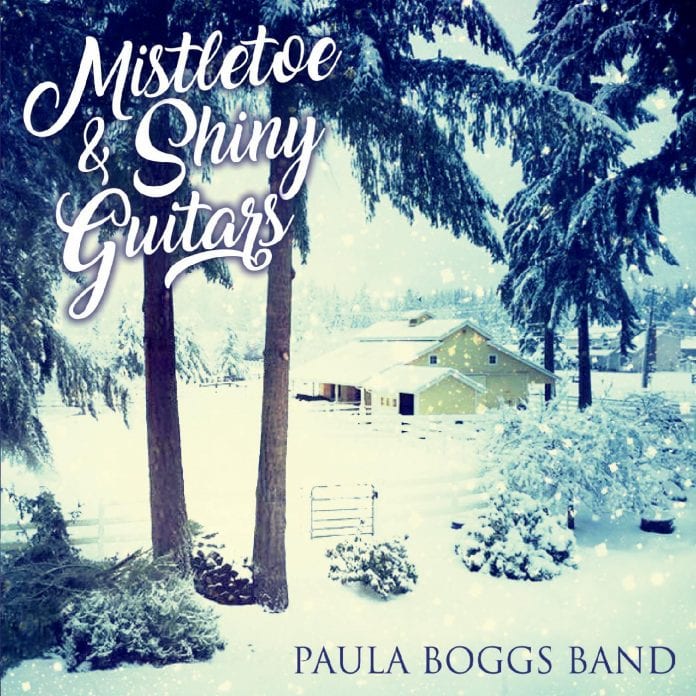 Produced by Ryan Hadlock (Brandi Carlile, The Lumineers) with special guest Darren Lucas on mandolin, the song was recorded this past summer at Bear Creek Studio near Seattle. Frontwoman Paula Boggs originally wrote “Mistletoe & Shiny Guitars” as part of the Acoustic Guitar Project©, which selects songwriters from around the world and gives them a week to write a song on a shared acoustic guitar.

The band then took the stripped-down solo version and fleshed out the tune with mandolin, banjo, accordion, bass, drums, and percussion, along with gorgeous three-part vocal harmonies and, of course, sleigh bells! The result is a warm, uplifting take on the holiday spirit, inspired by a bus ride that Boggs took through Seattle during last year’s holiday season.

Boggs fills us in on what’s been going on in her life and her new single “Mistletoe & Shiny Guitars.”

We spoke several years ago which has been way too long. Tell us about what’s been going on in your life since that time.

Now in my fourth life, including a stint as a U.S. Army Captain, for the past decade plus I’ve been chief songwriter, secondary guitarist, and lead vocalist for the “Seattle-Brewed Soulgrass” Paula Boggs Band. Year 2018 was cool. We released our third studio album, Elixir – The Soulgrass Sessions in Fall 2017, and starting in January this year made a second trip to the National Association of Music Merchants Show (NAMM) in Anaheim, CA followed by a sold-out show at LA’s Genghis Cohen.

Among other 2018 highlights, we played “Record Store Day” at the Seattle indie record store Silver Platters, recorded “Mistletoe & Shiny Guitars” last Summer at Bear Creek Studio with producer Ryan Hadlock, played college radio in-studio sets in Oregon and Seattle, had our ﬁrst shows in Colorado and Idaho, released “Mistletoe & Shiny Guitars” including a lyric video, added Radial Engineering Inc. and Breedlove Guitars as band sponsors, recorded two songs at Deering Banjos’ headquarters for their YouTube “Wood Room Sessions,” and sold out Bainbridge Island’s Treehouse Cafe. I also received a Seattle Mayor’s 2018 Arts Award. This year also saw major changes to the band. Percussionist Tor Dietrichson, lead guitarist and banjo player Mark Chinen, and I have played together 11 years and we now have three great and relatively new band musicians with us — Jake Evans on drums, Paul Matthew Moore on vocals, keys and accordion, and for this song, we recruited former band member Jarrett Mason to join us on vocals and bass. They are fantastic musicians and fun to be around.

Gearing up for 2019, we look forward to kicking off with a January 5th show in Snoqualmie, WA, east of Seattle, returning to the Southeast US in April, and playing a number of summer festivals. I’m also hoping to attend a songwriters’ retreat in 2019. 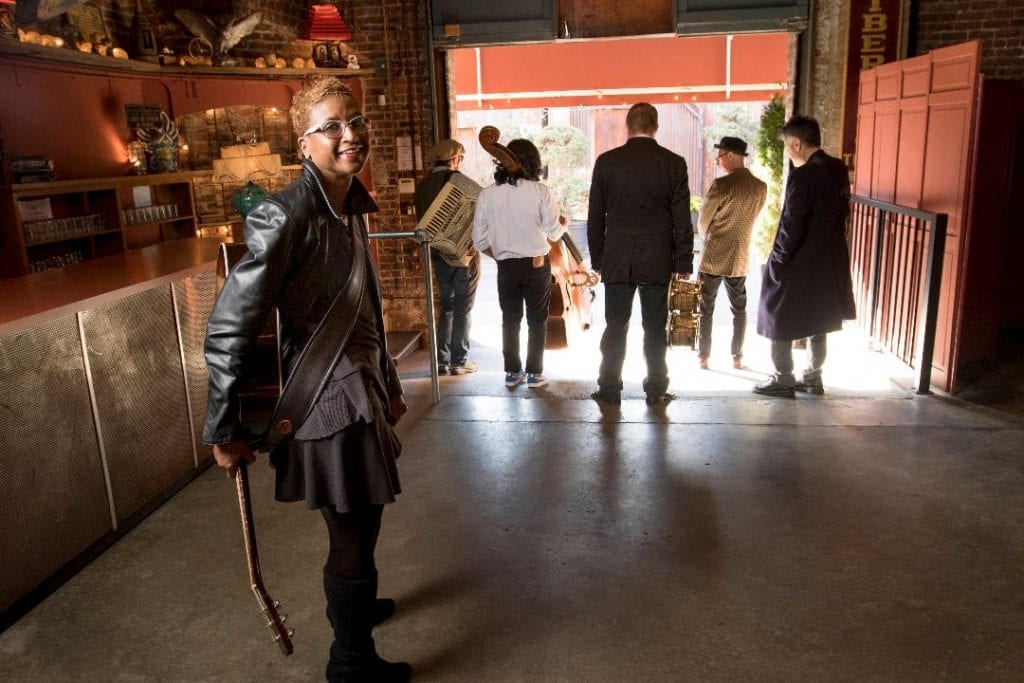 You’ve been quite busy. Your holiday single, “Mistletoe & Shiny Guitars” was written as part of the Acoustic Guitar Project©.  Can you tell us about that project?

Wow! I was so honored to get the call and humbled to learn music folks in the greater Seattle community had recommended me. The Acoustic Guitar Project© (TAGP) is a global music platform and concert series — that inspires musicians to write an original song and record it live in one week — and Seattle is one of 55 cities around the world participating. Each year in each city, TAGP chooses ﬁve local musicians and gives them a communal acoustic guitar and simple recorder — I was given a Zoom H4 — and was songwriter #4.  The musicians have one week to write and record the new original song, without editing, before signing the guitar, taking a picture with it and passing both to the next songwriter — I received the guitar in a suburban community college parking lot and turned it over to the next songwriter in a downtown Seattle Starbucks. TAGP then uploads the song, photo and video to its site. Each songwriter performed his or her original song, mine being “Mistletoe & Shiny Guitars,” at a showcase in an intimate venue north of Seattle last March.

What was the inspiration behind the lyrics for “Mistletoe & Shiny Guitars”?

Writing and recording an original song in a week was scary for me so I needed to ﬁnd ways quickly to get out of my comfort zone. After some handwringing, I decided to ride city buses. Though I hadn’t ridden a bus in years, they were once a source of great songwriting material. On city buses, you see folks of different socio-economic backgrounds, races, genders, and states of mind brought together in a relatively conﬁned space. Dramas unfold and the start-stop of buses create their own urban rhythm. When I embarked on my journey, I thought I’d write about the bus human stream, but as we winded through downtown Seattle I was taken by the holiday decorations littered along city streets sparkling and mildly obscene, prompting me to ask myself — “What is Christmas really about?” My answer: “It’s really about gratefulness.” With that, I asked, “What am I really grateful for?” I’ve had the same life partner for many years and together we’ve created something I’m incredibly grateful for. I also thought a lot of people could relate to that or at least aspire to it. Songwriting for me is as much about connecting with others through song as anything else so I thought I’d come to something relatable.

The song utilizes some bluegrass instruments and even sleigh bells to create a beautiful melody that invokes a true holiday spirit. What was the writing process for the band to create the sounds for this holiday song?

Great question!  Of course, the original song was written in isolation and with an acoustic guitar, so a threshold question was “what can a band bring to this song to make it better sonically while also staying true to its lyrics and overall vibe?” Fortunately, we have a “soulgrass” vibe already. It’s an exercise we go through with almost every new song I write, so there was little risk this song would morph into metal or classical. I wrote it with a rustic sensibility, I live on a nine-acre farm and in the normal course the band plays mostly acoustic instruments — piano, accordion, banjo, acoustic guitar, standup bass, percussion, and drums plus lots of 3-part harmony. It didn’t take long for keyboardist Paul Moore to recommend we use accordion over piano and Ryan Hadlock, our producer, had a lot of great ideas. It was Ryan’s idea, for example, to begin the song in 3-part harmony and with sleigh bells. Until recording day, we weren’t sure whether we wanted ﬁddle, harmonica or mandolin but we knew just the guy — multi-instrumentalist Darren Loucas, who brought his bag of tricks to Bear Creek Studio.  After experimenting with them all, we landed on mandolin and Darren plays an incredibly beautiful solo in the song.

How do you plan on spending your Christmas season this year?

My spouse and I are heading to Poipu, Kauai, and I can’t wait.  Having lived in Seattle many years, we know maintaining sanity depends in part on ﬁnding sun in the winter. For us, Kauai is a healing and spiritual place. We take walks, read, create art, have the kinds of conversations that come when one is not otherwise distracted, and invariably make new friends and connect with old ones. We get energy from Kauai and that helps us tackle the New Year with gusto worthy of the moment, aloha!