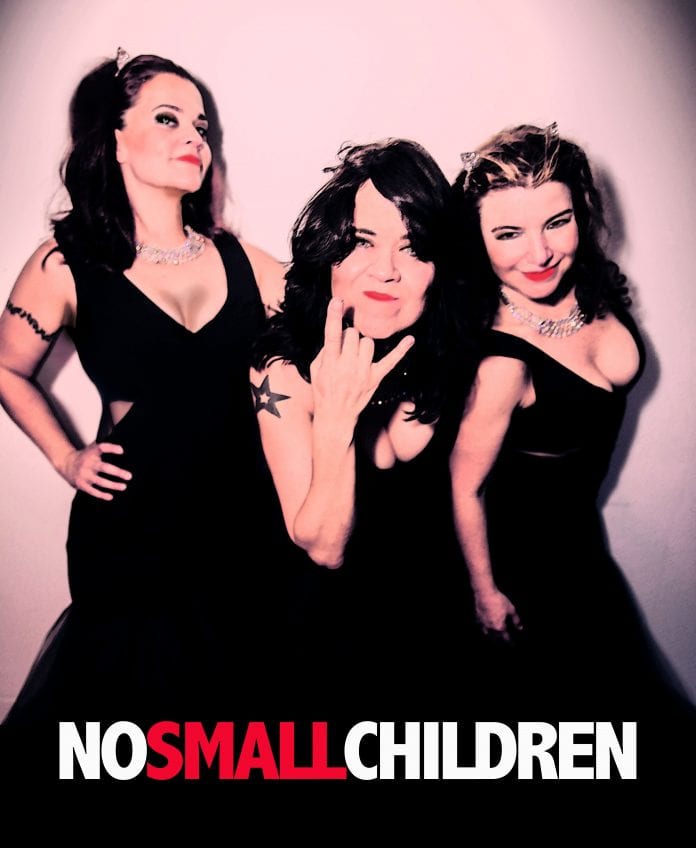 School teachers by day, rockers by night, this rock band based in Los Angeles features Lisa Pimentel (guitar and vocals), Joanie Pimentel (bass and vocals), and Nicola Berlinsky (drums).  We interviewed Lisa about the band back in 2013 and you can read the interview HERE.

No Small Children has made a name for themselves in the music scene with their single “Ghostbusters” featured in the recent remake of the Ghostbusters movie and is released on RCA, another single “Big Steps” has been featured on the Netflix original series ‘Santa Clarita Diet’ starring Drew Barrymore and Timothy Olyphant, and they have toured across the U.S. most recently performing at the Unity Ball at the end of the Women’s March in DC.  The band worked with producer Bob Marlette (Rob Zombie, Black Sabbath, Anvil and Filter) on their latest single “I Feel Better.”

Lisa, Joanie and Nicola filled us in their music, influences, favorite instruments and more.

How would you describe your sound to people who haven’t heard your music?

We describe it as original rock with edgy pop punk elements, heavy guitar sounds, and melodically driven vocals…or more simply, a rock and roll band. We try to write the type of music that gets people jumping in the club or singing at the top of their lungs on their drive to work in the morning.

Who are your influences?

We each come from a very different musical background, the influences of which you can hear in our music.

Lisa: I apologize for the long reply, but I find this great question very hard to answer in a short response, so here is my long response.

I started with the music my parents and grandparents listened to. There was a lot of Italian music, but the songs of Carol King, Elvis and The Carpenters definitely made a mark on me!!! Watching them play instruments put stars in my eyes. As I started making my own musical choices, it was all about me starring as John Lennon as I sang in the mirror. My vinyl copy of “Meet The Beatles” wore out because I played it so much. So did the broom that I used as my guitar.

In 4th grade, I started playing saxophone and stuck with it all through college. I loved the band music so much and learned from my teachers, who I adored. I got really into Miles Davis and John Coltrane around that time and feel like that music is a big part of my being in music. I still listen to “A Love Supreme” every few weeks.

After High School, I went to college, and as a music major, fearfully pretended to get into smarty-pants music for four years. I learned a lot, but “UGH”!!!!! When I finally graduated, I couldn’t wait to dive back into the Boston Punk Scene. I loved the bands so much and I loved the people, too. Darkbuster was my favorite. “22 Songs You Never Want to Hear Again” changed my life. Those years made me appreciate the honesty and true courage that music can have. Being part of that community put me in touch with a part of myself that I was always a little afraid to reveal.

These are some of my benchmark music, but there is so much more in between…way too many to name.

Joanie: I’ve been a soul singer most of my life so my influences come from the legends like Aretha Franklin, James Brown, Sam Cooke, and Otis Redding.

How was your experience recording this new single “I Feel Better” with producer Bob Marlette?

Our recorded music is a good representation of the evolution/growth of our band and working with Bob was the next phase of that evolution. He really helped us explore new sounds and approaches to our music. We learned so much working with him and we’re super excited about how this new music came out.

What is next for you? Touring, recording, etc.

Lisa: Joan Jett, Pat Benatar, The Foo Fighters, Jack White. Plus all these other bands that we don’t know about yet. We are surprised over and over.

Nicola: I think it would amazing to play with PJ Harvey.

Joanie: I’ve never seen Coldplay live and think I’d really enjoy their show. As far as collaboration is concerned, I’m open to anyone who’s interested. If you’re reading this, give me a call.

I love singing and playing guitar.

What is your favorite instrument?

Lisa: I love singing and playing guitar. I also love playing drums and the trumpet. I think I mostly like instruments where the sound is close to the impact that makes the sound. I can play a lot of instruments, but I really suck at anything that uses a bow…the sound is too far away from the impact, lol.

Nicola: Drums. When listening to a solo acoustic instrument, I adore the sound of the cello.

Every show brings
something new.

How long have you been playing live performances? What is one memorable performance experience that sticks out in your head the most?

Lisa: I have been playing shows since I was a teenager. We have done some really cool shows with No Small Children including The Unity Ball at the end of The Women’s March in DC. I also LOVE playing in small clubs, where you can see every face and party after the show.

Nicola: I played when I was younger and through college but then stepped away for a long time to focus on teaching. These past three plus years with No Small Children has been a new performing experience for me. Playing our first huge stage at the Tweed Festival in Vermont was a thrill, as was playing a small, packed club in Ohio. Every show brings something new.

Joanie: I’ve been performing live since I was 16, my first ‘paid gig’ was singing in the subways in Boston. I once sang with George Clinton & P-Funk. The concert lasted 5 hours and it was incredible.

The relationship between
the audience and
us is totally symbiotic.

What kind of energy do you get from the crowd while performing or is there a particular energy you look for?

If it looks like we’re having a good time on stage it’s because we are. We try to always project the type of high-octane energy that pulls people in rather than push them away. The relationship between the audience and us is totally symbiotic.

How do you balance between daytime work and rockers at night?

It would be easy to think of teaching as a day job or music as a hobby, but to us, they’re parallel careers. Both professions require our best so we have to be very organized and efficient with our time. We’re in constant communication with each other, we adapt and adjust where necessary, and we try to make the most of every minute. Oh and coffee….lots of coffee.

Do you have any advice for up and coming artists?

We would not presume to think that we’re enough of an expert to give advice to anyone. The only thing we can say for sure is that there’s no substitute for hard work.

What is your favorite song and who is it by?

Lisa: Too difficult to pick one favorite song. Nope. Can’t answer this. Won’t do it. By the time this article comes out, I’ll have a new favorite song. All right…Here are a few past favorites…”Cheap Wine” by Darkbuster, “Dreaming” by Blondie, “Pursuance” by John Coltrane, “The Spark” by The Roots, “King Kunta” by Kendrick Lamar, and I am into The Shins right now.

Nicola: This is a hard one. I’ve always loved everything by David Bowie, the English Beat, Crosby Stills and Nash, and Radiohead. Right now “Whole Lotta Love” by Led Zeppelin and “Old Man” by Neil Young come to mind.

Joanie: This is an impossible question to answer because it changes almost daily for me. If I had to answer I’d say my favorite song is the next one we write.

Where do you see yourselves in 10 years?

Lisa: Not sure. Too many decisions between now and then. It will be great, though.

Nicola: Ideally, living off the grid.