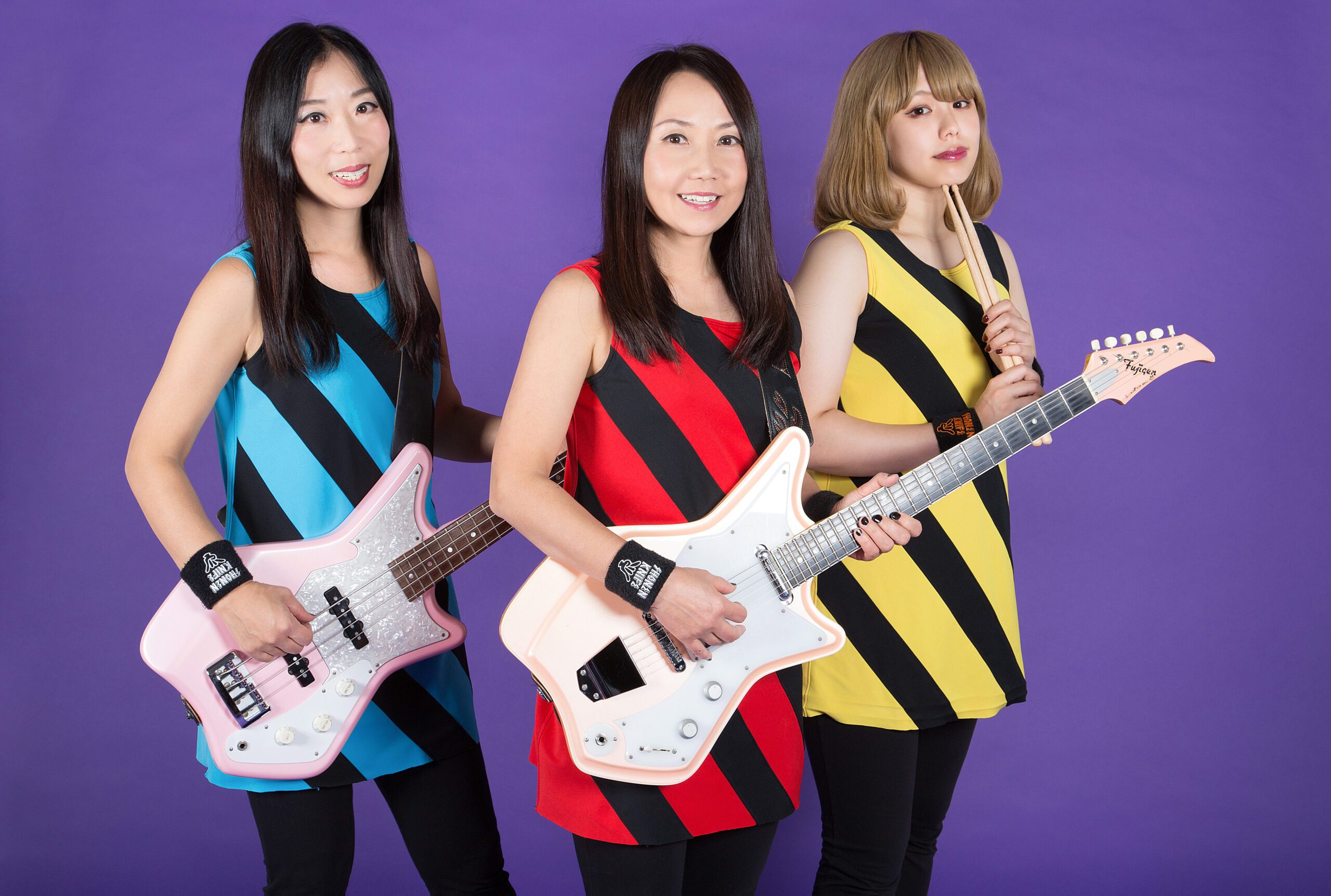 Shonen Knife, the Japanese pop-punk band, based in Osaka, Japan, is still rocking out. For three decades now, sisters Naoko and Atsuko have been making music, having started a band in the early ‘80s. Their music still has an impact in the entertainment industry today.

1960s girl bands, the Beatles, The Beach Boys, and the Ramones are all groups they credit as having heavily influenced their sound. As a matter of fact, the Ramones had such an influence on them, the sisters even performed for a while as a Ramones tribute band – The Osaka Ramones.

ALIVE! In Osaka is the band’s first live album released in ten years, accompanied by a DVD, and features Shonen Knife classics such as “Rock N Roll Tee Shirt,” “Sushi Bar Song,” and “Twist Barbie” and was filmed at the same location as the previous live album Live in Osaka.

Having been through several member lineups, Shonen Knife has stayed a steady course and has an avid fan base, even garnering the attention of Kurt Cobain in 1991. With over 20 studio albums under their belt, the release of a live album, and their unique fashion style, we were pleased to feature the Naoko and Atsuko and their band, Shonen Knife, to learn more about them, and the bond between these two sisters.

Your band has been going strong for 37 years now. How are you able to continue creating great music and staying relevant?

Naoko:  I’m lazy and just doing something spontaneous for that reason. I don’t realize so many years have passed. I can say one thing when I see our audience’s smiley face, I can be motivated. I’m happy if people get happy through our music.

You have been making music together and traveling and touring for a long time. Does being in the band together support the sister bond and keep you close to one another?

How did the two of you find out you had a love for music that you decided to start a band and travel the world; it is fantastic to see such a diverse fanbase.

Naoko:  We usually don’t have any conscious that we love music, it’s simply a sensuous thing. We feel good when listening to music. It is amazing and lucky that we can travel the world and play in front of our fans.

Naoko, when did you first learn to play guitar?

Naoko:  When I was 15, I asked my mother to buy an acoustic guitar. She bought it for me, and I started to play, but it was too difficult. It was too sore for my fingers to hold the guitar strings. Three years after, I bought a cheap yellow Stratocaster model and started to play. I’m a bad player still.

Atsuko, you were initially the drummer, but because of some band changes, switched over to bass. Did you play bass before then, or was that something you had to learn?

How about the songwriting process for the band? Is it an equal collaboration or is there any one member who takes the lead?

Naoko:  Over the last ten years, I write all the songs for the band. I record the song roughly with voice memo of my iPhone and then send it to members. Then we get together at a rehearsal studio and decide arrangement.

You recently released ALIVE! In Osaka which is the band’s first live album in ten years. Tell us more about it!

Naoko:  We had many requests for releasing a live album from our fans for a long time. Ten years have passed since the last one, so we thought that it was a good opportunity to release a new one. We were thinking if we make not only an album but a video, too, it might be fantastic. So, we made a video, too. The club we played at is called “Fandango” in Juso, Osaka. Our live album that was released ten years ago Live in Osaka was recorded at the same club. It’s fun to compare the new one and the original one.

Recently finishing up a UK tour, do you have any memorable road stories to share?

Naoko:  Thanks to our audience and fans, our UK tour finished successfully. I had a very good time at our shows. Besides the shows, we had a day off in York and went to the National Railway Museum. Many cool trains were there, and the smell of paint was interesting. Atsuko and I kept a blog on our website during the tour. I hope many people read it and enjoy.

You’ve been so fortunate to have toured the world, visited so many places, and worked with some pretty amazing talent – Kurt Cobain comes to mind. Have you drawn inspiration for your music from these experiences?

Naoko:  Yes, of course. I wrote some songs inspired by my experience during tours. For example, my song “Do You Happen To Know?” is about a story when I left my guitar at the airport. “All You Can Eat” is inspired when I go to an ‘all you can eat’ restaurant during U.S. tours.

When touring, do you change up your songs or improvise in any way according to the crowd?

Naoko: I don’t improvise, but fix our setlist during the tour according to the reaction of the crowd.

Being such talented musicians, you all very passionate about your instruments. Do you each have a favorite brand to use when playing?

Naoko: I use Daisy Rock Guitars in the U.S. They are very cute looking. I love them. They are a good match with our stage costumes. I also like my custom-made guitar by a Japanese company called Fujigen. I sometimes use my Gibson Flying V for shows, so I can make a thick sound. Other than that, Aria Pro 2 guitar is what I used for Osaka Ramones, and I have some Rickenbacker guitars. The design of the bodies is beautiful. For pedals, I use Sobbat Drive Breaker, Little Big Muff, BOSS Blues Driver, and BOSS Chromatic Tuner.

Atsuko:  I really like my Fujigen bass they made for me. I also like Zon Sonus basses. Sometimes I use a 1980s Fender Jazz Bass Special, a Daisy Rock Candy bass, and an Aria bass.

We love your unique style and stage presence which the band has become known for. Do you all have a similar fashion sense or is one of you the chief “fashion expert?”

Naoko:  Atsuko and I have a similar fashion sense. We sometimes buy the same clothes by coincidence. For stage costumes, Atsuko designs and makes all of them. She is inspired by ‘60s and ‘70s fashion. She understands the performer’s feeling and reflects it in the design like using quick dry fabric. They are very comfortable to wear, and the design is so sophisticated.

Lastly, what would be your one piece of advice for young, aspiring artists?