Home Interviews You’ve Been Warned: How The Warning went from video game players to... 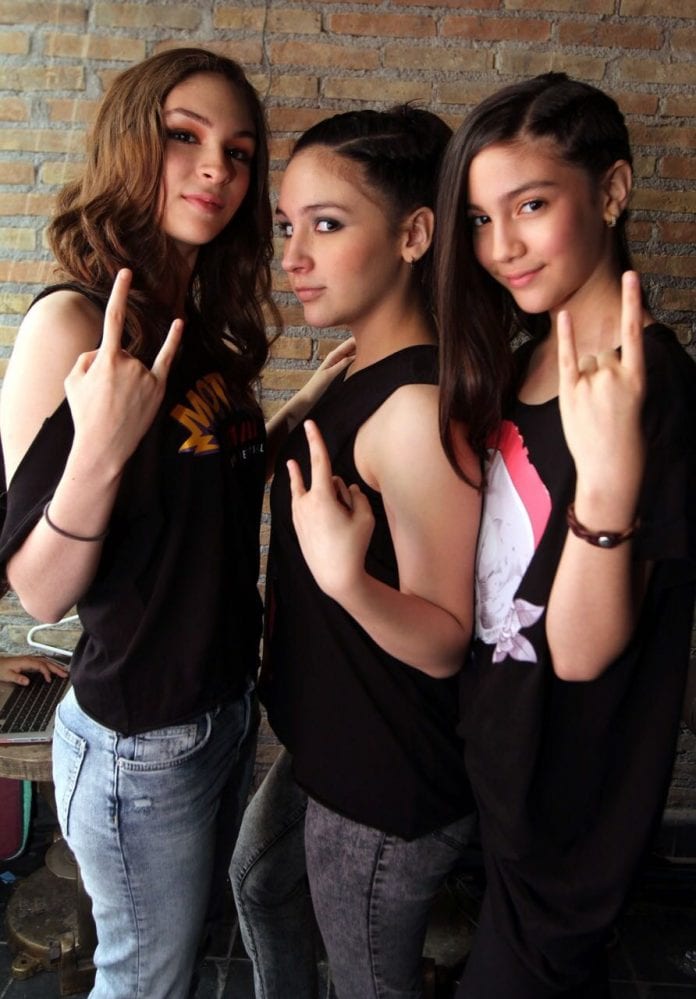 It is not every day that you hear of a band that started from playing the popular music video game Rock Band to ultimately becoming a real performing rock band only to have the game maker choose one of your singles to be featured on the video game. Well, the creative young sisters behind The Warning were able to make it past the video game’s TV screen and into the real world of music. The three sisters, Daniela, Paulina, and Alejandra Villarreal, from Monterrey, Mexico, are now touring around Mexico and the U.S., showcasing their musical talent.

It was the cover of Metallica’s “Enter Sandman” uploaded to their YouTube channel in 2014 that went viral and has to date garnered over 17 million views, which got the attention of Ellen DeGeneres and an appearance on her show. With an EP under their belt from 2015 (Escape The Mind) and a debut album from 2017 (XXI Century Blood), the band has announced they will heading to LA to record their second studio album.

The girls are the perfect blend of new-age rock and roll and old school rock to produce music their fans love. It was a pleasure to learn more about The Warning, and to hear from Dany, Pau, and Ale themselves on what inspires their music and what gear they like to use when performing in front of thousands of fans.

“You Have Been Warned:” these girls are on the rise and ones to watch!

You all started in music so young, attending your first music camp as toddlers. Were your parents’ musicians or did they come from a musical background?

No, our parents are not musicians, but they are hardcore music lovers, and our Dad used to own a recording studio here in Monterrey so naturally, we grew up surrounded by music.

We just had another interview on our site where the artist talked about learning a musical instrument on Rock Band. Your bio states the video game was very influential in deciding what instruments you would play. How old were you all when you started, which instruments did each of you gravitate to, and how often did you play?

Dany:  Yes! Rock Band was a huge inspiration for us; we played it like every day! It was great playing together! Pau usually went straight for the drum set, and I grabbed a guitar and, well, Ale was still too young to play, but she still danced around while we played. We were eight, six and three at the time.

When did you transition over to real instruments?

Dany:  I was eight years old when I picked up the guitar and found out it was very different than the one in the game! I didn’t have a very hard time with notes and stuff thanks to the piano, because we all play the piano.

Pau:  With Rock Band, my Dad found out that I had very good coordination for my age and since I loved playing the drums in the game, that’s the instrument I chose to learn to play for real. I started at the age of six.

Ale:  Although I didn’t get to play Rock Band, I still enjoyed watching them play! I don’t know why but my first choice to pick as an instrument to play was the harp! But I’m glad I didn’t choose that because I really love the sound and feel of the bass. Although I got my bass at the age of six, I didn’t start playing until I was seven and was big enough to hold it!

Never intentionally intending to start a band, it was your practice video of Metallica’s “Enter Sandman” that was uploaded to YouTube in 2014 that went viral that made the decision for you. That video has garnered over 17 million views! Besides Metallica, what other bands have influenced your music?

We really listen to every type of music there is, from classical music to pop, and I think that all of that has really influenced our music. I think the bands that have influenced us the most, besides Metallica, of course, have been Muse, My Chemical Romance, Queen, and Pink Floyd.

Are there any female musicians that have inspired you?

What a fantastic opportunity you had to be on the Ellen Show. Tell us about that opportunity.

It was indeed amazing from the time they first contacted us to invite us on the show! We had to prepare a short version of a song to play, and we played “Crazy Train” by Ozzy. We were a bit nervous about our performance since we knew that millions of people were going to watch it! We were shocked when we found ourselves backstage moments before meeting Ellen. We didn’t meet her until the show, so our reactions to seeing her in person were what you saw on TV! We were smiling from ear to ear the whole time and a lot of the time after that!

Harmonix Music Systems was so impressed with the story of your early beginnings of learning your musical instruments on Rock Band that they included one of your singles on Rock Band 4. Which single did they choose and why?

At that time, we had only released an EP of our earliest compositions, so we were just getting the hang of it when Harmonix surprised us with this great opportunity. The song that we chose to be on Rock Band 4 is “Free Falling,” and now we are very happy to have a second song in the game! This one is called “Survive,” and it’s from our first album XXI Century Blood.

Exciting. Congrats on that. Has becoming musicians together strengthened the sister bond that you all share, or have you always been very close?

Dany:  We’ve always been very, very close as sisters. We are best friends, but I still think that playing together does make us closer. It’s very cool that I get to play with my sisters; it’s extremely fun, and I think I speak for all of us that we love playing music together.

Do each of you have separate idols who helped shape you into the artist you have become?

Are one of you considered the “leader” in the band in making the decisions when making music, creating videos, touring, and the direction the group will take?

Not really. Since the three of us are always very into what we are doing, we have a very nice balanced way of dividing the work between ourselves, and since we have a great team, all the decision making isn’t up to only us, which really helps.

How about the songwriting process? How do the three of you collaborate on the lyrics, instruments, and melody?

The song usually starts with Pau playing the piano and creating basic melodies which then become vocal lines. She then starts spitting some lyrics, and once she has a line or two, she shows it to us, and we finish the song together. Same thing if another one of us starts the song. After the song is finished on the piano, the three of us starts putting the other instruments to the song.

Tell us about your gear.

Ale:  I play with a Spector bass and Orange Amp which Dany and I are sponsored by.

Dany:  I play with two guitars at the moment; a guitar made by the luthier Rick Toone, and I am sponsored by Manson guitars and play the Manson MA-2 EVO-S.

Since you all began your music careers so young, do you hope to continue to make music for many years?

I think the three of us are really married to the idea of playing until we’re really old since we have so much fun doing it. We all just want to keep writing and playing for the longest time possible!

Outside of music, what other hobbies and interests do each of you have?

We like to read, draw, watch anime, listen to music, play video games. Really just anything a normal teenager also does.

We like listening to My Chemical Romance, Panic At The Disco, Muse, Fall Out Boy, Pierce The Veil, and Shinedown, to name a few.

Do you have any rituals you perform before going on stage?

We usually gather the team and say a little prayer and then run up on stage.

Your debut album, XXI CENTURY BLOOD, was released in March of last year and you’ve been performing since then. What can fans expect for the remainder of 2018?

Well, we’re planning on playing as much as we can, and we’re currently working on our second album! But so far this year has been great! A lot of unforgettable things have happened like opening the two nights for The Killers in Monterrey’s Arena and playing at the Hell & Heaven Festival in Mexico City with a lot of bands that we admire so much like Ozzy Osbourne, Megadeth, Deep Purple, Scorpions, and so many others.