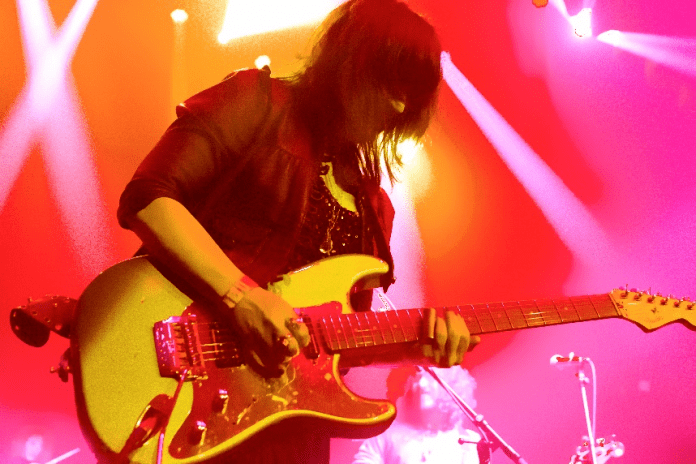 I love Gov’t Mule, and when I met Jorgen, we got into a deep chat about production and decided to try recording together. I was thrilled—and a bit terrified. He’s one of rock’s greatest bassists; a truly intimidating musician. Luckily, he’s also very nice. We hit the studio when he was on the East Coast and had a blast laying down some tracks—without necessarily trying to make a record. But the session went so well that it became A Zillion Stars Overhead— “five fiery tracks of searing guitar rock,” as the Jersey Journal calls it.

The EP opens with a nine-minute rock/jam version of “When It Comes Down” that features killer playing from Jorgen and John, and my live-in-the-studio guitar solo. We also did a dreamy rock cover of “The Needle and the Damage Done.”  The EP includes a catchy disco/rock song, “Stay,” which I threw into the mix because Jorgen grew up in Sweden and is an ABBA fan. The record closes with “Canna Indica,” a trippy guitar instrumental I played in this tuning: C#G#C#FG#C#.

I knew this was a special project, so I reached out to my dream mixer, Sylvia Massy. I was over the moon that she agreed to do it! She brought out the power in the recording and gave it a beautiful shimmer. She also cut a radio-friendly version of “When It Comes Down.”

Growing up in the Midwest, I longed to play electric guitar but got the message that this was not for women. I am so glad girls get a far more encouraging message today—thanks to Guitar Girl Magazine and other outlets. After seeing Bonnie Raitt my senior year of college, I bought a Fender Mustang in a pawnshop and moved to New York City. There, I joined punk bands, teaching myself to play along the way. I toured all over the US, Canada, and Europe. I loved being able to see the world because I played guitar.

Eventually, I started my own band and developed a ‘70s-influenced classic rock/blues-rock vibe. Blues guitarists like Son Seals and Freddie King had an impact on me. I love jamming, too, as is obvious on A Zillion Stars Overhead!

What is your definition of tone, and how has it changed over the years?
Starting off in punk bands, my holy grail was a Marshall stack. But all I could afford was the single-speaker Marshall Reverb amp. It packed a punch, though! Then I had a hand-built wooden cabinet with two Celestion Sidewinder speakers that I would roll around. Finally, I got my 4 x12 Marshall cabinet and the Marshall JCM 2000 Triple Series Lead head. I felt very macho!

I needed something that loud for the band I was touring with at the time. The songs were in drop tunings and needed that thick bottom end. But I didn’t like the fuzzy distortion channel on the amp, so I used a BOSS Metal Zone pedal with just a little gain from the amp. That combination had great tone and fabulous chonk.

When I started singing, I discovered that I sound more like Sheryl Crow than Al Jorgensen. I had to dial down the distortion and ease up on my rhythm playing to make space for my voice. On A Zillion Stars Overhead, I mostly used my versatile Homestead HS50 combo amp and an Orange AD30. I also used a JCM-800 Marshall head and 4 x12 1960 cabinet. I shoot for vintage warmth with modern power and punch.

Which guitars, amps, and pedals are you currently using and why?
My main guitar is a 1986 Fender Stratocaster hot-rodded with jumbo frets, Seymour Duncan Vintage Rails, and a Hot Rails humbucker in the bridge. I also play a 1992 mahogany Les Paul Special, customized with a Gibson super-ceramic humbucker in the bridge. My acoustic is a 1964 Gibson J-45 that gets better sounding every year. And I have a beautiful Stylus prototype guitar with 24 frets, created by luthier Aaron Green.

I also play a Fender Telecaster tuned to Open-E for slide on songs like “One Way Out” by the Allman Brothers Band. I use the Rock Slide, an innovative slide with a dished-out segment that keeps it from rolling on your finger, and a cutaway that makes fretting more comfortable.

I play the HS50 2 x10 combo amp from Homestead Amplifiers, a company I endorse. This amp was developed by Homestead founder Peter McMahon with Warren Haynes during the recording of his Ashes and Dust album. The amp has two Celestion V-30 speakers. It’s full-bodied but also beautifully glassy and well-balanced.

What I love most is how responsive and dynamic the HS50 is, with sweet harmonics. It really sings, even at low volume, and has gorgeous reverb and three pull switches: Bass Cut, Mid Boost, and Bright. Honestly, this amp makes me play better!

I use BOSS pedals because they do not suck tone, unlike many pedals. On my Pedal Train board, I have Warren Haynes’s old G-Lab wah-wah pedal that Peter McMahon lent me, and three BOSS distortion pedals: Super OverDrive SD-1 for vintage bluesy tones, OverDrive Distortion OS-2 for modern bluesy tones, and Waza Craft Metal Zone. The Waza Craft Metal Zone has a new Custom mode that sounds natural and open—perfect for a rounded blues-rock tone. I use the BOSS Digital Delay DD-5 and the TC Electronic Polytune2.

My secret weapon is a Hughes & Kettner Tube Rotosphere MK II on loan to me from Lisa Swarbrick, a talented songwriter who was married to Gov’t Mule guitar tech Brian Farmer. This is his Rotosphere, and it provides a stunning Leslie-speaker sound. I find it works best last in my chain.

What about strings?
I use and endorse DR Strings. DR Strings feel more stretchy and playable to me, yet they stay in tune and maintain a crisp tone better than any other strings I’ve tried. They sound awesome! I love that they come in a 9.5 gauge, which is perfect on my Strat. I use 10s on my Les Paul.

Are there certain recording techniques you prefer in the studio?
For distorted tones, I like to put several mics on the guitar amp—one close up at a right angle to the speaker cone, one a few feet away, and, ideally, a 360-mic in the room. Then I crank up the amp until it really starts to sing and give off nice harmonics. I like to use a long enough cable to get away from the volume but also get near the amp when I want feedback. Use a top-quality cable, so it doesn’t diminish the sound in any way.

For recording acoustic guitar, I use a slim condenser mic on the neck like the Shure SM81 and try a more dynamic tube mic about twelve to sixteen inches away from the 12th fret of the guitar. You don’t want to put a mic in front of the soundhole. That can get too bass-y.

How do you keep your sound consistent onstage?
I try to keep my stage volume in that sweet spot where it’s getting a nice tone but isn’t too loud. This gives the soundperson flexibility in mixing because the stage volume is not overwhelming. Always have a friend in the crowd listening to make sure the mix is good—and signaling you if there’s a problem.

If you’re sitting in with another band, make sure there is a mic on your amp! I learned this the hard way when I sat in with (former Gregg Allman keyboardist) Bruce Katz. My band opened for Bruce. After our set, I didn’t notice that the soundman moved the mic on my amp to another amp. As I was jamming with Bruce, I noticed Bruce giving me puzzled looks. He couldn’t hear my guitar in his monitor at all!

What does your practice consist of?
Because I jumped into original bands when I started playing, I never learned many covers. I’m changing that now that I have opportunities to sit in with other artists. So I always start practicing by working on a YouTube playlist of covers I’m learning.

I find learning something new on the guitar sticks in my head better if I write a song with it or learn a song that uses it. I learned to play slide in Open-E by learning “One Way Out,” for example. I developed my major-scale pentatonic playing by stealing Warren Haynes licks on “Soulshine.” I wrote several songs in DADGAD when I learned that tuning. If I learn something, but I don’t use it, I forget it.

I always start with “Cissy Strut” by The Meters to warm up. I play little chromatic exercises along to it, plus some fun speed-picking exercises I learned from a Yngwie Malmsteen video lesson, believe it or not! Then I jam with live versions of Freddie King and Eric Clapton playing “Farther On Up the Road” and Stevie Ray Vaughan’s “Mary Had a Little Lamb.” I force myself to solo in all different sections of the neck. The Joe Pass CAGED system makes the most sense to me in terms of opening up the neck, so I use it. Then, I work on my new songs and any solos I’m working out.

As a self-taught musician, I didn’t learn any theory. I’m filling in that gap now with Music Theory You Can Use: One Man’s Journey Toward Understanding the Guitar by Steve Maase, edited after his passing by his daughter, guitarist Lily Maase.

Favorite guitar riff or lick that inspired you to play guitar?
Jimmy Page’s heavy, twisted, odd-time riff from “The Ocean.” I spent hours puzzling that thing out!

What is your advice for young women who hope to work in the music industry?
Anyone entering the music industry has to be very innovative and creative—as it is so in flux right now. Be confident and know that you have something to contribute no matter how rudimentary your skill level. You have your own unique voice and sound, and that is the most valuable contribution to music that anyone can make. And don’t sleep with your bandmates—that creates way too much drama!