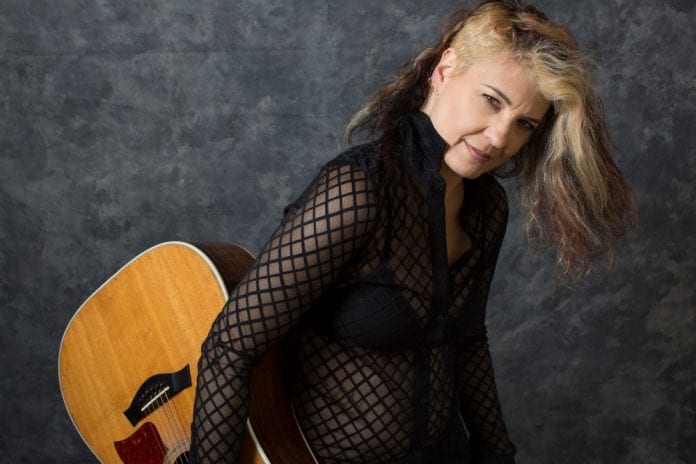 Hi Guitar Girls! I’m Janet Robin. I’m obsessed with guitar and playing music. I have been since I was age six. I was lucky to have had lessons with the late, great Randy Rhoads at the age of nine to fifteen years old until he got the gig with Ozzy. I grew up in North Hollywood, CA, and he taught at his mom’s music school down the street.

I went on to become a member of Precious Metal in the ’80s while I was still in high school. We were amongst some of the only all-female rock bands around at that time, and we managed to get signed twice to two labels—Polygram and Capitol/Chameleon. I cut my teeth in that band recording and touring all over, and getting a feel for what it was like to make a living being a musician. When we finally broke up in 1991, I put myself back out in the business to take on whatever project would come my way so that I could continue working as a musician, and again luck (or hard work as I usually put it) came my way to become a member of Lindsey Buckingham’s first solo band. We toured all over the US and Canada including opening for Tina Turner. Another eye-opening experience.

I was then inspired and mentored by Lindsey to do my own solo project and started recording and releasing records (seven CDs) and touring all over the world. I’ve continued to have other side-musician gigs while doing that, including Michelle Shocked, Meredith Brooks, Air Supply, Sara Bettens, and more, as well as session work and composing for film and TV.

In 2015, I started a special project “The String Revolution,” featuring only four guitar players playing unique instrumental arrangements of originals and covers. We started touring, and in 2019, we were invited to perform at The GRAMMY Museum. We’re currently excited that some of our hard work is paying off and our Spotify streams have reached over 2 million. In addition, I’m excited to be working on a new recording project that involves combining original early 20th century blues recordings with new instrumentation and arrangements.

I also teach a select few guitar students out of my studio in LA so that I can pay it forward! I have enjoyed working with several actors for guitar scenes in film and TV including Academy Award Nominee Jennifer Jason Leigh for Quentin Tarantino’s Hateful Eight film.

I’m grateful to be a working musician and for all the amazing experiences I’ve had thus far.

Tone, in regards playing your guitar, to me, is how you approach your touch to the guitar— strumming and fingerpicking on fretboard work, right hand and left hand, meaning your style of dynamics (soft/loud), the strength of your fingers and hands (how hard you press certain chords or strings), and, for example, the way you bend a string. Basically, to me, tone is your overall approach in your own unique way to the way you play your guitar. Now, in combination with the kind of guitar, the kind of strings, the kind of pick, the kind of amp, and any pedals you play—that is more of a technical tone. And when used in combination with your “approach” in your playing, you can definitely create a super unique sound with these choices.

RELATED ARTICLE: Janet Robin on The String Revolution: An Orchestra of Guitars

Currently, I’ve been using my Taylor DCSM a lot lately. That’s because I’m in an all-acoustic guitar band presently (The String Revolution). However, I’ve also been using my ’52 Tele a lot for a blues recording project I’m working on. But I have about 25 guitars, and they are all my family and used for various types of projects. As for amps, I have a Fender Blues Junior and the larger Fender Blues Deluxe. Both are great for me for recording or any live gigs I have with an electric guitar.

In regards to pedals, I’m a bit of a purist, so I only use a small amount of pedals, and it really depends on what I’m playing and who I’m playing with. For my solo band, which includes both acoustic and electric playing, I use a BOSS Tuner, MXR Boost, MXR Carbon Copy (delay), TC Ditto Looper, and a Xotic SL Drive Overdrive. And for The String Revolution (my acoustic guitar band), I mostly use the boost and tuner, although we are experimenting more with the loop pedal now.

DR 10s for my electric, and Martin SPs for my acoustic. Love the feel on those strings. I’m not into coated strings, but I know a lot of people like that.

Well, that depends on what I’m recording. I love tracking with the full band and doing a scratch vocal at the same time because that feels the most natural as to how I would play the song live. If you record in parts, it’s harder to get a “band vibe,” in my opinion, but you can still get good performances if you need to record separately. It just isn’t my favorite way of recording.

After a few takes of the full band tracking, I like to focus on the best take and then maybe punch in or clean up certain parts if needed. And then do a few overdubs but not a lot. The next thing I like to do is the main vocal, then any extra bg vocals or instrument overdubs after the main vocal is set.

Other things I like in the studio: if you’re doing an electric guitar part, sometimes a small amp in a confined area with the right mic might sound better then a bigger/louder amp. I think you have more control in the studio with a small amp, and also you get a real intimate-up-close sound, which I personally like. For home studios where you’re not really able to use a live amp, The Eleven Rack actually has amazing guitar sounds for recording.

Well, that can depend on the venue and the sound (PA) that’s available as well, so it’s important to note; you have to develop really good dynamic techniques in your playing to deal with possible issues at different venues because of course, they are all different. The first thing is to keep your stage volume low—not too low but not too loud The sound person can control the overall sound better if the onstage volume is on the lower side.

If you don’t trust the sound person, maybe bump up your stage volume but be conscious of the vocals and the other players in the band and again, use dynamics in your playing. A boost pedal can really come in handy for certain parts to stand out and/or lead parts. If you’re playing with a full band, you really need to be aware of everyone’s volume and find a volume that works best on stage for everyone without overpowering the vocalist. If you have in-ears, that is a great way to monitor—way less chance of feedback and also less sound overall on stage, and everyone can hear themselves well. However, I usually take one ear off so I can also hear the natural sound of the band on stage and the audience. It can be tricky to be exactly consistent unless you’re traveling with a major artist that is bringing their own sound/light gear, staging, etc. Even so, soundcheck is always advisable. 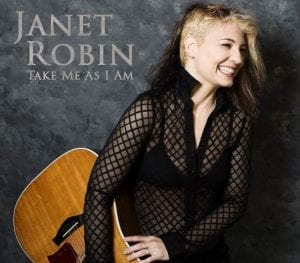 That depends on what I personally have coming up. I used to practice scales and modes and some right hand and left hand exercises. But mostly now, I practice for specific reasons. Either songs I have written or I’m working on, specific parts I might have trouble with, and also if I’m singing and playing at the same time and need to work on that.

Usually, I focus in on certain parts I might be struggling with and do repetitions. Sometimes I record the rhythm part behind it, and I practice to that for a lead or color part. I sometimes use a metronome as well. Since I’m a working musician doing sessions, playing in my own solo band, and my other guitar band, my practicing is more focused on what’s on the table right now or what might be coming up so that I’m prepared.

There are so many things I could say, but I’ll try and narrow it down.

First of all, do not give up on your craft. You have to work hard. Surround yourself with other musicians who work hard and are supportive. You will have to be willing to sacrifice certain things in your life if you want to dedicate yourself to music. Don’t let someone tell you that you can’t do something. Set goals and find realistic ways to reach them. Think out of the box. Be unique; don’t try to be like someone else!

Earn respect by being a pro on all levels—show up on time, know your parts, and be a team player. Choosing to be a musician as a career means it will also be a lifestyle. It means long days, late nights, sometimes strange people, and sometimes inappropriate people and situations. You have to navigate through those situations and stand up for yourself and protect yourself many times, especially as a woman, so don’t be afraid, you deserve respect.

I’ll be real specific here. If you’re in your 20s, maybe it’s not the best time to be in a committed relationship or live with someone just yet, unless that person has their own passion they are also pursuing and completely support you 100%. It can be really hard to have relationships when you are trying to set up your career as a working musician. It doesn’t mean you can’t have relationships, but you have to make sure it doesn’t get in the way of your career when you are starting out. After more establishment of your career, it may be something you’d like to have in your life, and you might be able to juggle to the two better when you’re a little older. Of course, this is just my own opinion. There are so many other things I could say, but really, it’s about believing in yourself and not only working hard but working smart.