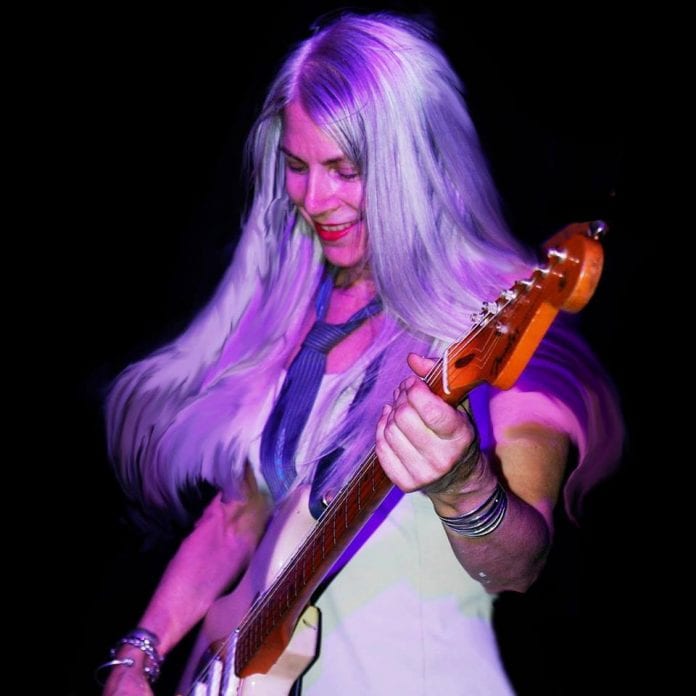 I’m a guitarist/vocalist/songwriter originally from Seattle, a long-time resident of Los Angeles where I studied music at The Guitar Institute of Technology, later earned two more degrees at Cal State L.A. (BA Jazz Studies, MA Commercial Music), recorded and produced several CD’s one of which was recognized by the Grammy Association (“Best Electric Blues Artist”), played in probably hundreds of bands, worked with some of the best (Jeff Buckley, Bo Diddley…), hosted a Pro Blues Jam for ten years and now I am back in the NW living in Portland Oregon where I have my own Blues band (The Blues Tools) among other projects. That’s a long sentence! At the moment, my main focus is getting my new CD out there and producing a video for my song, “The Best Of Me,” something I wrote with a message for a victim of abuse. I worked as a volunteer at a shelter for close to three years, and I’m determined to get this song and video heard. I think there needs to be a better understanding of the dynamics of abuse and how very difficult it is to get out of a situation like that

Aside from that, I am enjoying my many projects in Portland, Oregon where I have lived for five years. I have a blues band (Kathryn Grimm and the Blues Tools), a psychedelic jazz-rock trio (Hippie Love Slave), a duo with the dynamic female guitarist-singer Sonny Hess (The Strumbroads), and a jazz trio (The Jazz Rockets). All of these projects allow me to play the styles of music I love.

Tone to me is the quality of sound I get from my gear. This is such an in-depth topic for guitarists that I know and getting that “perfect tone” is the ultimate goal and object of endless conversation. There are many things involved in getting that – the obvious being the guitar amp, the guitar, and the effects. Equally important though is a player’s touch. Two guitarists playing through the same gear can have two very different sounds (tones) due to their touch.

My gear has changed dramatically over the years. From a full stack (Sound City cabinets, same brand used by Hendrix), a top of the line Soldano X99 head (I used to work for Mike Soldano), and loads of rack effects to the current stripped down set up I use now of primarily a Fender Blues Jr., an occasional pedal (and sometimes pedal board), and a 2013 Paul Reed Smith Custom guitar. Part of the reason for this small set up is for convenience – the amp is light, just twenty pounds. I just don’t like to cart a bunch of gear around these days. Most of the reason though is the desire for a simple organic sound. A clean amp, a great guitar, a stomp box or two – that’s mostly what I’m using when I play with The Blues Tools. The Blues Jr. has its own great crunch so sometimes I set it for that and skip the distortion pedal. With Hippie Love Slave, I do have a pedal board with a few more gadgets for a larger variety of sounds (TC Electronics delay, Phase 90, volume boost…). For gigs where I need more punch, I’ll use my favorite amp of all time – a ’57 vintage Fender Bassman. This amp is what many companies admittedly have copied from for years.  It has a flawless clean tone with no reverb.

My best “trick” of late is not doing everything by myself. I’ve produced a lot of my own recordings which I enjoy but to me, it’s just another hat to wear. I’m lucky I have found three engineers with excellent skills who I trust allowing me to focus on just playing/singing. It’s been good for me to hand over some of the duties, something I was reluctant to do for a long time. It’s important to have an engineer/producer who is easy-going and a good listener. I’ve had many who weren’t, and I ended up with something that was not me.

The beauty of a simple set up is that there is less to go wrong. I was always having problems when I had a lot of gear onstage. That’s number one. Second, I don’t use a volume pedal or my hand on the volume knob to manipulate the volume. I normally start with a clean sound on my amp and use a pedal to get added volume or crunch.

That varies from week to week depending on what gigs I have, but for guitar or bass, I do something every day. That is the ticket to maintaining a certain level of proficiency – being consistent about some sort of daily practice. Sometimes that may just be going over songs. Doing five minutes of simple warm-ups helps if that is all the time there is. Vocals are more delicate and persnickety and can be unpredictable. Living a clean life (very little drinking, enough sleep, definitely no smoking of any kind) – this isn’t rocket science. The voice will last forever if one takes care of themselves. Doing a few drills every day, minimum, for the voice also keeps it supple and in shape.

This is so important – first and foremost, be yourself. Of course, we have our influences and heroes, I have had many who have inspired me to be better. Everyone has their own life experience to write about. There is no need to copy anything.

Second – invest in yourself. We live in a world now where we can write, record and distribute music on our own. We don’t really need the big labels anymore to launch our careers. The only thing they are good for anymore is the massive marketing they can do for an artist. The artist eventually pays for that though. An indie artist can avoid the years of waiting and going into huge debt with a label by doing their own marketing or hiring someone to do it for them.

Third (and fourth, etc..) – if you want to be a songwriter – have an interesting life that is worth writing about. Learn something, love something, be afraid, and do something. Stay inspired. Listen to every style of music – jazz, blues, rock, opera, rap. Play music with people much better than you. You don’t need degrees to write great songs. Listen to some Dolly – honest songs about her life using simple language. That is real. With all my degrees and education and love for all styles, I connect most to very simple music.