Home Interviews WILDWOOD on Her New Single ‘Moonrise’ and on Playing any Stringed Instrument... 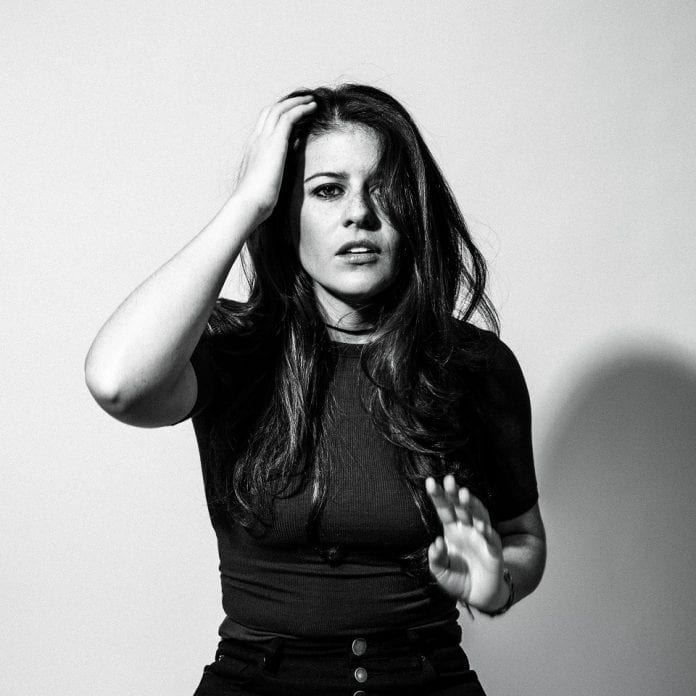 This up and coming Nashville-based singer-songwriter is set to release her first single “Moonrise” tomorrow on Nashsville’s indie record label South X Sea. A descendant of the Carter family, she pays homage to the family’s 1928 song “Wildwood Flower” with the stage name WILDWOOD.

Prior to embarking on her musical career, WILDWOOD graduated from Harvard, was a diplomat at the US Embassy in Paris, worked with Governor Haslam creating the Tennessee Promise program, and founded a non-profit organization in Nashville that serves refugee youth.

Not only a songwriter, WILDWOOD is also a multi-instrumentalist, and I find it quite impressive that she plays all the stringed instruments on her first single – her Ibanez guitar, a violin, and a viola – which all blend together superbly in this hauntingly beautiful ballad she calls “Moonrise.”

Read on to learn more about WILDWOOD’s background, her instruments, and what’s next for this rising artist. 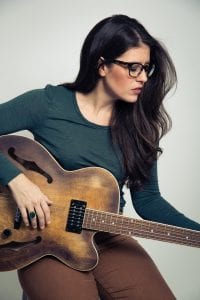 GGM:  Reading your bio, you have quite an impressive background. Can you tell us a little about yourself before we delve into your musical background?

WW: I grew up in Peachtree City, GA, the daughter of two school teachers. Unlike a lot of people who move to Nashville as a teenager to chase their music dreams, I went to college and grad school first, and I lived and worked abroad in France twice along the way. It wasn’t until after graduating from Harvard with a Master’s degree that I made my own pilgrimage to Music City to chase my dreams. When I first moved to Nashville, I actually worked as a policy advisor for Governor Bill Haslam for a few years before I was able to sustain myself as a touring artist and fiddle player, songwriter, and session player.

GGM:  Not to get too deeply into politics, but with your background in government service and your work with a non-profit that serves the refugee youth of Nashville, it must pain you to see the refugee crisis throughout the world today. What can local communities do to assist in this crisis, and if someone is interested in volunteering, where would you recommend they start?

WW:  1 in every 122 humans is a refugee. If the refugee population were a country, it would be the world’s 24th largest. Global displacement is currently at its highest level ever recorded, which is why I try to help refugees in my community. We can’t always influence decisions made at the highest levels of government, but we can influence the people around us. Local communities can support refugees by being welcoming and treating them like their friends and neighbors. If someone is interested in volunteering, Google is a great place to start. Simply search for refugee resettlement organizations in your area. There are likely many ways to get involved and volunteer right in your own backyard.

“Being a Carter is how I got into music – my two uncles,
Bugs and Mike, had a recording studio in Bristol, VA
when I was little, and I first got to sing into an old
ribbon microphone there when I was 7.”

GGM:  Now on to your musical background. You have now decided it is time to pursue your dreams of being a musician. You’re a Third Generation of the Carter family? So, I’m assuming it’s in your blood?

WW:  It sure feels like it! AP Carter was my great uncle, and June Carter Cash was my grandma’s first cousin. They were best friends, so I was lucky enough to know her and John when I was a kid. Being a Carter is how I got into music – my two uncles, Bugs and Mike, had a recording studio in Bristol, VA when I was little, and I first got to sing into an old ribbon microphone there when I was 7. It changed my life. (In fact, Bugs was who gave me my first violin, too. If it weren’t for him, I likely would never have been in music.). Neither of my parents is musical, so I owe a lot of my early exposure to music to my Carter Family relatives.

“The story is this:  there’s a flower in the
wildwood that is loved and promised to be loved.
Then one day, her love leaves and she’s left sad and neglected.”

GGM:  Known by the moniker WILDWOOD, tell us how that came about?

WW:  The name WILDWOOD comes from a Carter Family song recorded in 1928, “The Wildwood Flower.” The lyrics are melancholy and remind me of Appalachia. The story is this:  there’s a flower in the wildwood that is loved and promised to be loved. Then one day, her love leaves and she’s left sad and neglected. My family in Appalachia has always dealt with many trials, and there’s this tangible soberness that exists there – at least for us there always was. It’s what gave the music such depth. WILDWOOD as a name pays homage to my Carter Family roots, as well as hints at this darker side of life that is the theme of my songs.

“I’ll play just about any stringed
instrument I can get my hands on!”

WW:  My first instrument was the violin. I began playing at age six. I was trained classically on that and then taught myself piano and guitar for a few years until my mom finally let me take piano and guitar lessons in high school. Since then I’ve learned viola, mandolin, and banjo. I once had an autoharp (what Sara Carter played, a very traditional Appalachian instrument), but I no longer have it. I’ll play just about any stringed instrument I can get my hands on! (My cousin out in California is currently making me a custom electric mandolin modeled after one that Martie Maguire of the Dixie Chicks plays, and I can’t wait to get it. He’s been working on it for months!)

“I have more musical instruments
than furniture in my 600 sq-ft apartment!”

GGM:  What was your desire to pursue those instruments and how did you approach the process?

WW:  When I was little, my uncle Bugs promised to get an instrument for me and each of my cousins. I actually wanted a harp. He sweetly rejected that idea, given a harp’s size and cost, and offered, “How about a fiddle instead?” At the time, I wasn’t too interested – I really wanted that harp! But soon enough, my mom and dad signed me up for violin lessons, and that’s when my love affair with music began. I took classical violin lessons for almost a decade, and I also started teaching myself piano during that time. I was so infatuated with the piano – I just loved it for some reason. It wasn’t until high school that I really started getting into guitar, and in college, that same uncle who gave me my first violin when I was six gave me a mandolin. Since living in Nashville, I’ve acquired a banjo, viola, and several new guitars, including 2 acoustic mini Taylor’s and a hollow-body Ibanez that I mostly play. Previously, I had a 1972 Martin (still have it) and a custom Tipton electric guitar. (I have more musical instruments than furniture in my 600 sq-ft apartment! In total, I have 2 acoustic violins, a viola, an electric violin, a mandolin, a keyboard, 3 acoustic guitars, and 2 electric guitars. And I have a rainstick. Wow… I’ve never really counted before! Haha!)

“The moon was huge and orange,
rising up in the night sky,
and it looked so spooky and ominous.”

GGM:  Your first song titled “Moonrise” (which also has a special meaning behind the name) will be released tomorrow. Share with our readers the inspiration behind the song.

WW:  I came up with the idea for “Moonrise” when I was in my apartment in Nashville at my piano one night staring out the window. The moon was huge and orange, rising up in the night sky, and it looked so spooky and ominous. I thought, when the moon rises, it sets the scene for darkness and uncertainty in the night. I held onto the idea for a while and brought it with me to a co-write with Brett Boyett in LA, where we wrote the song together months later, turning it into a ballad about the uncertainties of love. The basic idea of the song is that when things get hard, when it gets dark and scary, will you be there with me and stay with me through it? Or will you just leave when it gets tough? It expresses the doubts and fears of losing a love.

GGM:  I understand you played all the stringed instruments on the recording, particularly your Ibanez hollow-body. What was the process behind the recording of this new song?

WW:  I loved recording “Moonrise” because it’s the first time I’ve ever recorded all the live instruments on a song myself. Usually in Nashville, artists bring in session players – some of the best in the world – to create their songs. It was really special getting to do it all myself on this one. As for my recording process, I have a small studio set up in my apartment, so I recorded all the live instruments at home. I use Pro Tools recording software, a Focusrite Scarlett 2i2 interface, and a Sterling ST51 condenser microphone. First, I laid down the guitar part I wanted. Then, a violin part, creating it in real-time (that’s how I do all my strings recordings – just improv. I don’t write out any parts in advance – I just let the music move me). Then, a second, third, fourth violin part. Finally, I added a few viola parts. After that, I sent my recordings to my producer at South x Sea, Brandon Metcalf. He then added drum sounds, pads, and a few other layers to the track, all on the computer. I recorded my final vocals with him in the studio. It was really cool to have just the two of us work on the song because it allowed it to stay true to my original vision for it.

GGM:  Since this is the release of your first song, do you have other recordings under way that we can expect to hear this year?

WW:  I sure do! My second single is nearly finished and set to release in March or April. There are several other songs I’ve written for this project that will also come out this year via South x Sea Music.

GGM:  We have a few “fun” questions to let our readers learn a little more about you.

Top 3 songs on my playlist are:

One album I cannot live without is:  1989 by Taylor Swift

I would love to collaborate with:  Joy Williams

One thing people don’t know about me is:  I speak French fluently.

In one word, music to me is:  Expression

Stay tuned for WILDWOOD’s release of “Moonrise” tomorrow and to learn more about her, visit her site HERE.