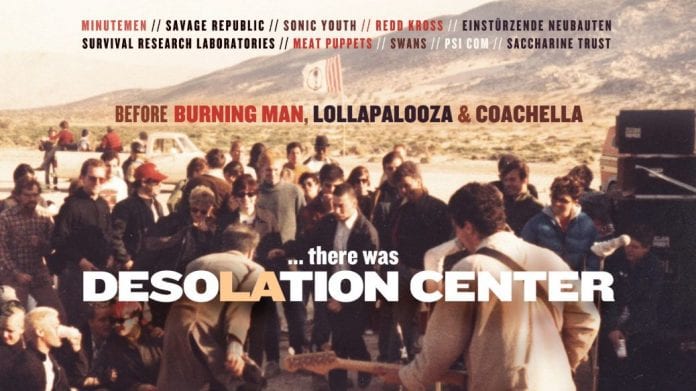 With live music on lockdown for the foreseeable future, this is the perfect time to catch up on some amazing, rarely seen footage of legendary outdoor shows. Desolation Center is the untold story of a series of guerrilla music and art performance happenings in the 80s which inspired the birth of contemporary festival culture including Burning Man, Lollapalooza, and Coachella.

The documentary (originally released in November 2019, and clocking in at 94 minutes in length) combines interviews of punk and post-punk luminaries with rare performance footage of Sonic Youth, Minutemen, Meat Puppets, Perry Farrell, Redd Kross, Einstürzende Neubauten, Survival Research Laboratories, Savage Republic and more, giving viewers unprecedented access to a time when pushing the boundaries of music, art, and performance was like an unspoken obligation.

On Tuesday, June 23 the film will be available digitally via Apple TV (iTunes), Google Play, Amazon Instant Video, and many more.

Mat Levy of the digital distributor Passion River Films pointed out to the Deadline site, “At a time where we need it most, Desolation Center celebrates radicalism at its finest. From the music, the movement, and the ultimate legacy these events have forever left us, we are absolutely thrilled to be a part of bringing Stuart Swezey’s groundbreaking story (that critics and audiences already love) to an expansive audience that will hopefully be inspired to create something wonderfully disruptive for the love of artistic expression.”

Directed by the organizer of the original events and co-founder of Amok Books, Stuart Swezey, Desolation Center tells the true story of how the risky, and at times even reckless, actions of a few outsiders were able to incite seismic cultural shifts. Swezey says, “Taking the music that I found so inspiring and placing it into the wide-open spaces of the California desert or on a boat in the industrial wasteland of LA Harbor became a personal challenge for me. The story of the Desolation Center events is told in the film by eyewitnesses who were participants whether as musicians, artists, organizers or concert-goers.”

The cultural significance of Desolation Center has not been lost on today’s top media outlets, with Rolling Stone calling it “a series of important but overlooked shows – nothing like it has been attempted since” and the New York Times declaring that: “Hundreds of punks hit the desert. The modern music festival was born.”

As Thurston Moore described to the New York Times, the mood was “one of complete joy and wonder at being together in a place that might as well have been another planet.” He said the most radical attribute of Desolation Center was that “it asked no permission,” and he called the show “one of the great moments” in the history of Sonic Youth.

Desolation Center has screened across the globe including the prestigious European CPH:DOX Film Festival in Denmark, Sheffield Doc/Fest in the UK and its US premiere at Slamdance Film Festival in Park City, Utah. It brought home Audience Awards at SF Indiefest and Chicago Underground Film Festival and was a selection of the 2019 Smithsonian Year of Music, Smithsonian Hirshhorn Museum in Washington, DC. Beginning in Fall 2019, Desolation Center screened in over 60 cities in North America including sold-out screenings in New York, San Francisco, Portland and Seattle.

Starting with the world premiere at CPH:DOX Festival in Copenhagen in March 2019, the response to the first festival screenings has been overwhelmingly positive. In advance of the Chicago Underground Film Festival, Rogerebert.com called Desolation Center “highly recommended . . . a comprehensive you-are-there recount of an unbelievable chapter in music history, made possible by the very facets that define punk rock. . . Desolation Center is like the anti-Fyre Festival doc: the music involved is anti-establishment as hell, the show is an art piece itself, and the whole DIY operation actually worked, a few times over.”

Additional acclaim has followed the doc since its release, including a 100% critics score on Rotten Tomatoes, and the Los Angeles Times adding that it is “A historical record of this short-lived time and this singularly L.A. scene…pure to the punk ethos.” 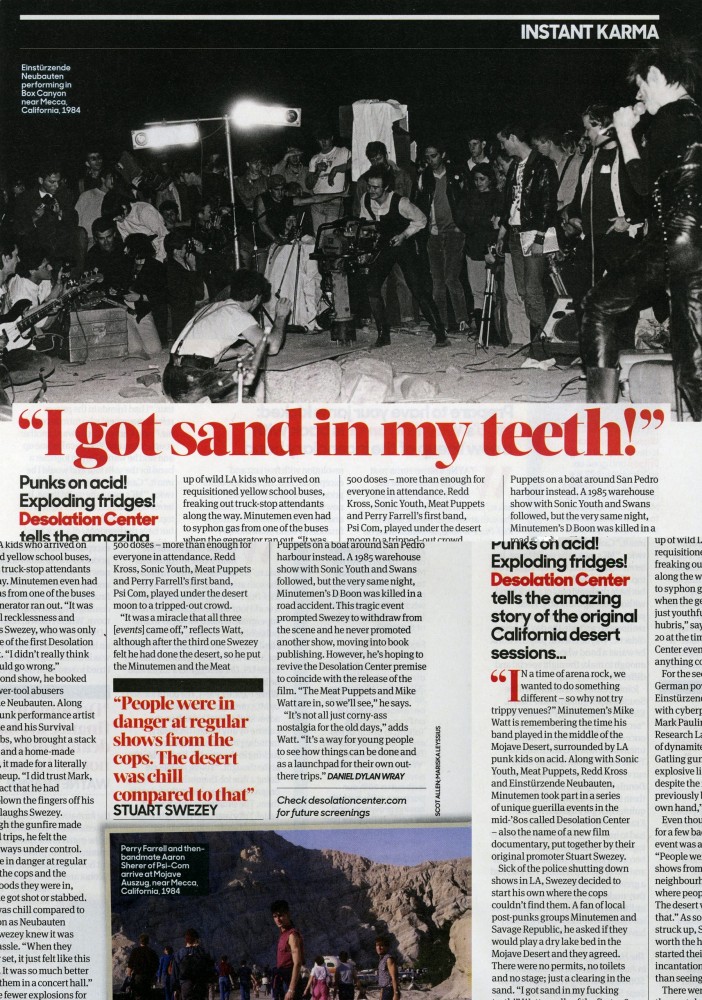