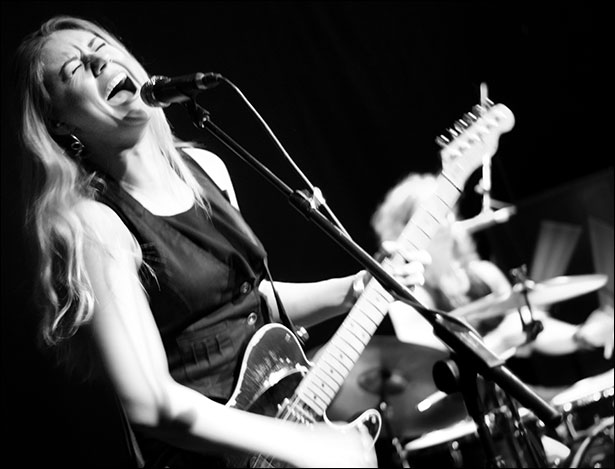 While producer Dave Stewart has produced Orianthi’s current album Heaven in This Hell, he is also responsible for discovering yet another guitarist.

Joanne Shaw Taylor, who we interviewed back in September, was born and raised in the Black Country, Joanne was originally discovered by Eurythmics’ Dave Stewart as a 16 year old guitar prodigy.

Through hard work and near-constant touring, she is now one of the hottest young names on the British Blues circuit. She is admired and respected by many leading blues guitarists including Joe Bonamassa.

A Birmingham native, Taylor is a phenomenal guitarist, singer/songwriter who is currently taking both sides of the Atlantic by storm.

Having received a nomination for ‘Best New Artist Debut’ at the British Blues Awards for White Sugar, her singing ability took voters by storm, and as a result, Taylor scooped consecutive wins in the ‘Best British Female Vocalist’ category in both 2010 and 2011.

Following her acclaimed performance alongside Annie Lennox at the Queen’s Diamond Jubilee concert in June 2012, the release of her critically acclaimed third studio album Almost Always Never, and a nationwide UK tour, the blues rock sensation will return to the UK on Sunday, May 12, 2013, for an exclusive London concert to record a new live DVD in the intimate setting of one of London’s most famous live music venues, The Borderline.

Taylor will perform tracks from her current album Almost Always Never, alongside crowd favorites taken from her two previous albums, her 2009 release White Sugar and 2010’s Diamonds in the Dirt.

As an electric guitarist, Joanne mixes many different genres into her blues-based music, including rock, blues, funk, and soul.

All of these music genres and influences represent sources of inspiration in her writing and playing abilities.

While, she has enough chops to keep up with the best in the business, she prefers having a solo career.

She notably relies on groove and emotion to draw in her audience, holding their attention until the last notes of the song.

In addition to her fretwork, she possesses a sultry voice that only accentuates her playing and adds another level of musicianship to her artistic palette.

Now, look for her to break into the notoriously hard-to-crack US market.