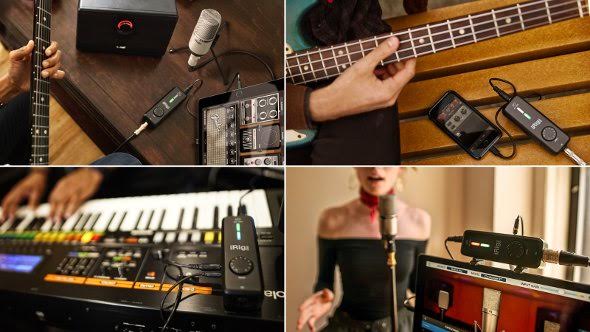 September 7, 2017 – IK Multimedia is proud to announce that iRig® Pro I/O, the cutting-edge high definition audio/MIDI interface for iPhone®, iPad® and Mac®, is now available in the Apple Store® at more than 200 locations worldwide and online.

iRig Pro I/O lets musicians connect all their gear to their mobile devices or computers to make music and produce audio, anytime and everywhere, with a portable, pocket-size mobile studio they can always carry with them.The combo microphone and instrument input allows users to record high definition, studio quality audio anywhere. A MIDI input and output allow to connect keyboards and controllers and a headphone output jack with a dedicated volume control is perfect for use with the new iPhone 7 and its future generations. iRig Pro I/O is a truly powerful, professional and portable recording solution that operates on AA batteries when connected to an iOS device, or on USB power when used with a Mac. When used with an optional power supply unit, it even charges a connected iPhone or iPad during extended sessions. A huge selection of IK’s award-winning apps and software is also included with iRig Pro I/O enabling complete music productions with a total value of more than $/€500.

Being certified MFi hardware (Made for iPhone and iPad) iRig Pro I/O is guaranteed to be plug-and-play on all iOS devices with a Lightning® port using the included Lightning cable while the USB cable included connects Mac computers. iRig Pro I/O works out of the box with popular Digital Audio Workstation (DAW) software like GarageBand®, Logic Pro® and more.

IK Multimedia is the leader of the mobile music creation revolution as the first company to utilize the power of the iPhone, tapping into it with products like the award-winning iRig line of guitar interfaces and AmpliTube amp modeling software allowing users to plug their guitars and basses into their phones and experience the most authentic amplifier tones and effects anywhere.

Today IK Multimedia offers more Apple certified music and audio creation and production hardware than any other manufacturer, with the widest range of interfaces, microphones, keyboards and other controllers for musicians, producers and podcasters available on the market. All of this is complemented by a full range of software and apps along with other accessories like stands, speakers and video accessories, focused on plug and play, portability and affordability that has made music and audio creation easier for millions of consumers around the world. With more than 50 million software and app downloads and over 2 million units of its iRig branded products sold since 2010, IK Multimedia is the undisputed leader in the mobile music creation category with over 70% market share.

iRig Pro I/O, together with the vast majority of IK Multimedia products are also “Made in Italy” in its fully owned state-of-the-art manufacturing facility that combines the highest quality processes together with a focus on unique Italian world class craftsmanship. This goes together with IK’s social responsibility standards that ensure compliance with the strictest labor regulations in the world along with eco-friendly programs, such as lessening environmental impact by reducing waste, employing smart recycling techniques and reducing power consumption by utilizing roof mounted solar panels to generate electricity.

iRig Pro I/O is available now from Apple.com and at more than 200 retail locations worldwide.

About IK Multimedia: IK Multimedia is a computer music technology company that offers a diverse range of affordable and easy-to-use music production tools with great sound quality and a realistic look and feel. With millions of installations worldwide, the IK range has been adopted by musicians of every level, from beginners to professionals, to gain access to high-end, studio-quality gear from their computers or mobile devices. iRig® and AmpliTube® are trademarks property of IK Multimedia Production. Mac, iPhone, iPad and Lightning are trademarks of Apple, Inc., registered in the U.S. and other countries. All other trademarks are property of their respective owners.