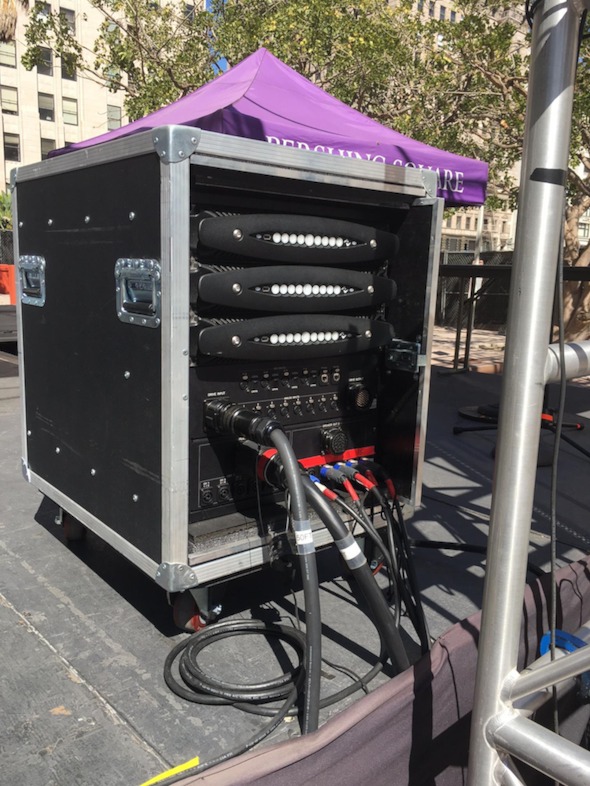 Each summer in the heart of Los Angeles, the City’s Department of Recreation and Parks hosts a series of free concerts at the Pershing Square Downtown Stage. The high profile concert series, which ran this year between July 12 and August 19, attracted over a dozen national touring artists including The B-52s, The Wallflowers, Meat Puppets, 10,000 Maniacs and L.A.-based punk trailblazers X — now celebrating their 40th anniversary. The eight-week music series, which drew thousands of local and international music fans, also featured sound reinforcement from a new integrated touring solution by BOSE Professional and Powersoft Audio.

The new ShowMatch compact line array system from BOSE Professional is part of an integrated system available worldwide — powered exclusively by Powersoft’s X Series amplifier platform. The Pershing Square concert series is among the first applications of the new system, which is designed to provide sound reinforcement across a diverse range of applications. Equipment rental firm CenterStaging of Burbank, CA, which also facilitates backline rentals for The Grammys among other high profile events, was responsible for integration and operation of the sound system for the concert series. 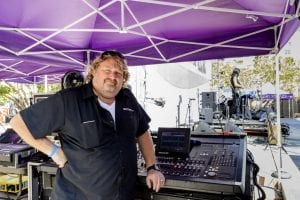 A perfect match
“When BOSE Professional was selecting a tour grade, concert quality amplification platform to sell to its ShowMatch system customers, the Powersoft X Series was the perfect fit,” said David Scheirman, director, global concert & rental business, BOSE Professional. “Our requirements included proven reliability on the road, as well as premium audio quality for any size application. Finally, we wanted the ultimate in flexibility and connectivity. Powersoft is highly regarded for its reliability and audio quality among rental company owners, touring sound mixers and sound reinforcement technicians all around the world. With its powerful Armonía Pro Audio Suite™ and its seamless Dante integration, the X Series platform was an easy choice to integrate with ShowMatch.”

The ShowMatch system was prepped by Camarillo, CA-based Rat Sound, which worked closely with BOSE Professional field engineers and CenterStaging staff to pre-configure the Powersoft X8 amplifiers prior to turning the packaged system over to CenterStaging for deployment. 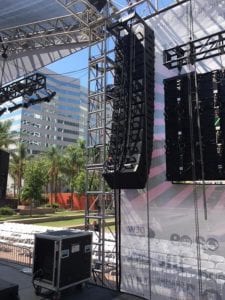 CenterStaging then suspended (12) ShowMatch modules per side for the main left and right hangs. Each array included two SM70x05 (70-degree horizontal, five-degree vertical) modules, eight SM100x05s, one SM100x10 and one SM120x20. The flown arrays were supported by (16) Bose SMS118 single 18-inch subwoofers below the front edge of the stage, configured as a ‘broadside’ array to shape and control the low-frequency energy impact zone in the target audience area. Two SM100x20 enclosures were positioned on the downstage edge to serve the forward VIP seating area.

Each subwoofer was configured using Powersoft’s Armonía Pro Audio Suite™ to individually circuit each subwoofer in a cascaded delay format. This enabled CenterStaging to control and shape the low frequency coverage area to prevent audio bleed into areas outside the target-seating zone, while avoiding spill into adjacent streets and the surrounding neighborhood — which included apartment buildings, retail complexes and hotels.

X in the city
The ShowMatch array system was driven by three Powersoft X8 amplifiers situated in one compact rack per side, outputting a total of 48 individual channels of amplifier gain. Each X8 is able to support AES3, two redundant Dante digital audio streams and analog inputs — enabling customers of the BOSE Professional ShowMatch system to access up to four different input sources per channel. Meantime, Powersoft’s Armonía software interface is an exceptional monitoring platform for the system, enabling fluid operation with BOSE ShowMatch DSP preset library. This makes for a seamless experience for the system operator.

“Being situated in a downtown area with all these buildings and restaurants around, it can be a little challenging to get the sound where you want it,” said James “Jimbo” Neal, general manager of CenterStaging. “You need a very ‘steerable’ rig, but you need exceptional audience coverage. The combination of BOSE Professional’s ShowMatch and Powersoft really delivered in this regard, and there were no failures. This is some great technology, and everyone working there was very, very pleased.”

Staging success
One of the Pershing Square concert series highlights was The B-52s, who performedSaturday evening, August 12th. “My gauge on how a system sounds is the audience, and as they were walking out past the riser, they were saying ‘Thank you, well done’,” says Frank Gallagher, the band’s front of house mixer. “The band came out and we had an amazing evening. My experience mixing on the BOSE ShowMatch and Powersoft system was enlightening, so now I am a believer. There was so much power that I wasn’t even tickling the system — the truth is I am very impressed and I am going to use this system again.”

Chris Conley, FOH engineer for Los Lonely Boys, mixed their show at Pershing Square on July 29th: “Everything was smooth, and this is my favorite new rig,” he said. “The system sounded really rich and the subs were super punchy. Also, I had a ton of headroom — I pushed the amps, but they just took it and never went into the yellow or red. For me to push that rig at 121 dB and the amps to stay in the green is pretty awesome.”

“We are very pleased to have worked alongside BOSE Professional on this integrated platform, designed specifically for a range of touring applications,” commented Jon Garner, U.S. Sales & Logistics Manager, Powersoft. “For the Pershing Square concert series, we didn’t experience a single failure and our amplifiers performed flawlessly as expected. Meantime, the ShowMatch line arrays produced fantastic sound and a targeted, even dispersion. It was an exceptional experience all around for both companies and we look forward to many more projects together.”

About Powersoft:
Powersoft is the world leader in lightweight, high power, single rack space, energy efficient amplifiers for the professional audio market. Founded in Italy in 1995, headquartered in Florence, Italy, with offices in Camarillo, CA, Powersoft couples the experience and precision of its production department with exceptional components to deliver products with perfect audio response and high performance reliability. Its state-of-the-art amplifiers can be found in an array of markets, ranging from stadiums, sporting arenas, theme parks, performance venues and airports to convention centres, churches and clubs, and are used by the world’s leading tour sound companies. For more information, visit the Powersoft website @ www.powersoft-audio.com