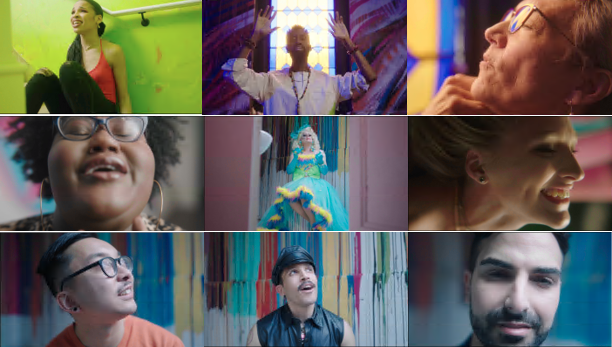 NEW YORK, NY – JUNE 11TH, 2021 – Multi-Platinum DC trio SHAED launched The Colorful Campaign today; an ongoing partnership with Capital Pride Alliance and The Ally Coalition. Inspired by the song “Colorful” from the band’s debut album High Dive, The Colorful Campaign will raise money for the GivePride365 fund, which provides resources for LGBTQ+ organizations in need. Money will be raised via streaming revenue from SHAED’s “Colorful,” artist collaborations, remixes and features, partnerships with local business and organizations, events and more.

I knew I was gay by the time I was 13. When I entered high school, I felt isolated and depressed as a closeted gay kid at an all-boys Catholic school where every other insult was “faggot.” The worst part about it was that my twin brother, Spencer, and best friend, Chelsea, had no idea what I was going through because I was too afraid to tell them. It wasn’t until I mustered up the liquid courage at age 19 to come out to them that I was finally able to breathe in deeply and imagine a future for myself that wasn’t built on a lie. They were the first two people I told and their immediate support made me feel proud of that part of me I’d been shameful of for so long. When we were writing our album, we looked into our past at pivotal moments in our lives that made us who we are today and one of those experiences we shared together was my coming out to them. This inspired our song “Colorful.”

We wrote this song to hopefully reach the ears of people who are LGBTQ+ and struggling (like I did) to embrace who they are. We wanted the song to have an impact on the LGBTQ+ community in our hometown of Washington DC so we partnered with Capital Pride Alliance to launch the Colorful Campaign. This campaign raises money for LGBTQ+ organizations in DC through remixes of our song “Colorful” featuring LGBTQ+ artists, and through partnerships with local businesses.

We spent an incredibly moving day with members of the LGBTQ+ community here in Washington DC and filmed the “Colorful” music video to celebrate them. Hearing their stories and witnessing their strength, despite the hardships they’ve been through, reassured us of the undeniable importance of love and support for the LGBTQ+ community. The “Colorful” music video is out today as well as the first “Colorful” remix with the mega-talented @richmusicrich.

Love you all – SHAED’s Max Ernst

Coinciding with the launch of The Colorful Campaign today, SHAED has released the official music video for “Colorful,” which features LGBTQ+ fans and DC community members – WATCH HERE. The band will premiere the video in-person tonight at the Capital Pride Honors in DC, an event honoring key leaders in the LGBTQ+ community.

Additionally, SHAED has released the first in a series of remixes and features with “Colorful Feat Rich” – a new version of the track featuring gay artist and influencer richmusicrich, who the band’s Chelsea Lee discovered on TikTok – STREAM HERE. As with the original version of “Colorful” all net proceeds will be donated to the GivePride365 fund.