Home News Music News The Acoustic Music of Raven and Red Soars on New CD, We... 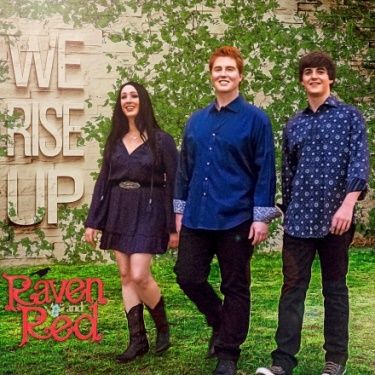 NASHVILLE, TN – Acoustic trio Raven and Red announce February 2, 2018, release date for their new CD, We Rise Up, on Line Crossing Records. Originally from Georgia and Pennsylvania and now based in Nashville, Raven and Red are comprised of Brittany Lynn Jones – lead and harmony vocals, 5-string violin, tenor guitar, mandolin and banjolin; and brothers Mitchell Lane – lead & harmony vocals, 6 and 12-string guitars; and Cole King – harmony vocals, mandolin. Special guests on We Rise Up are Paul Leech on electric, upright bass and cello; and Justin Collins on drums and percussion.

Raven and Red will celebrate the release of the new CD with a series of special shows, including Saturday, February 10, 2018, for Eddie Owen Presents at the Red Clay Music Foundry in Duluth, Georgia (just outside of Atlanta). Music starts at 8 pm.(http://eddieowenpresents.com/). The trio will also perform several shows at the upcoming Folk Alliance International Conference in Kansas City, Missouri, February 14-18.

Listen to “Living and Loving You” here: http://ravenandred.com/living-and-loving-you/

“This is the first song we finished writing together and it describes the feeling of coming to a crossroads in your life and having to make difficult decisions when you don’t feel ready,” says Mitchell Lane. “Do you make a commitment to a loved one and create a life with him or her, or do you pursue your dreams–even if it means having to leave that person behind and risk it all?”

Raven and Red combine elements from all of their different musical influences into their songwriting and the songs featured on We Rise Up. “We find it difficult to really narrow down our style into one particular genre,” observes Mitchell. “We have so many influences, from John Denver and Jim Croce to Tim O’Brien to classic rock and back to Bach. We are still learning from each other every day and developing our signature sound. This album is one milestone in our musical journey.”

“So many of our musical influences seemed to flow into these songs naturally,” explains Brittany. “We listen to so many different genres, and I think that can be heard within our music. Each song adds its own distinct sound and emotion to this album.” Although We Rise Up blends Americana, folk, classic country, bluegrass, Celtic and bits of classic rock and pop, Raven and Red has created a sound of their own. “We love songs that tell true stories. Many of the songs on this album are inspired by true stories, but even the fictional stories reveal human truths that are familiar to everyone,” adds Brittany.

This is the trio’s first album of original music. “When we began writing, we had no idea how our music was going to progress and develop over time,” admits Mitchell. “At the end of 2014, we moved to Nashville and slowly began writing these songs between 2015 and 2017 amidst a busy touring schedule. The writing process came together quicker than we thought it would, and we discovered that we really enjoy writing and the feeling of completing songs.”

Mitchell’s lead vocals are exceptionally clear and strong, and with Cole’s harmony as an anchor, Brittany’s rich, mellow voice is the perfect complement to the pure singing heard throughout the album.

Raven and Red began as a duo with Brittany and Mitchell. Cole King, Mitchell’s youngest brother and currently an 11th-grade student at Woodward Academy in Atlanta, soon joined the two on mandolin and helped to fill out the group’s three-part harmonies. Cole was only 13 years old when he began performing with the band. “I was so excited to be a part of Raven and Red,” enthuses Cole.  “Brittany and Mitchell were very influential for me musically, and I was ready for anything.”

“As a group, we are very focused on our vocals,” says Brittany.” We enjoy arranging harmonies and writing melodies that capture the lyrics in our songs.” “Cole’s voice creates a smooth blend, accentuating the harmonies, and his learning to play violin in school translated seamlessly to the mandolin,” adds Mitchell.

After already having many musical accomplishments individually, Brittany Jones and Mitchell Lane met while attending the University of North Carolina School of the Arts in Winston-Salem.  Not limited to one style of music, they discovered their shared interest in many different genres alongside classical music and have been collaborating musically since they first met. “Just like in classical music, there is an important historical component to folk music and we were immediately drawn to it,” Mitchell recalls. “After graduating college in 2013, forming Raven and Red was our natural calling as performing musicians.”

On the CD, Brittany uses the fiddle and tenor guitar to weave in and out of the musical phrases, smoothly connecting the songs’ transitions together. Her fiddle playing gives each song what it needs by varying between bold, innovative solo lines and sensitive, lyrical melodies. “The fiddle is an important part of our sound, and it really sets the tone for the band. I think the mandolin helps to add that folk element people want to hear, and nothing sounds quite like it,” Cole states.

We Rise Up represents a collage of musical ideas and memories that the trio shares from traveling and performing together. “After writing the title track, ‘We Rise Up,’ we realized that many of the songs share common themes, including love, heartbreak, admiration, and self-reflection. ‘We Rise Up’ completed the album as the final song. We wanted it to have a positive message that anyone could relate to about overcoming obstacles and struggles and persevering–something everyone has to go through in their lives. We also wanted it to sound catchy and fun at the same time with lots of harmonies and instrumental solos throughout the song,” Mitchell states. “Another theme in the lyrics of this song is ‘the road we all must travel,’ which describes how every person shares the experience of ups and downs while going through life bound to time. Time is always moving forward, and we are moving with it. We hope that our songs will reach fellow music-lovers and those interested in exploring the human condition,” Brittany says.

In the four short years of performing full-time, Raven and Red have opened shows for Grammy Award-nominees Connie Smith and Dailey & Vincent, multi-award-winning bluegrass groups Russell Moore & IIIrd Tyme Out and The Claire Lynch Band, and Irish pop/Celtic rock band, Screaming Orphans. The group has joined the lineup for the 2018 Dailey & Vincent LandFest in the Mountains, held at the Georgia Mountain Fairgrounds in Hiawassee, GA.