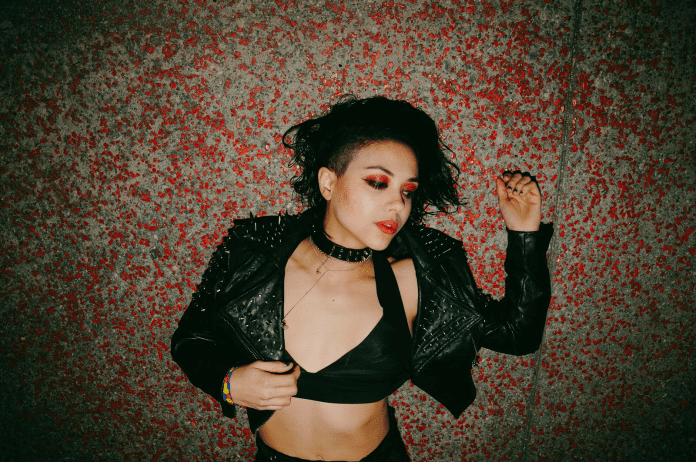 “With her first single in [3 years], a grim and greasy mid-tempo called “Dope Sick”… Melo claws her way out of the muck to reclaim her life”

(SAN FRANCISCO, CA) West Coast phenom Alexa Melo is excited to announce the release of the music video for “DOPE SICK”, her first original single in nearly three years, exclusively via PopDust. After years of keeping fans waiting due to major vocal cord surgery, the 23-year-old alt-pop artist is back with an intense visual, and a sophomore EP entitled MUTE on the way (releasing October 12th).

In the new Mad Max-inspired video, Alexa takes the viewer on a sensory rollercoaster ride. Smooth drone shots above her classic Ford Mustang segue to unsettling, shaky, straight-jacket scenes, with flashbacks to ‘relationships past’ set in between.

“Dope Sick” was mainly inspired by a breakup, but its title isn’t a flippantly-used metaphor. “I grew up around substance abuse. And during a recent breakup, I noticed similarities in the addictive, masochistic behavior. ‘Dope Sick’ is about almost dreading the day the withdrawals end, because the healing officially signifies you’re truly alone again.“

A signification of solitude, possibly, but in the literal sense for Alexa, a return to strength. “Dope Sick” is the perfect introduction to what will likely be one of the most intense and inspiring EPs to be released in 2018.

Alexa Melo has built up a flurry of attention since the release of her 2015 debut LP. The swelling popularity of her unorthodox cover songs have garnered over 2 million views and 36K followers on Youtube alone, as well as airplay on tastemaker radio outlets including KCRW Los Angeles. Alexa’s fans have been eagerly waiting for new original music, and in the first hours upon the release, “DOPE SICK” has amassed thousands of views, with hundreds of likes and comments.

Melo first began her rise to prominence with the release of a self-titled album in Summer of 2015. With the blogosphere ablaze, radio promoters taking notice, and shows across the West Coast in full swing, BuzzBands LA raved, “Melo’s songs recall some of the strongest voices of the 1990s”. But just as things were ramping up, emergency surgery on her vocal chords grinded the momentum to an untimely halt. “It got to the point where, if I didn’t get a vocal cord cyst removed, there would be irreversible damage”, Alexa would later reveal. Despite the setback, Melo has since been able to built up an even wider fan base and is now sharing the journey of the last three years with the release of “DOPE SICK” and her upcoming EP MUTE (out on October 12th).