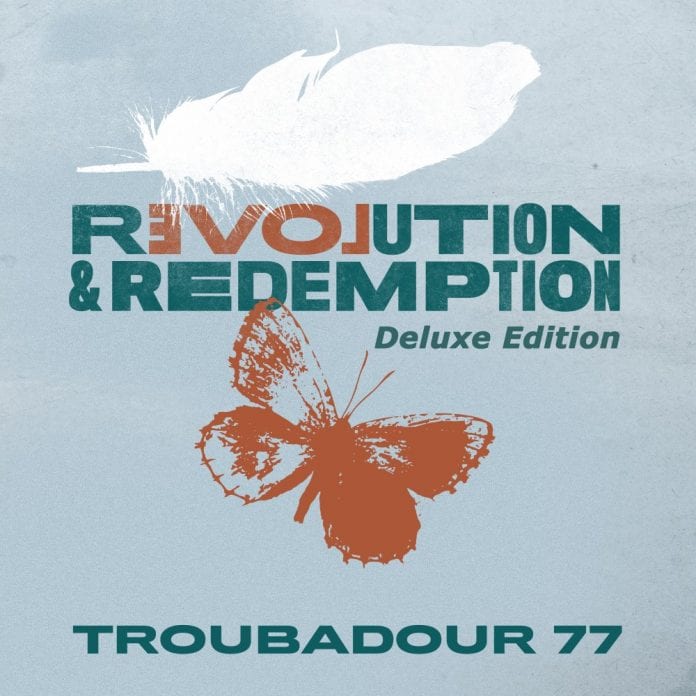 NASHVILLE, TENN. – July 29, 2020 – Revolution and redemption has come, and not a moment too soon. Americana duo Troubadour 77, comprised of Nashville hit-makers and husband/wife team Monty Powell and Anna Wilson, are releasing a Deluxe version of their sophomore album Revolution & Redemption, featuring two new songs that are part of what the duo is calling THE LOVE FORWARD PROJECT, and are aptly titled “Are You Ready for Love” and “More Love”. “These songs speak specifically to the season the world finds itself in,” Wilson states, “They were inspired by the experiences we as a society are having amid the backdrop of this pandemic and the equality conversation that has been reignited. We felt compelled to add them to the album because their message serves as a perfect complement to the spirit of Revolution & Redemption.”

Wilson penned, and Powell produced, the two important songs that continue the story being told on their current album, which is already a collection of songs that touch on life, love, hope, death, dreams, change and acceptance, all themes that seem to be very relevant in these times. “We need more love. We want more truth. I would like to think that is something we can all agree on,” Powell states, “At the end of the day, I believe that most people want the same things: peace, hope and love. That is what these songs are all about.”  Conversely, the album’s logo art alludes to the word “LOVE” spelled backwards in the word “rEVOLution”. Now, with this Deluxe release, they are calling for a message of love forward with these two new singles. The album is currently available to listen here: https://smarturl.it/RevolutionRedemption

“Are You Ready for Love” is a call to action that is meant both literally and rhetorically,” says Wilson. “It poses the question to the sentiment, ‘Enough is enough,’ words we often hear penetrating the conversation today. I find that phrase being used too often these days and referring to more than one issue; from gun violence, to immigration, black lives matter, the green movement, the virus and so much more. I hope we won’t ever say ‘enough is enough’ when it comes to love. So asking the question ‘Are You Ready for Love’ is a starting place and More Love is the song that I think starts to provide an answer.”