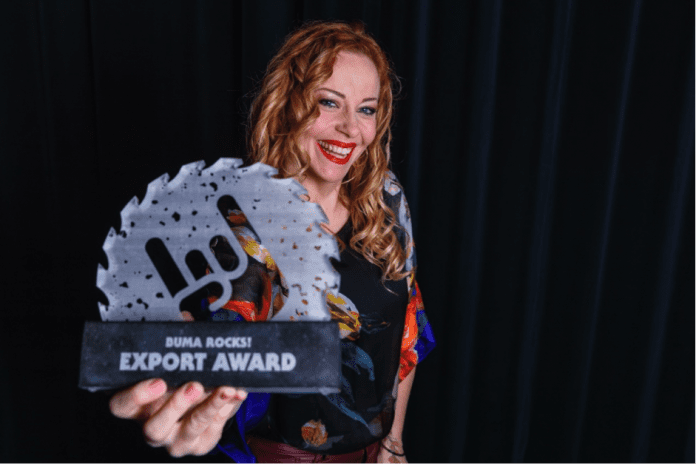 After 25 years on the international stages, Anneke van Giersbergen is more active than she has ever been. That’s why her efforts have been recognised with the Buma ROCKS! Export Award, which she will receive on June 1st during metal festival FortaRock in Nijmegen, the Netherlands.

Buma Cultuur supports and promotes Dutch music copyright in both The Netherlands and key export markets for Dutch music. Each year Buma Cultuur presents a number of special awards to Dutch artists for their achievements. This year, the Buma ROCKS! Export Award for the most successful Dutch artist abroad in heavy music will be awarded to Anneke van Giersbergen.

Frank Helmink, director of Buma Cultuur: “Anneke is a household name in the rock and metal world. With The Gathering she connected metal with melodies from progressive rock. She was one of the founders of the female-fronted metal movement, which is still emulated worldwide to this day. As a solo artist and with her guest appearances she has managed to attract a loyal audience, from the heart of Brabant, the province where she was born, to well into North and South America. Add to that the fact that her voice and performance are instantly recognizable across the globe, and it’s abundantly clear that the Buma ROCKS! Export Award belongs to her.”
Anneke: “I am not particularly fond of looking back, but I do think a successful 25-year career is worth celebrating. I have always been driven by my love for singing and music, I don’t care that much about recognition. That is why I was very surprised and honored to receive this award.”

FortaRock takes place in Goffertpark, Nijmegen the Netherlands on June 1st and 2nd. Anyone with a weekend ticket or a ticket for Saturday June 1st can attend the presentation of the Buma ROCKS! Export Award to Van Giersbergen.

On November 19th, 1994 Anneke performed for the first time on stage with The Gathering. It marked the beginning of her professional career. On November 16th and 17th, 2019 Anneke will celebrate this anniversary with two exclusive shows at Effenaar, Eindhoven the Netherlands. She will perform a career-spanning setlist together with musicians from her solo band and VUUR. She will also be joined on stage by Daniel Cavanagh (Anathema), as well as Kamerata Zuid string orchestra.

The show on November 16th has already sold out, there are still some tickets available for November 17th.
In late 2018, Anneke released ‘Symphonized’, an 11-track live album record at two career-spanning concerts alongside Residentie Orkest The Hague, which saw solo tracks as well as compositions from VUUR, The Gentle Storm and The Gathering reimagined with the orchestra. Listen to the orchestral version of VUUR’s ‘Your Glorious Light Will Shine – Helsinki’ here: https://youtu.be/LzWAkj0uwfs