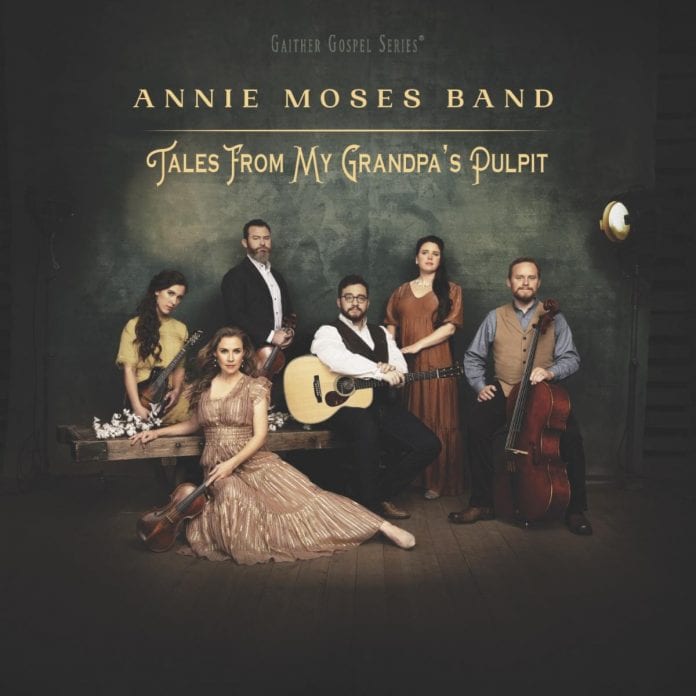 The Annie Moses Band – the Nashville-raised and New York-trained ensemble – is back with a new album and DVD special. Tales From My Grandpa’s Pulpit finds the multi-instrumentalist sibling string band visiting their rich heritage, sharing stories of their family, their faith, and the musical journey that has made them one of the most beloved bands to grace a wide array of stages from the Grand Ole Opry to Carnegie Hall.

Set for release on April 16, by Gaither Music Group, Tales From My Grandpa’s Pulpit continues the Annie Moses Band’s tradition of “upscale Americana,” created by building lush soundscapes on a solid foundation of traditional roots music. Known for their storytelling through song and masterful, complex arrangements, the family has put together a recording that honors their history and values. A combination of new songs, hymns and traditional country anthems, the songs on Tales From My Grandpa’s Pulpit herald back to their grandfather’s influence as both a preacher and a deputy sheriff – an influence that has garnered the Annie Moses Band the title “first family of American music.”

“Our roots go back four generations to cotton pickers in the Great Depression,” states Annie Dupre, the group’s lead. “One of the great figures in our family history was our grandpa, who was the preacher and the deputy sheriff in a small mountain community in Oklahoma. This album is our ode to him. Our grandpa had a saying, ‘It ain’t right to do nothin’ when somethin’ oughta be done.’ He believed in redemption and worked with forgotten men and women over four generations. That’s the thread of Grandpa’s Pulpit—sin, redemption and resting in the arms of God.”

Showcasing their blend of classicism and folk-rock authenticity, the new studio recording and companion DVD is hosted by GRAMMY ®-winning singer/songwriter Rory Feek, who sat down with the family to talk about their faith and heritage. The new recordings showcase the band’s unique ability to combine barn-burner fiddling with world-class arranging and their creativity to infuse iconic songs from the heartland canon with classical finesse. Folk-rock originals tell a story of faith salted by grit. The recording will be featured as a TV special this spring and summer on networks ranging from TBN, RFD-TV, PBS and Circle to a variety of Christian TV channels throughout the United States and Canada.

The title track showcases the band’s deft skill, building tension as it draws listeners into a story of hardship and steely-spined faith and rises into an explosive and dramatic chorus. Each song is a journey through life, love and faith, including the original “Old Hat,” which delves into a lifetime of dreams and memories relived through a battered, old cowboy hat. All of the siblings are stellar vocalists as well as instrumentalists, with the rollicking “Ghost Riders in the Sky” giving each band member the opportunity to shine and “Tumbleweed” showcasing Gretchen Wolaver as a deft mandolinist. With “Everlasting Arms,” the Annie Moses Band creates a medley of time-honored hymns skillfully woven into a musical tapestry of pristine vocals and stunning instrumental accompaniment.

Indeed, the family’s “cotton patch to concert hall” journey is a story in and of itself. The siblings grew up in Nashville, the children of award-winning songwriters Bill and Robin Wolaver, who are featured performers and storytellers in the concert special. Jeremiah Wolaver, Gretchen Wolaver, Alex Wolaver, Annie (Wolaver) Dupre, Camille (Wolaver) DaSilva and Benjamin Wolaver hail from a family with deep musical roots. Homeschooled before attending the famed Juilliard School in New York City, the siblings played classical music before setting out on the journey of making their own music. It was a freeing move and over 15 years later, the Annie Moses Band has not looked back.

In that time, they have recorded over a dozen albums, performed on some of America’s most esteemed stages, toured Europe and Asia and recorded Emmy-nominated PBS specials. The family also founded a non-profit, the Annie Moses Foundation, to nurture the artistic development of families.

Tales From My Grandpa’s Pulpit is the next chapter in the family’s musical story. Find the CD and DVD at www.anniemosesband.com or www.gaither.com, or find the recording on all popular music streaming platforms.

Watch the video teaser from the new DVD recording below:

3.  Great Is Thy Faithfulness

5.  The Light of the Mountain

6.  Ghost Riders in the Sky

12.  Heaven’s a Heartbeat Away