Home News Music News Back By Popular Demand The Fader Announces Second Iteration 0f the Save... 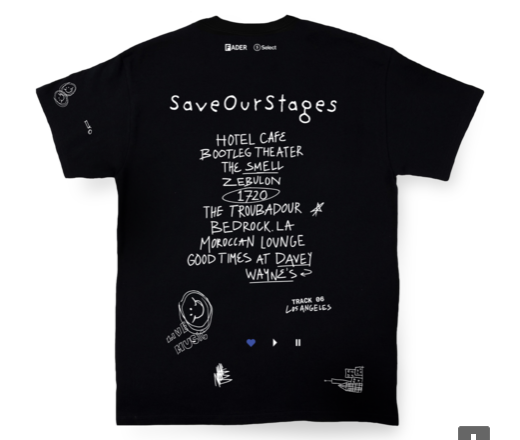 (New York, New York – November 24, 2020) –  Earlier this year, in response to COVID-19 crisis and its detrimental effect on the live music industry, The FADER partnered with This T-Shirt – a relief platform founded by Dylan Hattem and Cassandra Aaron of DS Projects –  to launch the Save Our Stages Collection, a charitable merch initiative benefitting independent venues in New York City.

The New York City iteration of the Save Our Stages Collection launched with the I F*CKING LOVE LIVE MUSIC T-SHIRT – NY, an illustrated t-shirt highlighting nine different venues across Manhattan & Brooklyn. The t-shirt was received with wide acclaim, receiving coverage across the industry and mention in New York Magazine as a collaboration to “That’ll Almost Definitely Sell Out.” It did sell out, raising over $40,000.00 for the cause.

Now, thanks to an overwhelming response from the music community and a generous donation from America’s #1 Cannabis Oil Brand, Select  The FADER has announced a second iteration of the Save Our Stages collection benefitting independent venues in Los Angeles.

In homage to the classic tour t-shirt, The FADER & This T-Shirt will once again build on the National Independent Venue Association’s (NIVA) #SaveOurStages campaign, spotlighting independent venues across Los Angeles and the cultural impact they hold within their communities. 90% of NIVA members have reported that if there is no meaningful federal emergency relief, they will be forced to shutter forever. The collection taps into the community’s love for live music to communicate that if we don’t step in, these venues will not survive.

As of today, November 24th, the Los Angeles iteration of the Save Our Stages Collection will be available for purchase at https://thist-shirt.com  and through Instagram Shopping at @buythistshirt for a limited time. Proceeds from all t-shirt sales will go directly to the venues listed on each shirt and to NIVA’s Emergency Relief Fund. NIVA’s Emergency Relief Fund was created to support America’s most vulnerable venues and is intended to provide short-term relief for independent music venue owners and promoters on the precipice of eviction or permanently shuttering due to the COVID-19 shutdown. The fund is intended to work hand-in-hand with federal and local programs, assisting with the most immediate needs facing the country’s independent venues and promoters and making it more likely that they will be able to reopen, fully, when it’s safe.

Participating venues include a mix of independent venues across Los Angeles. A full list of venues from the Los Angeles collection is provided below.

To support venues and cities not represented in the first collection, folks can visit www.saveourstages.com for more information.

The Save Our Stages Collection is another initiative in a long list of charitable acts The FADER has been championing in recent history. Earlier this year, due to the cancellation of Austin’s famed South by Southwest Festival, The FADER took its typically invite-only FADER FORT to a digital platform, which featured over 150 exclusive presentations and musical performances by both emerging and acclaimed artists in an effort to help raise money for those hardest hit by the COVID-19 pandemic in the music industry. The event, dubbed Digital FORT, was thrown a second time on July 25th, with over 40 artists participating from around the globe.  To date, The FADER’s charitable initiatives have yielded over $25,000 in contributions.