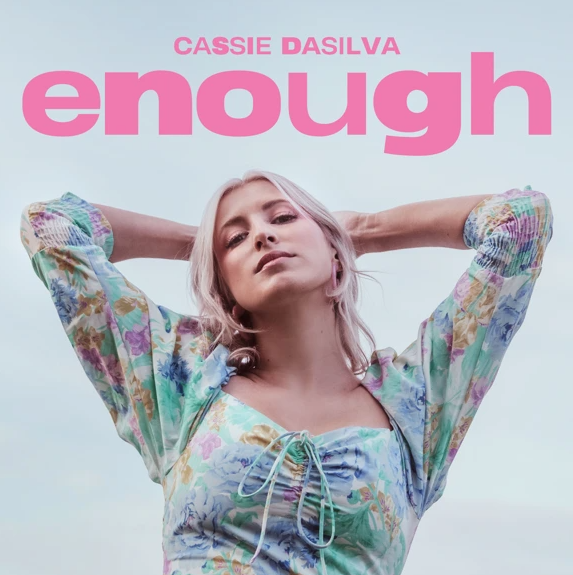 Toronto, ON – Canadian pop singer/songwriter Cassie Dasilva is set to release her debut EP Enough independently on July 23 via all streaming platforms. The 6-track EP is a collection of songs that focuses on relationships and explores both dealing with a breakup and finding love.

“Enough is a collection of songs that focuses on relationships and explores both dealing with a breakup and being in love. I understand that, thematically, the two don’t go together, but I’ve found in my experience that love and heartbreak aren’t sequential. They’re not always independent of one another, and it’s entirely possible to experience feelings of heartbreak, anger and frustration, while completely falling in love with someone new. I know, because that’s my story,” said Dasilva.

The first single released off the EP; “Unsolicited Contact” went viral on TikTok, with a clip of the ‘Scream Queens’-inspired music video earning over one million views on the platform. Dasilva has seen continued growth on social media and on streaming platforms since releasing two more singles from her EP, “We Might Break Up” and “I Don’t Trust Anyone Anymore” with their respective 100% female-made pastel dreamland and movement choreo themed videos.

In addition, the EP will include three new tracks “I Don’t Hang out with My Exes”, “Darkside” and “Enough”, each inspired by Dasilva’s relationships, past and present. “Darkside” gives insight into the end of a past relationship, and is a reflection of being able to come out of that darkness into a place of love and growth. The title track, “Enough” was written about finding love and contentment with her current long-term boyfriend, and acknowledging that true love, above all else, is enough.

Dasilva burst onto the Canadian pop scene in 2018 with a comparatively glossier sound, releasing “Welcome to My Castle” and “Rough Cut” on her first major recording contract under Universal Music Canada after an impromptu jam night performance caught the attention of the label’s President & CEO. Both songs were produced by JUNO Award- winner Mike Wise (bülow, Ralph). “Welcome to My Castle” peaked at #8 on Spotify’s Canada Viral 50 chart, and “Rough Cut” was featured on the infamous PerezHilton.com.

Dasilva ended 2018 with the independent release of a holiday original, “Season’s Greetings”. Featured at the top of Spotify’s “Christmas in Canada” playlist and in the film “The Christmas Wedding Planner” (which trended worldwide on Netflix). She went on to release “Still in Love” (produced by Mike Wise) independently in 2019, which outperformed both of her label releases on streaming platforms in only two weeks.

For this 100% female-produced project, Dasilva has crafted a collection of songs that are unapologetically vulnerable and honest. Calling out our collective exes amidst infectious melodies and edgy production, she not only has a lot to say, but has figured out exactly how she wants to say it… and she’s ready to be heard.