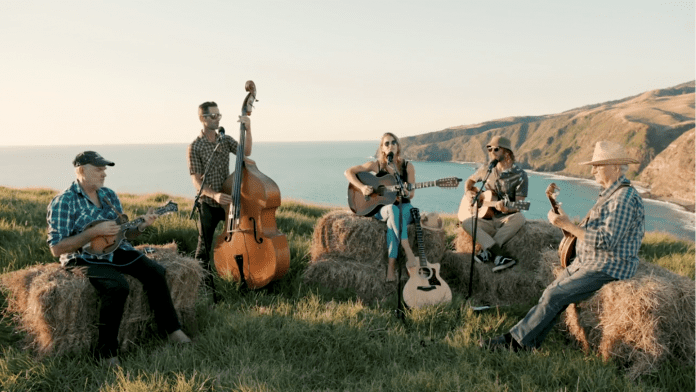 Nashville, TN – Friday July 2, 2021 — Coming off of the release of her highly-praised, sassy new single “Come In (But Don’t Make Yourself Comfortable),” indie country/pop singer-songwriter Caroline Jones today released “The Raglan Sessions,” an unplugged performance series alongside New Zealand bluegrass group The Trenwiths. Set atop a breathtaking cliffside in Raglan, New Zealand, the stripped-down session features a handful of Caroline’s original songs such as “What A View” and “Rise,” as well as covers of Mandolin Orange’s “Wildfire,” Emmylou Harris’ “If I Needed You,” “Wayfaring Stranger,” and more. To view these performances, as well as commentary on how the recording came about, click HERE.

“I was fortunate enough to spend most of the past year in New Zealand, where I met The Trenwiths, a bluegrass band whose founding members have been playing together since the 1960’s,” said Jones. “Their family band now consists of three generations of musicians and singers. They are some of the most good-humored, good-natured, authentic people I’ve ever had the pleasure of being around. Before I left New Zealand to come back to America, I brought a couple of cameras along to capture one of our jams, which we edited down into this video called ‘The Raglan Sessions’.”

Having relocated to New Zealand towards the beginning of the pandemic, Jones set out to find inspiration and work on her sophomore studio album. Always open to trying different styles of music, and as COVID cases eased, she researched local musicians and was introduced to The Trenwiths, a bluegrass harmony band made up of two brothers and their father. This is the second time the two have worked together, as their first collaboration was in November 2020 for a two-track holiday collection, Silver Bells, featuring upbeat bluegrass renditions of holiday classics “Silver Bells” and “Winter Wonderland.” Watch their studio session HERE.

Jones has been busy creating new music over the past year. In May, the multi-instrumentalist released her current single “Come In (But Don’t Make Yourself Comfortable)” from her forthcoming sophomore album (expected late 2021), as well as the accompanying, cinematic official video filmed at a ‘western-style’ bar in New Zealand. Co-written and co-produced by Jones, the single received high praises from critics upon release:

To find out what’s next for the talented singer/songwriter, visit: https://carolinejones.com/