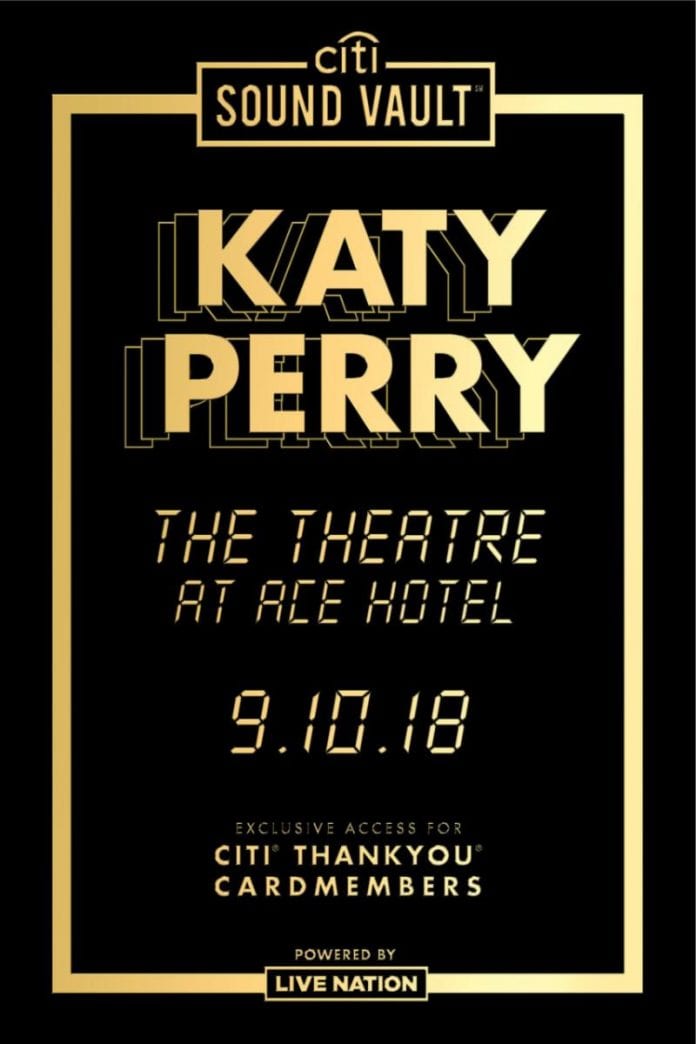 Los Angeles, August 21, 2018 – Global pop superstar Katy Perry will be performing an intimate show exclusively for Citi ThankYou cardmembers on Monday, September 10 at The Theatre at Ace Hotel in LA, as part of the highly coveted Citi Sound Vault series.

Created in partnership with Live Nation, Citi Sound Vault is a curated platform, exclusively for Citi cardmembers to access unprecedented music experiences across the U.S. Sting, Eddie Vedder, Eminem, Childish Gambino, Dave Matthews, The Chainsmokers, Mumford & Sons, Luke Bryan, Beck, and Metallica are just some of the artists who have taken part in bringing this once-in-a-lifetime access to fans.

Katy made her Capitol Records debut with 2008’s One of the Boys after signing to the label in 2007. She cemented her status as a global superstar with the follow-up album, Teenage Dream (2010), which made her the only female artist (tied with Michael Jackson) to have five No. 1 singles from one album on the Billboard Hot 100 chart (“California Gurls,” “Teenage Dream,” “Firework,” “E.T.” and “Last Friday Night”). PRISM, her 2013 album, debuted at No. 1 on iTunes in 100 countries and has sold more than 12.5 million adjusted albums worldwide. With the singles “Roar,” “Firework,” and “Dark Horse” each surpassing the 10 million thresholds including song sales and streams, Katy is the only artist to earn three RIAA Digital Single Diamond Awards. In her 10 years with Capitol, she has racked up a cumulative 18+ billion streams alongside worldwide sales of more than 40+ million adjusted albums and 125+ million tracks. Katy’s 2015 Super Bowl performance is the highest-rated in the event’s history. She is the most- followed person globally on Twitter, and the first to surpass 100 million followers.

Katy Perry’s fourth studio album, WITNESS, debuted in June at No. 1 on the Billboard Top 200, and No. 1 on iTunes in 46 countries. The lead single, “Chained To The Rhythm,” set the record for the biggest first day Spotify streams by a female artist, and is now certified Platinum, with over 1 billion streams worldwide. Views on the accompanying video made her the most-viewed female artist on VEVO. Follow-up singles, “Bon Appetit” (whose music video was Katy’s fastest viewed music video of all time, with 14.2 million views in the first 24 hours) is certified Gold, and “Swish Swish” is now certified Platinum.

Citi and Live Nation – the world’s largest live entertainment company – have a longstanding relationship that is focused on providing fans with more access to their favorite artists and providing next-gen experiences. The duo are trailblazers when it comes to delivering unrivaled experiences for fans, offering thousands of events each year to Citi cardmembers