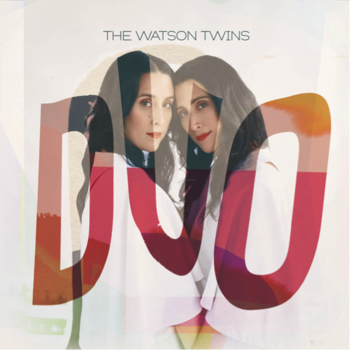 The Watson Twins’ anticipated new album, DUO, will be self-released with distribution from The Orchard/Think Indie on October 12 and is now available for pre-order. In advance of the release, the album’s lead track, “Hustle and Shake,” is premiering at Brooklyn Vegan, who praises, “….a lovely sounding dose of twangy folk that sees the sisters’ voices sounding as wonderful together as ever.” Listen/share HERE.

DUO is the sixth studio album from The Watson Twins—comprised of identical twin sisters Chandra and Leigh Watson—and the first with the pair co-writing all the material and singing all parts together. Produced by their longtime collaborator Russ Pollard (Everest, Sebadoh), the album was recorded in Nashville and includes eight original songs. In addition to Chandra, Leigh, and Pollard, the album features guest musicians Carl Broemel and Bo Koster (My Morning Jacket), Vanessa Carlton, Mickey Raphael and The Cactus Blossoms.

Of the album, Leigh comments, “The backdrop of Nashville inspired a new direction for us. We’d always written songs separately but we wanted to focus on our strength as a duo. The last few years in the studio and on the road allowed us to explore our sound while singing with other artists. Now felt like the right time for us to make a record that reflected the experiences we’ve gathered along the way.”

In celebration of the release, the pair will tour throughout 2018 including a series of dates supporting Pokey LaFarge with stops in Atlanta, Washington, D.C., Boston and New York among others. Additionally, they will make their AmericanaFest debut this September and will perform a special record release show at Nashville’s The Basement on October 13. See below for complete tour details.

Over the course of their career, the Louisville, Kentucky natives have released five studio albums to critical acclaim. Of the sisters, Los Angeles Times declares, “As twins, they can shape-shift even more effectively than most polyphonic siblings; the aura they project, of one voice split in two, enhances their ability to cast a spell,” while Paste praises, “The twin sisters have a sense of harmony that has gone unmatched.” In addition to touring in support of their own releases, the sisters have also performed as backup vocalists for some of music’s most notable acts including Kings of Leon, Harry Connick Jr., CeeLo Green, Foster The People, Jenny Lewis, John Paul White, My Morning Jacket, Shooter Jennings, Willie Nelson and many more.