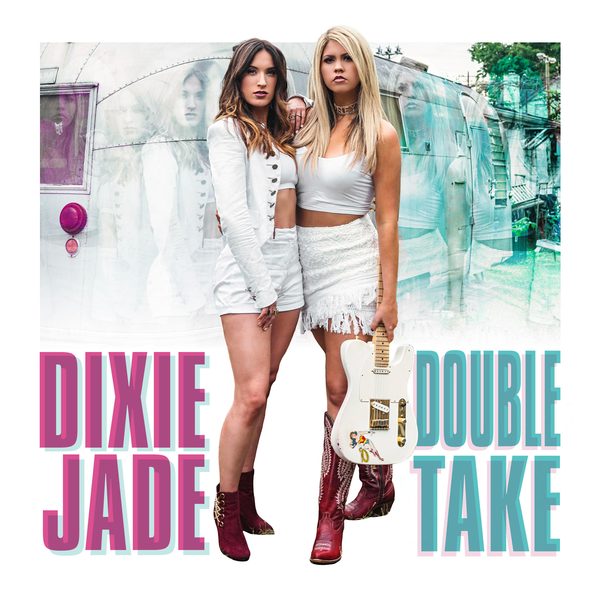 Country duo Dixie Jade is made up of Andrea on lead vocals and piano and Dominique on vocals and lead guitar. Originally from California, the pair moved to Nashville separately to pursue their music career in the Country Music Capital of the World. After reconnecting in Nashville, the duo tells us “we got together to write a song and loved it so much that the rest is history.”

Dixie Jade’s music is a “blend of their love for classic country and vintage soul with in-your-face pop radio production.” Andrea and Dominique have written hundreds of songs and toured across the U.S.

Described as ‘fierce’ and ‘radiant,’ the duo exudes energy and talent onstage having opened for Thompson Square, Walker Hayes, and Love and Theft. As Nashville residents, they have performed at Bluebird Café, Whiskey Jam, and BMI’s Young Guns and 8 Off 8th, as well as the Spotlight Stage at CMA Fest and the BMI Key West Songwriters Festival.

Today, Dixie Jade premiere’s Double Take‘s double singles “Rocking Away” and “Don’t Tell (Shh)” which will be released on Friday, March 1, 2019.  Double Take follows the November 2017 release of their first single “I Can’t Turn You Off,” and their most recent single “Temporary Tattoo” which has had over 130,000 plays on Spotify since its release in June 2018.

Dixie Jade fills us in on Double Take, how the band was formed, and what’s next.

Double Take featuring two new singles “Rocking Away” and “Don’t Tell (Shh)” are releasing on Friday, March 1. Tell us about the inspiration behind these two songs.

As so many of our songs do, this song came about as we were driving back from a gig in Alabama. We were listening to country radio and talking about how we missed songs about love that lasted a lifetime. I think it was Andrea who said “Rocking Away” and then proceeded to explain that it was about a couple who met rocking out at a concert, fast forward to them getting married and rocking a baby to sleep, and then rocking in their rocking chairs in their old age. We were so inspired that the song just fell out.

One of our friends at the time started dating one of her coworkers. She was keeping it a secret because they worked together and weren’t sure if an office romance would go over well. She was really excited and really cute about it, and we had experienced in our own lives different people getting in our heads about relationships because of idle gossip or opinions. That brand new magical period at the beginning of a relationship is so unique and special, we really wanted to capture that in the song.

How did you two come together to form Dixie Jade?

We went to the University of Southern California together, where Andrea was an opera major and Dominique studied classical guitar and songwriting. We were only acquaintances, but after both moving to Nashville separately and a chance run-in at the Bluebird Cafe, we got together to write a song and loved it so much that the rest is history.

As California girls, one would not expect that country would be your first musical inspiration, how were you inspired to go country and who are some of your musical influences?

Andrea grew up listening to country music with her dad in the car on the California radio station KZLA on the way to school when she was growing up. They had a mutual love of all the music going on at the time, including Wynonna Judd, Martina McBride, and Reba McEntire.

Dominique fell in love with the guitar riffs in country music, everything from Shania Twain to Carrie Underwood to Johnny Cash. She also loved the storytelling in the music, and she and Andrea still love listening to 90s/early 2000s country in the car together and singing along to all the songs.

How has moving to Nashville impacted your career in country music?

We both wanted to move here because of the songs we grew up loving on country radio, and it’s been a dream come true to get to write with some of those songwriters. We love the songwriter community here and how supportive everyone is. A lot of the opportunities we’ve gotten have been from our friends which is amazing because we’re all bonded from our love of country music.

We’re excited about your two new singles. Shall we expect an album in the near future?

We’re currently in the studio recording some new material and planning on releasing an EP in Spring 2019 that we can’t wait to share with y’all!

Also, we’re really excited about the new singles we have coming out March 1st! We’re also touring a lot this spring/summer so stay in touch with us by signing up for our mailing list on our website or one of our socials.