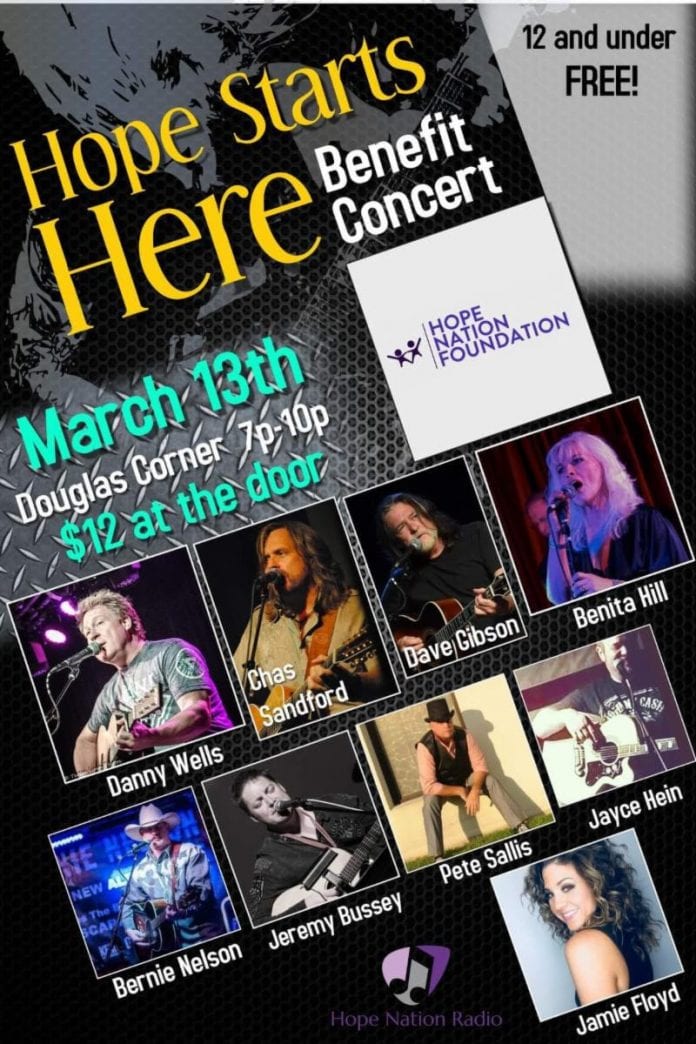 This benefit concert will spread the message of hope and create an awareness of childhood cancer. It will take place Wednesday, March 13that Douglas Corner Cafe and money raised will go directly to the Hope Nation Foundation, a financial support system to help families who have children with cancer.

“Each year there is an estimated 15,780 children between the ages of birth and 19 years old who are diagnosed with cancer,” says Nile Peaytt, Hope Nation Radio founder. “Nothing is more rewarding than everyone coming together, making a difference and giving these children a fighting chance. I hope you will join us for a very special night!”

BENITA HILL: This successful writer has been featured on TV, film, and stage. She’s collaborated with jazz legends like Issac Hayes and Kirk Whalum. She’s been a backup singer with the Allman Brothers, Conway Twitty, and JJ Cale. She is best known for co-writing Garth Brooks hit Two Pina Coladas.

CHAS SANDFORD: This Nashville musician and hit songwriter is known for penning hits for John Waite (Missing You), Stevie Nicks (Talk To Me), and Chicago (What Kind of Man Would I Be). He’s had songs recorded by legendary names including Allison Krauss, Brooks & Dunn, Rod Stewart, Tina Turner, etc. He has also produced a wide range of artists including Chicago, Rod Stewart, Roger Daltrey, Stevie Nicks, etc.

DANNY WELLS: This BMI award-winning writer has dozens of hits under his belt including the No. 1 smash for George Strait (Check Yes Or No) as well as Rascal Flatts (Everyday Love, These Days, While You Loved Me) and Craig Morgan (Little Bit Of Life). He has received million-air certificates for three of his hits, one of which was Collin Raye’s hit (Couldn’t Last a Moment). He also has had cuts with Bill Anderson, Joe Diffie, Jo Dee Messina, John Michael Montgomery, Sara Evans, Tracy Byrd, and Wade Hayes.

DAVE GIBSON: In addition to writing hits Jukebox On My Mind for Alabama, and If It Don’t Come Easy for Tanya Tucker that both hit No. 1 of the US Billboard Hot Country charts, Dave has an extensive list of cuts including Montgomery Gentry (Lonely And Gone), Joe Diffie (Ships That Don’t Come In), and Confederate Railroad (Queen of Memphis and Daddy Never Was The Cadillac Kind). He also has hit with Conway Twitty, Pam Tillis, Steve Wariner, and was half of the Gibson Miller Band.

JAMIE FLOYD: This Grammy-nominated singer/songwriter had cuts with Ashley Monroe, Brian McKnight, Hayden Panettiere, Kellie Pickler, Lucie Silvas, Miranda Lambert, Ronnie Dunn, among others. Jamie was a part of the duo Stranger Friends who not only appeared in Burt Reynolds final film, but they also wrote the soundtrack. She’s had songs on ABC, Lifetime, Hallmark and most recently was on the USA Network show “Real Country.”

PETE SALLIS: This chart-topping songwriter had cuts that cover a wide range of genres from the pop American Idol Winner Phillip Phillips (So Easy), the blues of 3x Gray Winner Keb Mo, the country of Maddie & Tae (Shut Up And Fish), Bucky Covington, George Canyon and more.

About Hope Nation Radio: Formed in 2013 by Nile “Big Daddy” Peaytt and Thomas Hammonds, this station plays a variety of country music, pop, rock, contemporary, Christian and gospel from signed and independent artists. This is a station anyone can listen to, including the children in the hospital; whether it be for a lengthy stay or to help pass the time while getting treatments. With several different radio shows on their station including Big Daddy Live, Saturday Night Spotlight, 90’s Country Flashback, Sunday Sessions, and the newest show Music City Rocks, this station has something for everyone. What was inspired by a talk “Big Daddy” had with 11-year-old Savannah Swandal at her bedside just weeks before passing away, has now evolved into spreading hope, raising awareness and inspiring others to join the fight. “We wanted to connect with these kids from all over the country, bring smiles and inspire people to get involved in their community,” says ‘Big Daddy.’ They feature a “Kid of the Month” where they encourage folks to send get well cards for that child that is going through of struggles and hospital visits.

Hope Nation Radio goes above and beyond to care for those in need and bring awareness to childhood cancer, its reach continues to grow and strengthen year by year. They host multiple benefit shows in Nashville, coordinate gatherings with cancer patients and their families, as well as HNR House Parties which provides kids fighting cancer the opportunity to enjoy a concert right in their living room. As they inspire schools, communities, businesses and individuals to help raise awareness, the Nashville and country music community has opened their arms and hearts graciously to help spread the word.