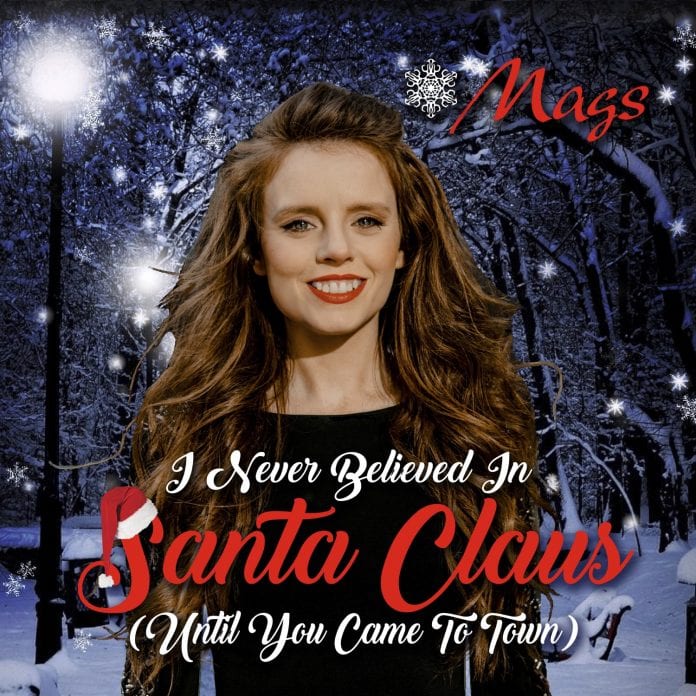 Irish-born, country music recording artist and global entertainer Mags (Mags McCarthy) celebrates the “the reason for the season,” and shares her hope and cheer with her original holiday tune titled, “I Never Believed In Santa Claus (Until You Came To Town).”* Co-written alongside Michael Anthony (and produced by Anthony/Emerald Field Productions), the track was distributed to country radio late last week (PlayMPE 11/8/18) and is now available via all digital retail outlets (Apple Music/Spotify/Amazon – https://digital-delivery-services.lnk.to/MYycOPR)

Recorded in Nashville, the musical composition is in keeping with the traditional sounds of country holiday classics. Featuring Mags’ performance on fiddle, the upbeat, two-step shuffle renews hope and recalls that love is the most precious and giving present of all.

THE HOLIDAYS, THEY COME AND GO
NOW I LOVE THAT TIME OF YEAR
STILL HOPING I MIGHT CATCH A GLIMPSE
OF THE ONE WHO IS SO DEAR
YOUR GIFT WAS NOT SOMETHING
THAT WILL BREAK – OR FADE AWAY
IT’S THE KIND OF LOVE WE ALL SHOULD HAVE
EACH AND EVERY DAY

“I believe, the spirit of Christmas and the hope that the Season, and Santa,
bring should be a sentiment that we share with one another all year long,” Mags said. “This tune is a gentle reminder of the joyful heart that Santa represents, and the meaningful gestures of unwavering kindness and generosity that we should share as our daily gift to one another.”

The release of the holiday tune continues Mags’ momentum at country radio. Mags released her debut single, “Strong Enough,” which met with overwhelming welcome and applause from country music fans and ranked in the TOP 50 on the MusicRow Breakout Chart (November 2018). Mags began her musical arts pursuit as a four-year-old studying Irish dancing. Catering to an undeniable musical hunger, Mags expanded her curriculum to explore and learn a variety of dance styles as well as musical instruments with primary concentration in violin. Courted by the world-renowned Irish dance troupe, Rhythm Of The Dance, the UCC (University of College Cork) student became a global performer nearly overnight. The 29-year-old singer-songwriter and composer has since canvassed 40-plus countries, performing before millions as the principal lead of the dance troupe and a solo-touring artist.

Next week, Tuesday, November 13, 2018, Mags is scheduled to perform before a number of prominent country radio stations at the fall Music Row Live radio remote to be held at The Tracking Room in Nashville. In early December, her tour schedule will take her to Pittsburgh where she will make a special appearance to perform in the Christmas Wonderland Concert at Byham Theater, Pittsburgh, PA. on Saturday, December 1, 2018. The event will benefit the Children’s Hospital of Pittsburgh, Children’s Miracle Network and Arnold Palmer Hospitals.