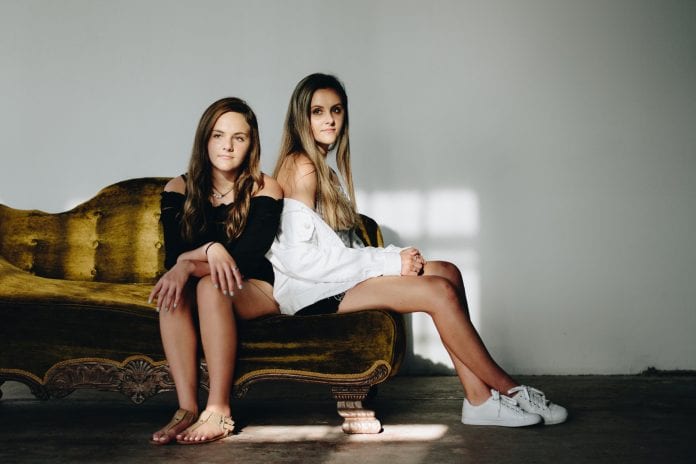 “We are pushing country to the edge and embracing elements of our favorite pop artists,” says Kayla and Kelli of Country-Pop duo, Wild Fire. The teen sisters are making a name for themselves in the Country scene, writing deeply catchy and inspiring tunes that are beyond their years.

“Flaunt” is one of these tunes and the second single off of their upcoming EP, Been There. The song was inspired by one of Kayla’s friends, “A friend went to homecoming with a boy and he just wanted to show her off. She was not going to be a part of that. I took note of the situation and filed it away for a future song.” Been There. is set to drop April 19th, and was co-written with hit songwriters such as Shane Stevens (Carrie Underwood, Lady Antebellum, Kellie Pickler) and Bonnie Baker (Hunter Hayes, Rascal Flatts, Rachel Platten), and is produced by LA-based multi-platinum producer Nash Overstreet (Britney Spears, Meghan Trainor, Rachel Platten).

“Flaunt” represents Wild Fire’s overarching message for their listeners. “We want them to feel inspired, empowered and motivated to be the best they can be. We want them to stand up for themselves and be comfortable in who they are.”

Despite their young age, the singer-songwriters have already been appraised for their talent; Winning “Female Vocalist of the Year” in the Young Adult category at the Josie Music Awards in 2018, and receiving several nominations from Nashville Universe Awards and the Texas Country Music Association. Being only 3 months into 2019, they have already landed a performance on Great Day Houston, a performance at Dollywood and have been selected as ambassadors to the Global Country Music Association (GCMA). In this role, they will be advocates for equality and fairness for women artists in the genre.

Wild Fire began their music career by joining musical theatre at the tender age of 5 and 6, but it wasn’t until after placing as Semi-Finalists in the Houston Livestock Show and Rodeo’s “Rodeo Rockstar” in 2016 that they decided to bring their talents together and form Wild Fire. Taking professional vocal lessons from top instructors, and co-writing with hit songwriters such as Bonnie Baker and Shane Stevens, the girls have refined their sound to the country-pop excellence it is today.

“Flaunt” is a representation of the future of music. Fun, catchy, motivating and surprising, the girls may be young, but the message is clear; Wild Fire will make a name for themselves and inspire everyone in their path.

For more information on Wild Fire: