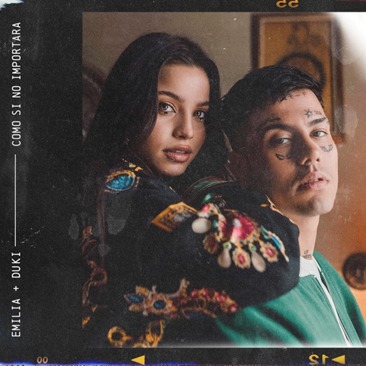 The young urban singer and songwriter Emilia continues to gain momentum and surprises us by joining the trap star DUKI on her new single “Como Si No Importara“ (As If It Didn’t Matter).

With an explosive music video, and lyrics that speak of passionate and secret love, “Como Si No Importara” finds these two leaders of Argentina’s new generation of urban artists combining their extraordinary talents on a song that is sure to become a favorite of their millions of fans. Written by Emilia, FMK and DUKI, and produced by Big One, “Como Si No Importara” is the followup to Emilia‘s successful single “Perreito Salvaje” featuring Boza, whose music video started trending within hours of its premiere and remains an airplay favorite.

The music video of “Como Si No Importara,” which portrays the highly anticipated collaboration between Emilia and DUKI, was filmed in a North Miami penthouse. Director Martín Seipel notes: “It is rumored that Frank Sinatra stayed at this penthouse at the peak of his career. It seemed like the ideal place to relate a rendezvous between the two artists as they are immersed in a luxurious vintage aesthetic.”

In the meantime, Emilia continues serving as a coach on La Voz (The Voice) Argentina, and recently participated at the Premios Heat conference panel titled Latinas Who Are Transforming The Industry, while also performing “Perreito Salvaje” at the event with Boza.

Emilia maintains her momentum during mid-2021 with her two most recent singles. Hailed as a rising star, she has enjoyed critical acclaim while garnering industry recognition as an influential role model. The New York Style Guide recently praised her as “one of the biggest female stars in Latin music.”