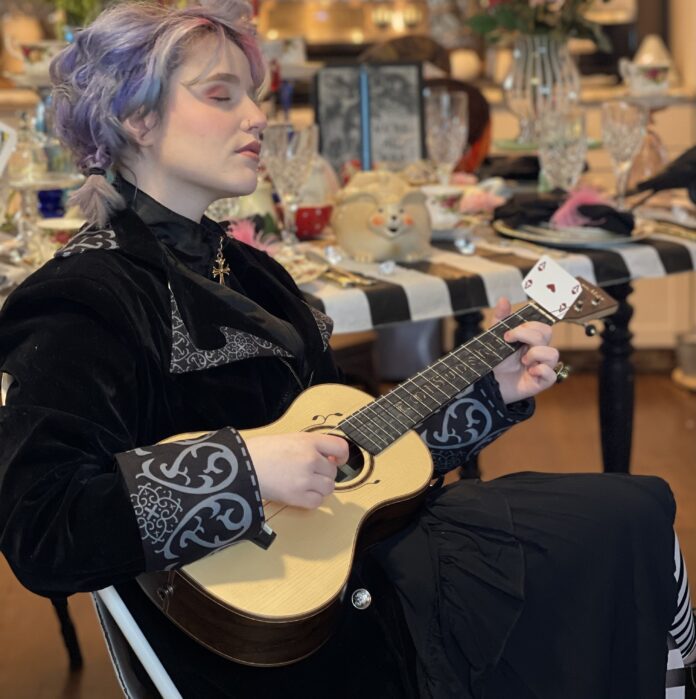 (NASHVILLE, Tenn.) – EmiSunshine’s song and new music video, “Teo and Tedora,” might never have come about, if she had not been rummaging through a boxful of forgotten artwork she created as a nine-year-old.

“I found these little paper cutouts in my storage a couple of years ago and thought they would make a good story for a song,” the now 18-year-old singer/songwriter said. “I didn’t know what the story would be until I got together with my mom and Fish Fisher and started talking about ideas.”

Fisher and Emi’s mother, Alisha Hamilton, are two of her frequent songwriting collaborators. Fisher also sometimes performs live with Emi, and has co-produced two of her albums, including “Diamonds,” which was released earlier this year. One of the tracks, “Teo and Tedora,” tells the story of two children who venture outside their boring, black-and-white world to discover color and beauty, but also “ugly truths.”

“So many shades of things / Gorgeous and complicate / Did you anticipate all the bad with the great?” Emi sings.

Originally intended to be a children’s song, “Teo and Tedora” evolved into something more complex, which Emi says can have meaning for people of all ages.

“For me, the song is about learning and discovery,” Emi said. “It’s about not being afraid of the unknown.”

Despite its ominous warning to “be careful what you ask for,” the new animated music video is likely to appeal to children with loveable characters emerging into a world full of lush color, guided by a wise robot.

“Failures and successes come and go,” Emi said. “I hope people who listen to this song will think whatever they want to do in their lives, they shouldn’t be scared to try. As you go from dark to light, you have to find your way.”

The music video was animated by Dustin Wayde Mills, who also produced EmiSunshine’s animated video for “Dandelion,” a darkly humorous song about cannibals, which was released last Halloween season. Though perhaps not as funny, “Teo and Tedora” has a more uplifting storyline.

“The characters are not modeled after real people; they are based on the ones I drew when I was younger,” Emi said. “I was inspired by Stephen King novels and Tim Burton films like ‘The Nightmare Before Christmas’ and ‘The Corpse Bride.’ The characters in the video, however, are not exactly like what I drew as a child. Dustin adapted them to his own style, but I love what he did.”

“Teo and Tedora” is on EmiSunshine’s album “Diamonds” and her children’s album “Universe.” EmiSunshine’s music is available on most music platforms and through TheEmiSunshine.com.