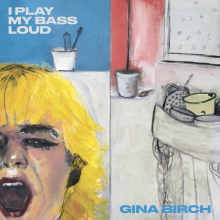 I Play My Bass Loud is heralded by today’s premiere of the propulsive first single, “Wish I Was You,” available now at all DSPs and streaming services. The track – co-written and co-produced by the legendary Youth and featuring guitar by longtime fan Thurston Moore – is joined by an official music video, directed by Gina’s filmmaker daughter Honey Birch and streaming now at YouTube. In addition, a limited edition “Wish I Was You” 7″ vinyl single is available now at the official Third Man Store.

“The album distills my years of musical, political, and artistic life with these genre-breaking songs,” says Gina Birch. “It’s a personal diary using sounds and lyrics, full of fun, rage, and storytelling.”

Known for a wildly diverse artistic career that includes co-founding iconic British post-punk band, The Raincoats, Birch will mark today’s arrival of “Wish I Was You” with a special single release show at Third Man Records London’s intimate Blue Basement, set for this Friday, November 11. Next year will see Birch celebrate I Play My Bass Loud with an eagerly anticipated UK/Ireland headline tour, getting underway March 21 at Brighton’s Hope and Ruin. Additional dates will be announced soon.

Gina Birch is a punk icon with a pop sensibility, an art-schooled adventurer who has painted, filmed, and created music by her own rules for over 45 years. Now, the co-founder of The Raincoats takes center stage with her first-ever solo album, I Play My Bass Loud, its declarative title evoking her singular instrumental approach as well as a potent rebuke to how female musicians can be diminutively typecast and ignored.

“There’s the whole thing about women playing their music and wanting to be heard, wanting acknowledgment or the space to do it,” Birch says. “The bass is sometimes assigned as a lesser instrument, and yet because of reggae and the creativity of a lot of women players, it has always been a creative and phenomenal instrument.”

Birch, who witnessed the first Sex Pistols show, founded The Raincoats in 1977 with fellow art student Ana da Silva. With Birch offering a melodic counterpoint to da Silva’s darker undertow, The Raincoats fused diverse influences spanning reggae and The Ronettes to Subway Sect and Lou Reed, typifying the timeless idea of punk as raw expression, not simply one sound.

Along with The Raincoats, Birch spent time as a member of Mayo Thompson’s legendary avant rock collective, The Red Krayola, and later formed the pop project Dorothy with Raincoats violinist Vicki Aspinall. The 90s saw a resurgence of interest in The Raincoats, cited as an influence by Bikini Kill, Sonic Youth, Beat Happening, and Nirvana, with the late Kurt Cobain professing his love of the band in the liner notes to 1992’s Incesticide. In late 1993, Rough Trade and DGC Records reissued The Raincoats’ three milestone studio albums, with liner notes by Cobain and Sonic Youth’s Kim Gordon. To celebrate, Birch and Da Silva reconvened the band for a series of live performances, including Nirvana’s planned UK tour in April 1994, though tragically, Cobain died a week before the tour began. In 1996, The Raincoats released their first new album in more than 12 years, Looking in the Shadows, on Rough Trade/Geffen, earning critical acclaim for their still bracing musical approach. Birch’s musical career continued through the 1990s and beyond, forming The Hangovers in 1996 and later playing multiple editions of Ladyfest, the landmark global music and arts festival for feminist and women artists. In 2009, Birch founded the environmentally crusading girl-band The Gluts with Hayley Newman and Kaffe Matthews, collectively writing music, making pop videos and the documentary film, The Gluts Go To Copenhagen, the latter chronicling the group’s provocative, inventive performance at December 2009’s Copenhagen Climate summit.

Last year saw Birch make her outstanding solo debut with “Feminist Song,” a righteous, dub-fueled anthem released as a Third Man single in celebration of Third Man London’s September 2021 opening. A longtime staple of The Raincoats setlist, “Feminist Song” – a retooled version of which appears on the new album – proved the seed for I Play My Bass Loud, which Birch recorded with GRAMMY® Award-winner Youth (Killing Joke, U2, Toots and the Maytals) at his garden shed studio in Wandsworth, England. While many of the album’s songs were fully formed by Birch before the sessions, the two artists teamed up to co-write a number of additional tracks, including the dynamic first single, “Wish I Was You.”

“It was a fabulous experience to record at Youth’s in Wandsworth,” says Birch. “Youth likes my passion and my bad guitar playing. I like his attitude, so calm and focused… in a Zen kind of way. We are in fact opposite sides of the same coin.”

Further highlights of I Play My Bass Loud include “Pussy Riot,” an ode to the Russian revolutionary art troupe penned around the time of their 2012 arrest, featured in The Raincoats’ set list, and now remixed and restructured by Da Silva with brilliant kitchen sink clatter. In addition, longtime Raincoats fan Thurston Moore contributed guitar to “Let’s Go Crazy” and “Wish I Was You,” while the explosive title track features no less than five female bassists, including The Modettes’ Jane Crockford and Emily Elhaj, bassist for Angel Olsen (with whom The Raincoats collaborated in 2016).

“I always thought, if I open my big bay window upstairs and play my bass, I’m not some groovy young rapper,” says Birch. “I’m this old white woman playing my bass guitar out of my window. I just want to stick my head out and yell down the street: HELL, I’M HERE, AND I’M PLAYING MY BASS LOUD!”

Along with her eclectic musical output, Birch has proven a gifted filmmaker, directing videos for The Raincoats, as well as such like-minded artists as The Libertines, New Order, Beth Orton, and more. In recent years, Birch has committed herself to painting, creating a growing body of work that saw her illustrate a recent book of Sharon Van Etten’s lyrics. Birch continues to push her creative spirit in new directions, staging her first solo painting show earlier this year at Gallery 46 in Whitechapel, London. Now, with I Play My Bass Loud – the striking artwork for which features a powerful Birch painting entitled “Loneliness” – Gina Birch offers the most potent display thus far of her singular voice and one-of-a-kind artistic vision.

“It’s like a dream come true,” Birch says. “I’ve been working hard in my artists garret, mostly painting, but always writing songs. An idea forms in my head and I write it or paint it, and now it seems, these ideas are blooming wildly, reaching over the wall! I have a solo album coming out and a solo painting show. Almost simultaneously. It is so great.”

2. And Then It Happened

7. I Will Never Wear Stillettos