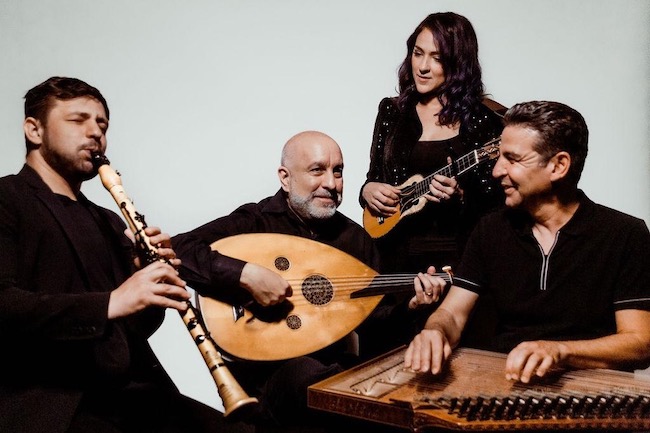 The new project blossomed out of a happenstance meeting at the GroundUP Music Festival in Miami. Percussionist Jamey Haddad, who brought the band together, shares his story of their first meeting:

“Within moments of having heard their music, Becca shared her feelings about the Trio and our conversation with Michael League, who immediately recognized the potential. With Michael’s interest piqued (and with his mind racing with production possibilities), Becca began concocting ways to incorporate The Trio’s musical language into her world; in a way that would create something entirely new. With all these moving parts beginning to creep towards one another and with The Secret Trio professing their own admiration of Becca’s art, it was clear all parties were on a path to make something unlike anything I, or the world, has heard before. Even as these unique artists approached their crafts from such far corners, the music they make together feels effortless and sublime.

I have heard it said that when musicians eschew their traditions and collaborate, the result is an adulterated version of something that struggles to find real meaning. But in an ever-changing world, one where languages and customs are  lost daily and traditional cultures are tossed aside, musicians like these have no choice but to cross-over as they evolve past the life that once was. The original geographical and social environment that bred and shaped our musical existence is now in the rearview mirror and the desire to follow our hearts and musical instincts lead us into uncharted waters where it becomes easy to lose the way. These musical journeys are played out all over the world and occasionally, such as in this case, the alchemy is extraordinary. Becca Stevens and The Secret Trio have made music of the now; with its own magic for finding the right resonance to dissolve the unnecessary barriers between different music and cultures, a perfect example for a world in turmoil.”

Their standout track “Pathways” has become one of Ara Dinkjian’s favorite songs to date. Stevens shares, “This is a setting of a Rilke poem written years ago as a gift for two friends on their wedding day. It was performed as a prayer during the ceremony and never recorded or performed again after that. During the writing phase for this record, I found it on my computer hard drive and included it in the song scraps folder on a whim. Michael and the members of The Secret Trio thought it would be a really nice fit for the ensemble.”

GRAMMY-nominated, Brooklyn-based and North Carolina-bred Becca Stevens draws inspiration for her compositions from pop, jazz, indie-rock and traditional Appalachian folk music. Her most recent album, 2020’s WONDERBLOOM (GroundUP) which she produced and engineered with Nic Hard, displays her skill of layering profound and discerning lyrics with funky and dance-ready beats in a record that Jazz Magazine described as “sophisticated and sensual pop” and The Mail on Sunday said is “Glamorous… semi-electric pop Prince might approve of.” The track “Slow Burn” from WONDERBLOOM was nominated for a GRAMMY for Best Arrangement, Instruments and Vocals in 2020. Along with her solo output, Becca is a highly-respected collaborator who has worked with the likes of David Crosby, Jacob Collier, Michael League (Snarky Puppy), Brad Mehldau, Esperanza Spalding, Attacca Quartet, Laura Mvula, José James, Cory Wong, Vince Mendoza and Timo Andres

THE SECRET TRIO is made up of Ara Dinkjian (oud, a fretless lute), Ismail Lumanovski (clarinet) and Tamer Pınarbaşı (kanun, a 76-string zither), who came together to create a new type of chamber music, combining the elements of sound, texture and rhythm with new and interesting approaches to their instruments. They perform original pieces and traditional melodies that fuse the microtonal modes and improvisation of the Middle East, dance beats of the Balkans, and elements of jazz, rock, classical and world music. The delicate harmonies, rapid-fire synchrony and intricate counterpoint developed by a trio of musicians with separate roots in Armenian, Turkish, and Macedonian Roma music are extraordinary. By inventing new ways to play percussively on fundamentally melodic instruments, the ensemble, full of rhythm and drive, harmony and counterpoint, never sounds like only three instruments. Soundscapes, their first CD, was released in 2012. Their second CD, titled Three Of Us, was released in 2015 and includes special guests Sezen Aksu and Erkan Oğur. The Secret Trio has performed in eight countries, in prestigious venues and festivals such as Lincoln Center (NYC), Symphony Space (NYC), GroundUp Festival (Miami), Metropolitan Museum of Art (NYC), Smithsonian Folklife Festival (Washington D.C.), Cemal Reşit Rey Theatre (Istanbul), Odeon Theatre (Amman, Jordan), Stavros Niarchos Foundation (Athens, Greece), and they appeared with a full symphony orchestra at the Sparda Classic Night in Wurzburg, Germany.