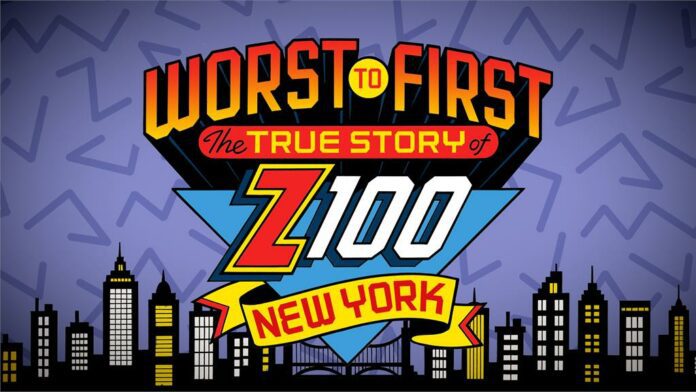 WORST TO FIRST: THE TRUE STORY OF Z100 NEW YORK WILL BE RELEASED ON VOD AND CABLE IN THE UNITED STATES AND CANADA ON FRIDAY, FEBRUARY 11.

WORST TO FIRST is a feature-length documentary that portrays the against-all-odds inspirational story of the launch of the iconic and most successful radio station in history, New York City’s Z100. In 1983, Z100 launched from the swamps of New Jersey, where no artist would venture, and the DJs had to buy their own records just to have music to play on air. Fun, poignant and aspirational, the film features Scott Shannon and several other Hall of Fame radio personalities as well as industry legends like Clive Davis and Elvis Duran.

Iconic artists who got their start on Z100 such as Jon Bon Jovi, Joan Jett, Nile Rodgers, and era superstars, Debbie Gibson and Taylor Dayne all share their personal stories of the importance of the station, their love of radio and passion for performing music.

Capturing the times, personalities and music of the era, WORST TO FIRST portrays the ultimate David and Goliath story that built the foundation for the world’s biggest radio station and the people behind the legacy that endures and continues to grow, reaching eight-digit audiences daily, and continuing to influence the face of media and entertainment.

MITCHELL STUART is a multiple film festival and Emmy-Award winning filmmaker and storyteller of compelling documentaries, groundbreaking digital series and industry-disrupting brand campaigns. Whether following his heart to tell an inspirational, against all odds story about female freedom fighters in Africa, or honoring his lifelong passion for music and filmmaking, Mitchell tells authentic stories that move and engage an audience.

Known for riveting, thought-provoking visuals and for often composing original music for the soundtracks of his films, he has been honored with 15 NY Emmy-Award Nominations for his music and entertainment documentary series, the Emmy-Award Winning Road to MSG, featuring Jay Z, Earth Wind & Fire, Chicago, Z100’s Jingle Ball concerts with Lady Gaga, Katy Perry, John Mayer, Justin Bieber, Taylor Swift and more. Dozens of film festivals throughout the world have honored him and his partner, Cheryl Halpern, winning awards for directing, best film, social justice, world peace and humanitarian efforts with their documentaries, Natsanat (Ethiopian for freedom), Fighting to be Free and Remembering Maurits Kiek.

Working closely with the Broadway community, Mitchell spearheaded the documentary-style Tony Award Campaign for Moulin Rouge the Musical resulting in 14 Tony Award nominations. He also directed a uniquely cinematic short film on the return to Broadway of Phantom of the Opera, and Broadway’s partnership with the MTA, The Only Sure Way to Broadway.

A proud born and bred New Yorker, his natural drive for diving deeper into his research preparation has led to stellar work with a diverse and brilliant who’s who list of musicians and newsmakers including The Who, Rod Stewart, Trevor Noah, Taylor Swift, Katy Perry, Jon Bon Jovi, Sting and The Foo Fighters in first concert celebrating the return of live music to Madison Square Garden post COVID-19.