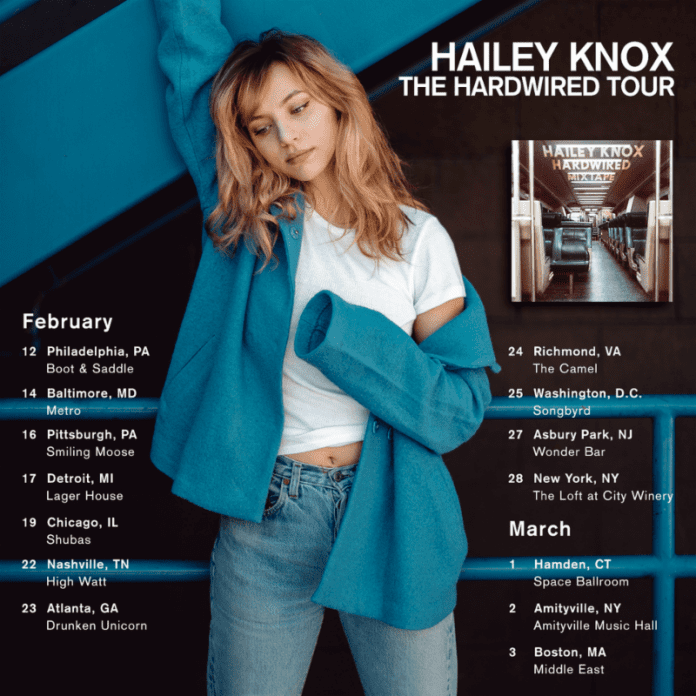 Hailey Knox will take her ingenious live performance and acclaimed (Teen Vogue, Billboard, Paste) body of original music on the road this February for a headlining US tour which will stop in 14 cities including New York City, Philadelphia, Washington, D.C., Boston, Chicago, and Nashville.

It will mark the first headlining run of shows for an artist that People a “music sensation,” Paper Mag declared a “certified social media crossover,” and who at the age of 17 appeared on both the TODAY show and in the NY Times. Hailey also has been selected to perform at the 2019 Sundance Film Festival on Jan. 29 as part of BMI’s music showcase, Snowball. Following appearances at the Austin City Limits Festival and tours with Charlie Puth andAJR, Hailey is sure to stun audiences with her “preternaturally soulful voice” (Billboard) and captivating guitar + loop pedal performance.

Atwood Magazine said that the ‘Hardwired Mixtape’ will “will leave its mark in your mind and in your heart” while Earmilkcomplimented Hailey’s “ability to create a symphony of sounds with just her voice, a guitar and a looping pedal.” Both the mixtape and her live performances are injected with humor, pop culture references, a cunning intelligence, and earnest reflections on everything from the dilemma of trying to feel “cool” in 2019, uncertainty in young love, and the complicated feelings of being out on the road written through the eyes of an artist touring for the first time.

Plus there is nothing quite like one of Hailey’s mash-ups that feel somehow both unexpected yet incredibly seamless. Here she is sewing together OutKast’s “Hey Ya”, Papa Roach’s “Last Resort” and Green Day’s “Brain Stew” with her original song “Take It Or Leave It”:https://www.youtube.com/watch?v=Es_nYLmMPT8