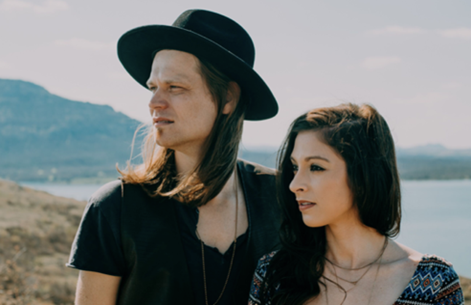 New York, NY (June 10, 2019) – Oklahoma husband/wife duo, The Imaginaries, Shane Henry (guitar, vocals) and Maggie McClure (keys, piano, vocals), recently finished recording their debut album, their first together as The Imaginaries, in famed Muscle Shoals, AL.  It serves as both an introduction to their music together and the beginning of their journey as a band after both singer songwriters have had their own successes as solo artists.  Maggie, with her subtly sweet vocals and piano style blends seamlessly with Shane’s blues-rock grit to form their own unique blend of Americana music.

Their experience in Muscle Shoals left a profound effect on the duo and what came out of those recording sessions were songs filled with effortless harmonies combined with heartfelt lyrics and real-life lessons like “Thinking ‘Bout You,” a sincere acoustic-driven song about missing someone you care about but don’t get to be with because of distance and “Revival,” a spiritual swampy roots song about finding hope and salvation.  It’s “about overcoming challenges,” says Maggie.  “The songs are inspired by personal experiences, our relationship, our struggles, and our journey.”

Growing up in Oklahoma, Maggie from the large city of Norman and Shane from the tiny 700-person town Verden, both caught the music bug early and built their solo careers racking up quite a few milestones along the way.  Maggie has opened for Sara Bareilles and Walk Off The Earth and has had over 45 original song placements.  She also had a small recurring role on ABC’s The Middle and was cast in the Disney show Violetta as the lead character’s English singing voice.   Shane moved to Minneapolis at age 19 to work and record with songwriter/producer Kevin Bowe (Etta James, Joe Cocker) and from there his career took off.  He’s since played a 30-date B.B. King tour and also toured with Etta James, Buddy Guy, Joe Bonamassa, George Thorogood and the Destroyers, Johnny Winter, Edwin McCain, the Neville Brothers, and Grand Funk Railroad to name a few.  He has had song placements on NBC, CBS, Discovery Channel, Hallmark Channel, and the E! Television network, as well as in feature films.

Watching the husband and wife duo perform you instantly see the chemistry, the love in their eyes, and the deep commitment they share with each other and to their music.  Their love of performing, writing music, and their faith all make up the glue that keeps them grounded and focused on the dream of turning what they’ve imagined for themselves into the reality of The Imaginaries.  More information about the album will be announced soon.  In the meantime, they just performed at Toby Keith’s OK Kids Korral Fundraiser After Party, and will be playing select dates throughout the summer including two big headline shows in their home state – Sat, Aug 17 at Grand Casino Hotel & Resort in Shawnee, OK  for their – “Play It Loud” series – watch a special documentary shot by film maker Adam Hampton for the casino HERE and Sun, Aug 18 at Myriad Botanical Gardens in Oklahoma City, OK  for the Twilight Concert Series (more dates to be announced soon).  They also performed four songs for One On One Cellar Sessions at City Winery – watch it HERE.