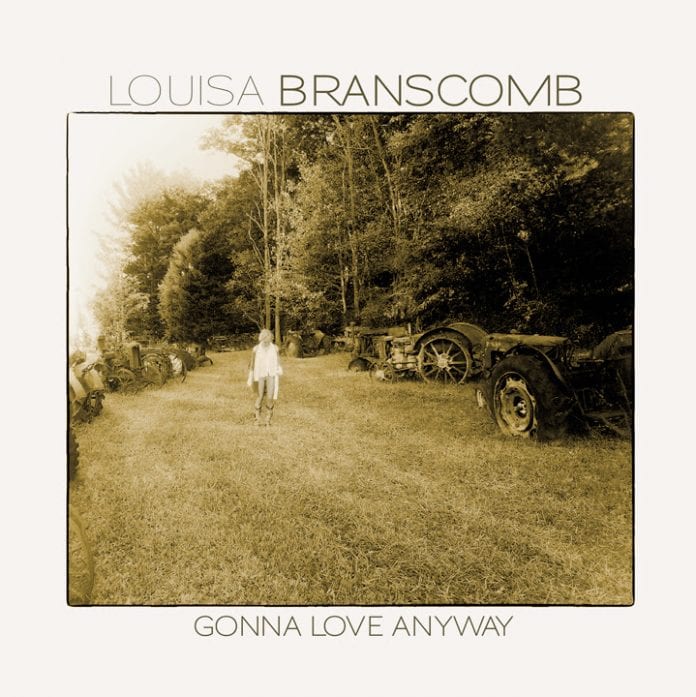 Bluegrass legend Louisa Branscomb has always viewed songwriting as a continuous journey. “The perfect song is a vanishing point,” she says. “I’m only interested in pursuing something I can never really achieve. It inspires me to keep trying to be a better writer and reminds me to live close to the bone, open to the unknown so I won’t miss the next song.”

Some may feel she nears this vanishing point in Gonna Love Anyway, her twelfth album, set for release July 12th on Compass Records. Throughout this stellar collection of songs, Branscomb’s legendary songwriting is on full display: conjuring up longing, humanity, and resilience and conveyed through the poetry of simple images of old barns, mountains, fields, and distant freight trains.

Revered as a celebrated bluegrass/Americana songwriter and performer, Branscomb co-founded the bluegrass quartet Boot Hill and blazed trails as the first female ever to help front a bluegrass band while also playing banjo and writing much of the band’s material. In 1971, she penned “Steel Rails,” the song that would go on to rocket Alison Krauss to international stardom and usher a new generation into bluegrass.

After a childhood spent riding trains, the theme of trains and the lure of the unknown has always featured heavily in Branscomb’s imagination and work – and Gonna Love Anyway is no exception. The album kicks off with Dale Ann Bradley on the rambling “Gone” (co-written with Diane King) – a song that uses physical travel as a metaphor for the transformational journey of the heart and soul. Resilience is the guiding theme of the album, and the title song reflects the courage of taking life as it comes, just as a train surrenders to the track. Branscomb delves into stories that range from the pathos of love (“Can I find the strength / To kiss this love goodbye” from “Ain’t No Good Goodbye;” co-written with Teresa Neal) to the wonder and innocence of an Alabama childhood (“Barefoot Girl;” co-written with Becky Buller).

On select songs on the album, Branscomb puts her adept musicianship on guitar and harmony on full display. In addition to this, her frailing banjo adds to the raw ache of “There’s No Marker on Our Grave.” As an unexpected treat, she steps into the light to sing the inspired “Blackbird in the Rain” (co-written with Neal).

A brilliant cast of singers and musicians helps lift each song on the album to its potential. Co-producer Missy Raines explains, “We took a designer approach to considering whose style and voice we felt best matched each song.” Thus listeners find singer Dave Petersonpowering out a Monroe-style bluegrass traditional (“Blue Moon Blues”), veteran Claire Lynch on the plaintive, elegant “Freight Train for a Song,” and new sensation Molly Tuttle on the poignant gem of the album, “Gonna Love Anyway” (co-written with Jennifer Strickland). A long list of renowned artists appears on the album, including Alison Brown, Stuart Duncan, Rob Ickes, Josh Williams, Kristin Scott Benson, and many more.

The showpiece of the project, however, is the commemorative version of Branscomb’s classic “Steel Rails,” a masterpiece that brings together singers and instrumentalists Tina Adair, Dale Ann Bradley, Alison Brown, Becky Buller, Stuart Duncan, Jenni Lyn Gardner, Steve Gulley, Sierra Hull, Kimber Ludiker, Bryan McDowell, Missy Raines, Molly Tuttle, Jeanette Williams, and Celia Woodsmith with Branscomb in a stirring new perspective on a song that has inspired legions of artists in the years since it was first written. Indeed, Buller credits “Steel Rails” with teaching her how to write music, while Bradley has deemed the iconic song as one of the most cherished folk songs of the 21st century

Like a passenger on her beloved trains, Branscomb still approaches each of her songs as a challenge and an adventure.

“When I write, I try to let myself be carried by the rhythm of what is most real; I’m searching for the truest of true,” she says. “That’s what I have to write.”