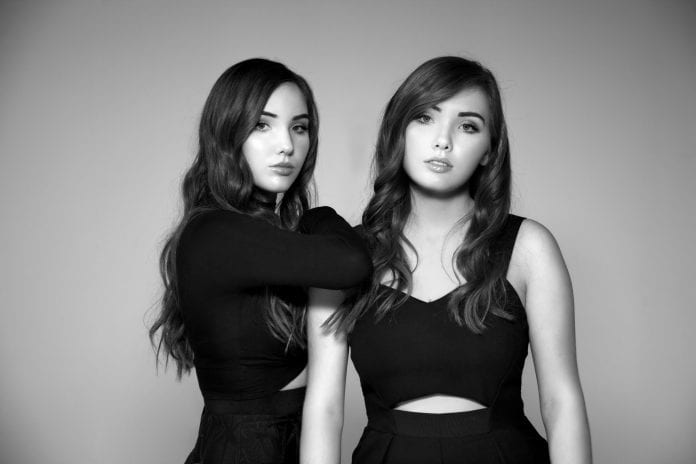 20-year-old identical twin sister duo Fionn’s debut self-titled album, the culmination of a Vancouver upbringing influenced equally by the Old folk of their father’s native Ireland and the clear-eyed wonder of hearing Fleetwood Mac’s ‘Rumours’ for the first time, is out October 26th on 604 Records. Busking as a duo since age twelve, Brianne and Alanna Finn-Morris played over one hundred shows a year while in high school, and in sync developed the evergreen, harmony-heavy folk sound that flows throughout ‘Fionn’s twelve tracks- six written by each sister.

The album’s witchy, intoxicating vocals and guitars set to lyrical themes ranging from religious and sexual liberation to the destructive power of misogyny and hereditary anxiety, come inspired by a series of “a-ha” moments in the sisters’ lives. The first came at age twelve when they booked their first “gig” while singing on a Vancouver street- an onlooker’s Christmas party. Perhaps the most recent came when they signed to 604 Records (Carly Rae Jepsen’s launchpad). And in between came the “a-has” of first love, first loss, the recognition of the male gaze, and the recognition that they could use their music to help tear it apart.

Watch the lyric video for “The Horns Are Fake,” a literal take on the dangers of toxic masculinity, which PopMatters said, “doesn’t take long to evolve into a swirling crescendo, equal parts rock and folk-pop in its tremendous delivery.”

With metaphorical, often fantastical lyrics and a mastery of imagery, the album is reminiscent of many of Fionn’s biggest inspirations: Joni Mitchell, Hozier, James Blake, Amy Winehouse, Radiohead. With the bite of a young ‘Jagged Little Pill’-era Alanis Morisette, songs like scathing beauty-standard takedown “Magazine Face,” and Celtic creeper “A Pagan’s Prayer,” ‘Fionn’ puts the adage “wise beyond their years” to shame. And with a range of styles, from slinky minimalism (“Close Talking”) to airy acoustics (“Skeleton”), the album displays a fluid musicality equal to that of their multigenerational role models.

Fionn recently played their NYC debut at the Annie O Series at the Standard East Village Hotel, and make their LA debut later this month at Bardot in a School Night series performance on September 24th. The album is set for a CBC First Play next month, and its songs have already been praised by Billboard, Northern Transmissions, and more.