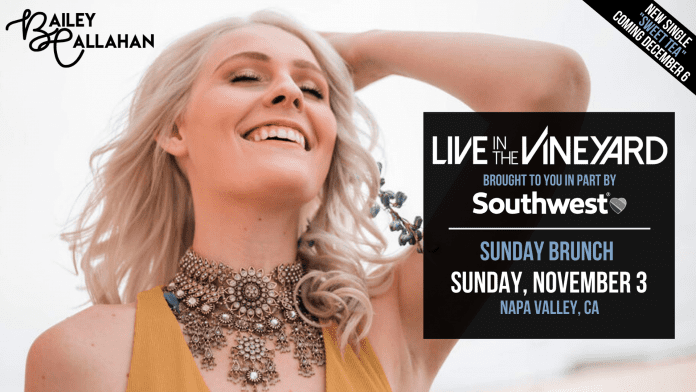 NASHVILLE, Tenn. (October 29, 2019) — Nashville-based, indie recording artist, Bailey Callahan has been named as a Southwest® “Artist on the Rise.” The nineteen year-old songstress and country recording artist was selected from three finalists who participated in the airline’s program that supports up-and-coming talent. As the winning contestant, Bailey will head to Napa Valley where she will perform at “Live In The Vineyard” (LITV) this weekend. Now in its ninth year, LITV is an exclusive and sought-after private music, food and wine event that pairs live entertainment, featuring some of today’s hottest entertainers, with Napa Valley’s most-revered winemakers and world-renowned chefs.

The recognition is a precursor to Bailey’s upcoming single release, “Sweet Tea,” slated to be released Friday, December 6, 2019 via all major digital retail and streaming outlets.