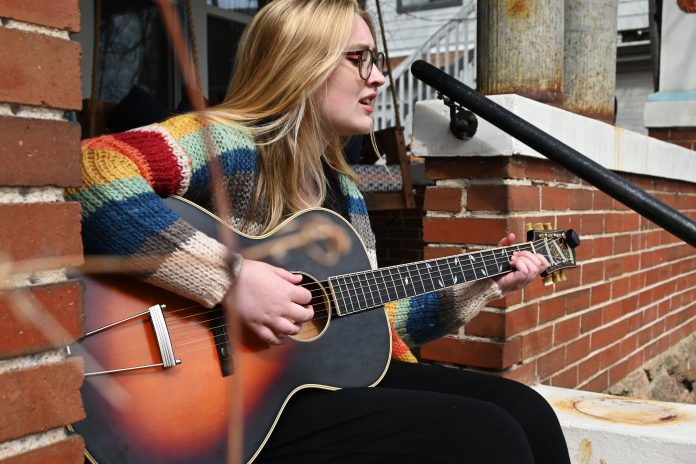 New York, NY (August 18, 2021) – Finn O’Sullivan has been announced as the winner of the coveted John Lennon Songwriting Contest “Song of the Year” for her original song “When the Power Comes Back On”

(www.jlsc.com). The Boulder, Colorado native was one of 12 Lennon Award winners who competed for the “Song of The Year.” The JLSC is celebrating its 25th year, and presents over $300,000 annually in cash awards, studio gear, instruments and prizes to contestants entering their original songs in 12 categories.

As the “Song of the Year” winner, 19 year-old Finn won $20,000 in cash in addition to prizes from Focusrite (Clarett 8Pre), OWC (Mercury Elite Pro Dual 20TB), Mackie (SRM-Flex Portable PA) and Konig & Meyer (Stand Package). She has received additional prizing from Genelec, Gibson, Audio-Technica, and Neutrik, after winning both the Lennon Awards and the Grand Prize packages in the Folk Category. Her song was selected to win the top prize by this year’s John Lennon Songwriting Contest’s judges include George Clinton, Bootsy Collins, Elle King, Prince Royce, Tim McGraw, Flea, Art Alexakis and many more.

Brian Rothschild, co-founder and executive director of the Contest said, “We’re excited about Finn’s song and the potential she shows as a songwriter and performer. Making it all the way through to being recognized for the ‘Song of the Year’ is a very impressive accomplishment considering the number of great entries and requires the support of judges and fans.”

In 2020 with the onset of the pandemic, the Contest launched weekly “Stuck at Home” contests with Genelec 8010 studio monitors as one of the prizes. They have resonated with songwriters around the world and will continue through 2021. Entry in the weekly contest also qualifies for entry in the annual John Lennon Songwriting Contest with over $300,000 in cash awards and prizes. Profits from the Contest help to keep the John Lennon Educational Tour Bus (www.lennonbus.org) on the road to supplement music education and to demonstrate the latest gear and instruments.