Larkin Poe, the GRAMMY® Award-nominated sister duo comprised of Atlanta-bred, Nashville-based multi-instrumentalists Rebecca and Megan Lovell, are thrilled to announce that they will be hitting the road with the Monster Energy Outbreak Tour which kicks off on September 15, 2021, in St. Louis.

In addition to the Monster Energy Outbreak Tour, Larkin Poe has announced several tour dates that will begin on June 4 in Memphis. Throughout the summer Larkin Poe will make stops at venues and iconic festivals like Bonnaroo, BeachLife, Treefort, Roots N Blues, and Shaky Knees. The duo will also be supporting both Melissa Etheridge and Kenny Wayne Shepherd on select dates.

Needless to say, whatever touring was not able to be done in 2020, is certainly being made up for now. 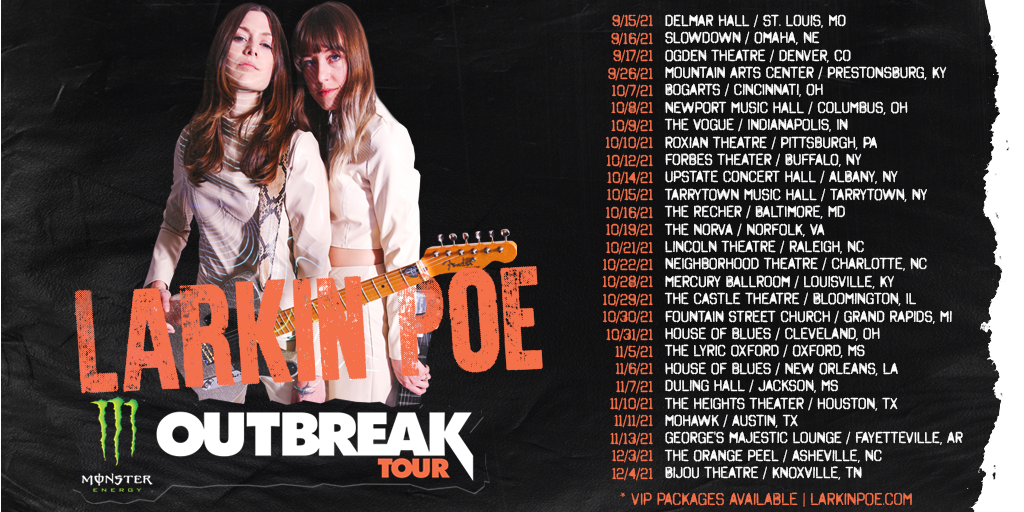 October 9 – Indianapolis, IN – The Vogue*

In 2020, Larkin Poe ascended to #1 on an array of Billboard charts with their widely-acclaimed fifth studio album, Self Made Man, available via the band’s own Tricki-Woo Records. The COVID-19 lockdown didn’t keep the Lovells from reaching their fans; the duo performed a number of “Home Sweet Home” livestream concerts and added to their much-loved YouTube covers series. Last summer, they released their second full-length of the year, Kindred Spirits, a self-produced collection of stripped-back covers both classic and new, including songs by the Allman Brothers Band, Robert Johnson, Elton John, Post Malone, Ozzy Osbourne, and more.

LISTEN TO SELF MADE MAN

This spring, the band launched LPTV, a subscription-based live streaming and video-on-demand platform offering exclusive concerts and original content. The duo also joined Dierks Bentley and The War and Treaty to perform “Pride (In the Name of Love)” at the 2021 ACM Awards. They will also be featured on a track on ZZ Top frontman Billy Gibbon’s forthcoming solo album, Hardware.

WATCH “PRIDE (IN THE NAME OF LOVE)”

As all of the music for Self Made Man was originally written with live performance in mind, Larkin Poe is truly excited to finally let the songs breathe.

“We can’t wait to get back on stage with the Monster Energy Outbreak Tour this fall for the first time since our album, Self Made Man, came out!” said Larkin Poe. “It’s going to feel so good to be back in a room with people celebrating live music again!”