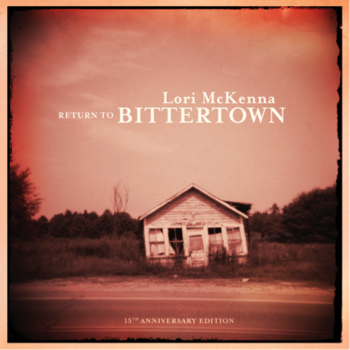 Lori McKenna will release new acoustic versions of Bittertown’s “Bible Song” and “Stealing Kisses” July 24 on CN Records in honor of the album’s 15 year anniversary. The re-recorded songs were produced by Luke Laird and recorded at Sound Stage Studios in Nashville, TN.

In addition to digital release, the songs will appear on limited edition 7” vinyl along with specialty merch which will be available for purchase at six intimate performances of the album this summer. Tickets go on sale this Thursday, May 23 at 10:00am local time.

Of Bittertown, McKenna comments, “Bittertown was my 4th record. It came out in 2004, three days before my 5th and youngest child was born and it changed my life. Faith Hill recorded 3 of the songs on that record and that was my introduction to Nashville and how I found my second home. Boston to Bittertown to Nashville you could say. It was a blessing and remains a huge part of my life even now.”

The new music follows a series of breakthrough years for McKenna, which included the release of her Grammy Award-nominated album, The Bird & The Rifle (2016), and Americana Award-nominated, The Tree (2018).  Both albums were produced by Grammy Award-winning Dave Cobb and continue to garner overwhelming critical praise from NPR Music, Associated Press, Entertainment Weekly, The New York Times, Rolling Stone and The Wall Street Journal among others.

Additionally, McKenna continues to enjoy tremendous success as a songwriter. In 2017, she became the first songwriter to win back-to-back Best Country Song awards at the Grammys since Shania Twain in 1999-2000 with her solo-penned, No. 1 hit “Humble & Kind” following 2016’s win for “Girl Crush” (co-written with Liz Rose and Hillary Lindsey). McKenna also won Song of the Year for “Humble & Kind” at The 50th Annual CMA Awards and became the first songwriter to win the award in consecutive years since Vince Gill (1991-1993) and the first female songwriter to win back-to-back nods in the history of the CMAs. Moreover, she made history at the 52nd Academy of Country Music Awards becoming the first woman to be awarded Songwriter of the Year.