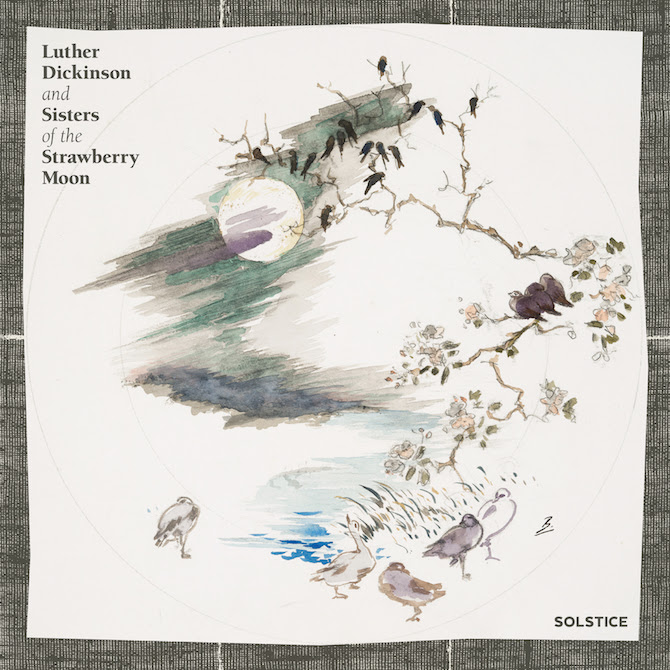 Luther Dickinson and Sisters of the Strawberry Moon are set to release their debut album Solstice tomorrow via New West Records. The all-star collaboration features Luther Dickinson alongside Amy Helm, Amy LaVere, Birds of Chicago, Sharde Thomas, and the Como Mamas. Produced by Dickinson over four days at his family’s Zebra Ranch Studio in Independence, MS, Solstice has been met with critical acclaim. No Depression states, “Every song on Solsticeresonates with a soulful beauty, with the harmonies and melodies wrapping over and around the lyrics of the songs in a colorful blanket that warms our hearts,” while adding, “Some albums overflow with the feelings of joy and spirit of musical harmony that the musicians must have expressed when making the album.  Solstice is one of those albums; the music itself is transcendent, but the emotions of the musicians wash over us, touching us palpably.” American Songwriter also offered, “If this charming album is any indication, he should make it a yearly tradition.”

Solstice finds Dickinson taking a step back from the microphone in order to focus his efforts behind the scenes and flex his muscles as both a producer and guitarist. The result is a 12-song set that stands apart in his extensive catalog, a collection that brings together some of the most captivating female voices in modern American roots music and filters each of their distinctive personalities through a singular vision of artistic community and musical exploration. It’s a wide-ranging collection that harkens back to the era of the traveling revue when a rotating cast of entertainers would take turns fronting a house band for a series of dynamic and unpredictable performances. “Each singer brought a handful of songs to the table,” Dickinson says of the album’s diverse source material. “Sometimes it was an old tune they wanted to reinterpret or something new they’d written that felt right for the cast of characters at hand, but no matter the track, all of our colors ended up mixing together on a communal palette.”

“The whole idea of this album was to introduce a bunch of friends and get them to collaborate with each other,” says Dickinson. “I wanted to let the chemistry flow, to create an environment where everyone’s flavors naturally blended together and each artist could just be themselves. I think you can feel that freedom in music. Most of the work was in getting the spark lit,” he says of assembling the all-star cast. “It was sort of like throwing a party. Once you manage to get everybody together, you can just step back and let it all happen.”

Today, Billboard has premiered Solstice in its entirety.  Speaking to the magazine, Dickinson said, “The whole thing just tapped into this funky Mississippi folk-rock acoustic aesthetic we’ve built at our place.  It’s not just the cast of characters but the orchestration — Amy Helm on mandolin, Allison (Russell of Birds of Chicago) plays clarinet, we’ve got nylon string banjo, Mississippi fife, and drum. Amy LaVere brought upright bass. I play on top of it. We just put it all together and it worked out great.” Hear it in full HERE.

With nearly all of the album’s vocals recorded live in just one or two takes, there was no room for overthinking or second-guessing, only instinct and intuition. Commitment to living in the moment was key to keeping the album as cohesive as it is, no small task considering the broad array of songs and voices it encompasses. “Recording the album in the same place at the same time with the same people really helped glue the whole thing together,” says Dickinson. “It wouldn’t have worked if we’d recorded all over the map at different times. We had to physically be present to share in those moments together.”

“We believe music is a celebration of life, and folk music an expression of community and family,” Dickinson concludes. “Solstice is an artifact of our new friendship and musical fellowship.”

Solstice by Luther Dickinson and Sisters of the Strawberry Moon will be available digitally, on compact disc, as well as vinyl LP and is available for pre-order now via New West Records.

Colorado Music Relief Fund Raises Over $625,000 with ‘Banding Together’ Concert