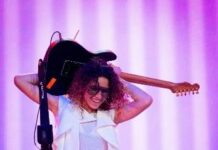 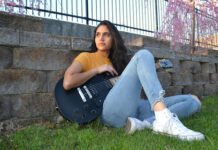 Musician-actress Malina Moye released her new video “Enough” from her Billboard number one album “Bad As I Wanna Be” this week. The video uses the backdrop of Los Angeles to showcase the beautiful differences of the people who are the heart and melting pot of America.

“Diversity is really the soul of the video,” states filmmaker Marc Fusco, who directed it. “Malina’s lyrics speak about our dreams and hopes of what we want for our lives, but then come to terms with the DNA of America and the healing that it needs to do.”

With an impassioned performance by the guitar virtuoso, Moye delivers the underlying theme of the song, pointing out that perhaps it’s not us who need to change, but those in America who need to be more accepting. The song’s sound is Rock-vintage soul with contemporary elements, culminating with an emotional guitar solo by Moye.

“One of my jobs as an artist is to start uncomfortable conversations,” Malina explains. “For instance, I experienced first hand what it’s like for me and folks who look like me, to not be represented in the music industry on certain platforms—those that are supposed to celebrate the musician and their instrument. Then I finally realized something. It had nothing to do with skill or sound, but rather that some of us would never fit into the stereotypical image of what the old industry guard thinks certain genres of music should look like.”

“So as a black female songwriter-guitarist, I started writing about it,” Moye adds. “I realized that this experience is a common denominator with anyone who’s been told time and again ‘you don’t fit in’ or ‘you’re not good enough.’ And I decided to take back my power and launch the #IAMENOUGH campaign to remind myself that I am young, I am black, I am a woman, and I am somebody. So I am encouraging everyone to celebrate who you are right now in this moment—not who you’re trying to be, but exactly who you are now. You are enough.”

With accolades from publications such as Billboard, Guitar World, and Vogue, and having graced some of music’s biggest stages—SXSW, Bospop, and the Rock & Roll Hall of Fame, Malina Moye brings a unique brand and charisma to music unlike any artist in the world today.