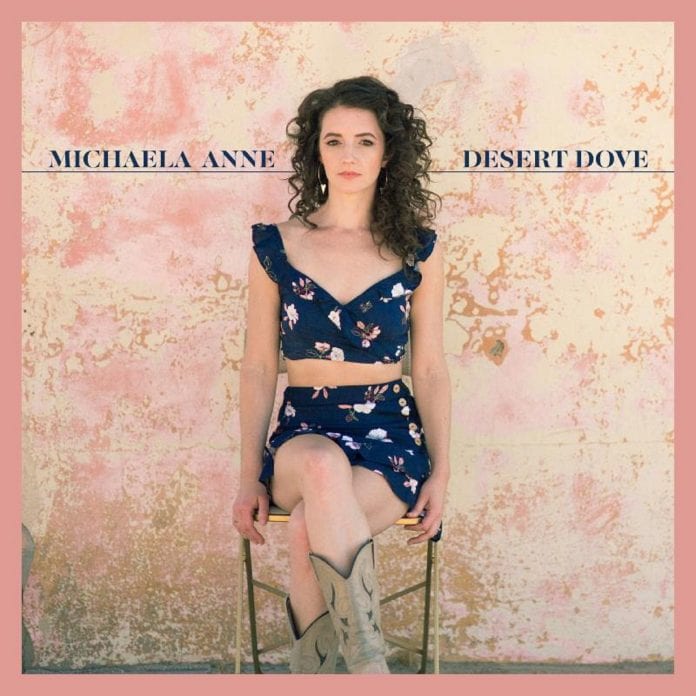 July 9, 2019 – Nashville, TN – Michaela Anne is proud to debut “Child of the Wind”, which exclusively premiered today via Brooklyn Vegan, who dubbed the track “a catchy, breezy dose of modern country.” You can listen here. The single is the newest from her upcoming album Desert Dove, out September 27th on Yep Roc Records. In June, Anne released the first single from the record, “By Our Design”, which premiered on Rolling Stone. In addition to playing notable festivals like Wisconsin’s Mile of Music and Nashville’s long-running AmericanaFest, Michaela Anne announced new East coast dates today for her fall tour. Pre-order Desert Dove here.

Recorded over the course of several weeks in San Clemente, California, Desert Dove was completed “on location” with the help of an all-star cast. Producers Sam Outlaw and Delta Spirit’s Kelly Winrich assembled guitarist Brian Whelan (Dwight Yoakam, Jim Lauderdale), fiddler Kristin Weber (Kacey Musgraves, Margo Price), and drummers Mark Stepro (Ben Kweller, Butch Walker) and Daniel Bailey (Everest, Father John Misty) to address this batch of songs with a fresh take, not leaning too hard on traditional arrangements or instrumentation. “Child of the Wind” is a great example of this; using a chunky, fuzzy electric guitar in place of what could have been a pedal steel or fiddle intro, adding sonic and tonal variables to the breadth of Michaela Anne’s range of characters and motifs.

Amidst the ups and downs of Desert Dove, there is a recurring focus on the emotions that fall in between peaks and valleys. “This record, for me, highlights the gray area, the nuance of emotional life and relationships that seems to be harder to convey in today’s modes of communication and limited attention spans: short excerpts on Instagram or Twitter paragraphs,” says Michaela Anne. “Nothing is black and white, solely good or bad. Who we are, how we live, how we love, what we desire or reject, it’s all full of contradictions and confusions. I wanted to explore that through my songs with care, depth, reality as well as light-heartedness, fun and fantasy.”

Michaela Anne also attacks most of the album with a sharp feminine perspective, dealing out wisdom, confidence, and sass with authority and maturity that is never tiresome. The easiest example of this is Michaela Anne’s light-hearted rebuttal to condescension and “mansplaining” with “If I Wanted Your Opinion,” but her stance drives deeper with each new song, all the way through the end of Desert Dove. “When I got to Nashville, I was told the ‘rules’ of songwriting,” Michaela recounts. “I was informed that a woman in a country song can never be the victim, but she can also never be the perpetrator. That’s not real life. As a woman, sometimes you’re everything all at once, and I wanted to write about those real experiences.”

Desert Dove is Michaela Anne’s full-length follow up to her critically-acclaimed 2016 release Bright Lights and the Fame, which garnered praise from NPR, The New York Times, Rolling Stone, Stereogum, and Noisey, who celebrated her as the antidote to commercial pop-country, calling her “our saving grace, our angel, the person who will help usher us into a new age.”

Desert Dove is also Michaela Anne’s first release as a new signee to Yep Roc Records. North Carolina-based Yep Roc announced their partnership with Michaela Anne on May 16th of this year, making her label mates with the likes of Mandolin Orange, Jim Lauderdale, Aoife O’Donovan, Chatham County Line, The Felice Brothers, Amy Helm, Tift Merritt, and Kim Richey. Billy Maupin, Yep Roc’s General Manager, says of the signing, “We are ecstatic that Michaela Anne is now part of the Yep Roc family. Her new album showcases her as a triple threat of singer, songwriter, and performer. We are excited to be part of the release.”