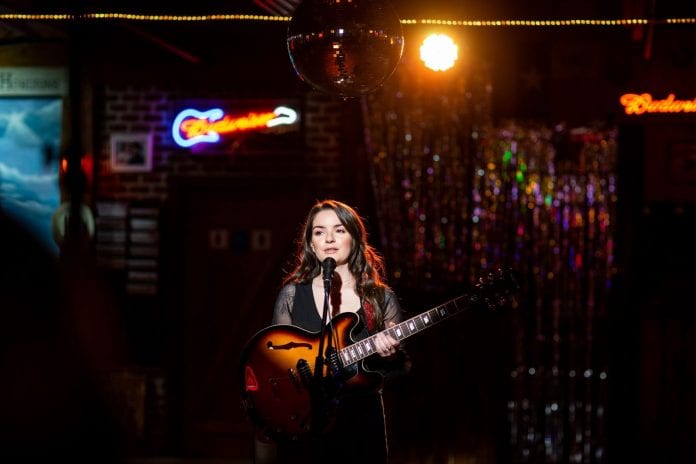 Directed by Mathieu Samson, Geneviève’s live video was filmed off the floors at Honkytonk Danse Country in Montreal, and the cinematic vibe provides the perfect ambience for the track. The tenderness in Racette’s vocals and the delicate yet balanced performance makes you feel like you’re in the room swaying along with a lighter in the air. That feeling so many can’t wait to get back to!

The song, produced by François-Pierre Lue, is about wanting to be someone’s sure bet, but only feeling like a ‘maybe’. It’s being so blinded by infatuation, that you can’t see that you’re being taken for granted. Geneviève wrote it while visiting Toronto, turning afternoon girl talk in a friend’s kitchen into a song. The other two songwriters being JUNO-nominated artist Barbra Lica, who has written cuts for such artists as jazz crooner Matt Dusk (Entertainment One/Universal), rising J-Pop singer Harumi (Sony Music Japan), and Taiwanese pop recording artist, Morrison Ma (Universal Music Group/X Entertainment), and Danielle Knibbe, who’s knack for penning insightful yet straightforward lyrics has already gained her recognition, earning her a spot at the Banff Centre for the Arts inaugural Singer-Songwriter Residency where she was given the nickname “The Lyric Doctor” due to her natural instinct for getting to the heart of a song.

Satellite, due out in 2022, is Geneviève’s third full-length release. A 9-song collection delivering honest stories of self-discovery and reflection through the cycle of love. The album, filled with intimate vocals, lush instruments and expressive harmonies, evokes moments of love, heartbreak, healing, forgiveness and ultimately falling in love again.

With over 2 million streams on Spotify, Geneviève Racette has captivated listeners with her gentle, yet compelling, emotional resonance, and garnered impressive industry support for her folk-pop tracks ever since her first EP in 2014. Through her vulnerable lyricism and ethereal vocals, Geneviève has emerged as a rising star in both French and English-speaking Canadian music scenes.

Her latest album, No Water, No Flowers, brought forth an immense amount of growth for Geneviève, turning the corner from Quebec recognition to national praise, including a Canadian Folk Music award, performing on stage with City and Colour at Osheaga, rave reviews from media, music publications and blogs, and tracking on multiple radio stations right across Canada. In the last two years Racette has performed as the headliner in over one hundred concert venues across the country, including Quebec, Manitoba, Saskatchewan and the Maritimes.

“Her honest storytelling and lush indie folk-pop melodies create a dense sonic palette while remaining raw and relatable to many.”

As a woman in music, it is essential to Geneviève that she surrounds herself with like-minded females in the industry. She is proud that over half her team involved in the creation of Satellite are female musicians and members of the industry. Through fine-tuning her artistic vision and developing a profound network of professionals, Geneviève is ready to work on this record with a newfound creative state of mind, hoping to reach out of the Quebec market exporting her music across North America and beyond.