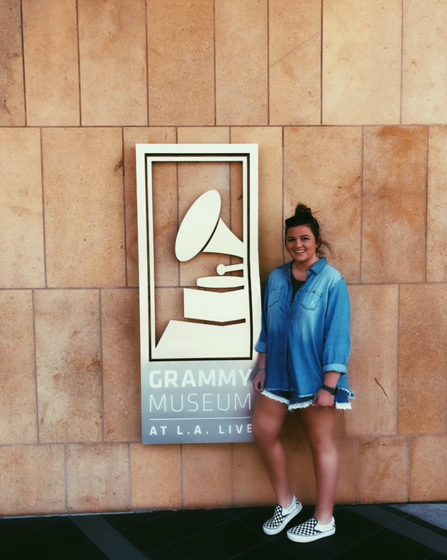 Nashville, Tenn. — July 24, 2018 — When asked about her typical day, Jaelee Roberts of Murfreesboro, Tennessee explains “I usually try to get most of my schoolwork done in the morning, so that I can save the rest of the day for practicing my fiddle, guitar, and singing”. Jaelee is seventeen years old, and there hasn’t been many days in those seventeen years that haven’t revolved around music. Her father, Danny Roberts, is an esteemed mandolin player and founding member of Bluegrass outfit The Grascals.

Her mother, Andrea Roberts, runs a booking and management agency as well as being an upright bass player. From the backstage of the Opry to music business meetings, to tagging along with her dad to the CMA Music Festival, Jaelee has seen the underbelly of professional music, and she’s still smitten. “I’ve grown up around music, and I cannot honestly see myself doing anything else,” she says. It’s fitting then, that Jaelee was invited, out of over 300 applicants from across the country, to deepen and showcase her vocal talent for the second time at GRAMMY Camp, which took place June 17th through June 21st in Los Angeles, CA.

As one of 87 students selected (and one of the seven attending vocalists), Jaelee spent five days immersing herself in the business of music, receiving vocal instruction, and learning to collaborate with songwriters and instrumentalists. “I have so many things to take away from GRAMMY Camp 2018– one being a greater understanding about the music business and I feel like I have a much better grip on planning my future and setting goals and working toward my future success in music,” says Jaelee.

At GRAMMY Camp, Jaelee had the opportunity to interact and be mentored by industry professionals that she hadn’t yet crossed paths with including Chris Sampson, founding director of the Popular Music program at USC Thornton School of Music, and Jeffrey Allen, also a professor at Thornton. She fondly remembers her time last year (2017) at GRAMMY Camp in Nashville learning from Laura Donohue (who taught Jaelee again this year), a vocal coach for numerous major label recording artists. “It was kind of like a movie,” she says, “it was just music in all the halls all the time– kids playing, singing and writing music everywhere!” This year was wonderful for the same reasons as last and she comments, “GRAMMY Camp is very special to me because of the new friends that I made. I’ve met people that I feel were meant to be in my life and that I’ll continue to be friends with and create music with.”

From the early age of 6 years old, Jaelee was competing in fiddle contests and brought home trophies from Alabama, Georgia, Illinois, Indiana, Kentucky, and Tennessee. At age 8, Jaelee won the Old-Time Singing competition at Uncle Dave Macon Days in Murfreesboro, TN competing against adults. But by age 11, Jaelee wanted more from music, the competition circuit stealing joy from her budding talent.

These days, Jaelee loves to perform and has been honored to sing and play on stage with bluegrass luminaries Larry Sparks, Rhonda Vincent, Marty Raybon, Carl Jackson, Larry Cordle, Russell Moore, and, of course, The Grascals as well as joining the Grand Ole Opry Square Dancers a few times for some clogging fun. One of Jaelee’s favorite musical memories so far was being invited to sing with The Whites – Buck, Sharon, and Cheryl – for a finale version of “Keep On The Sunny Side” at the Grand Ole Opry— her talent and bright future on full display for both the audience and the legends she was singing alongside. Jaelee has recently joined her first band, playing fiddle and singing harmony with Rebekah Long and she has been a participant in the IBMA (International Bluegrass Music Association) Kids on Bluegrass program in Raleigh, NC for several years and she serves as a member of the IBMA Youth Council.

What’s next for Jaelee? After being inspired by the teachings and creativity at GRAMMY Camp, she’s heading to the studio to plot a single release for late 2018. “Our camp motto was: A dream without a goal is just a wish and GRAMMY Camp has helped me to understand how to set goals so that I can make my dreams come true,” she says. In the future, she would love to attend MTSU, Belmont, or ETSU to study music after high school, and, like any Tennessee teenager, dreams of one day performing as a solo artist at the Grand Ole Opry. If her summer plans are any indication, she’s well on her way there!