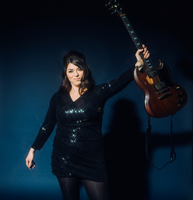 October 16, 2020—Consider the Speed, the new album from Canadian singer-songwriter Terra Lightfoot, is out now via Sonic Unyon—listen HERE. Additionally, Lightfoot shares the video for “Consider the Speed,” directed by Mat Dunlap, today—watch it HERE.

To celebrate the release of Consider the Speed, Lightfoot will play a special album release show on October 17 at 7 pm EDT that will be live-streamed through sidedooraccess.com. The show will feature Lightfoot and band (bassist Eli Abrams and drummer Glenn Milchem); tickets for the Livestream are now available via Terralightfoot.com.

Consider the Speed features previously released tracks “Love You So,” “It’s Over Now” and “Paper Thin Walls” as well as eight new songs.

Consider the Speed is the result of Lightfoot finding new roots on the road, more at home in her own skin than ever before. The artist’s relentless drive as a touring performer has earned her the distinction of becoming the first female recipient of the Canadian Independent Music Association’s Road Gold distinction, in recognition of having sold more than 25,000 tickets in Canadian markets in a single calendar year. And in addition to millions of miles logged while touring the globe, including marquee tour dates supporting legendary acts like Willie Nelson, Bruce Cockburn and Blue Rodeo, Lightfoot also found time to conceive, curate and produce “The Longest Road Show,” a groundbreaking touring revue.

The new album follows Lightfoot’s 2017 album New Mistakes, which was long-listed for the Polaris Music Prize and nominated for a JUNO Award for Best Adult Alternative Album, with its lead single “Paradise” also earning a production nomination as well as a SOCAN #1 Song Award.

1. Called Out Your Name