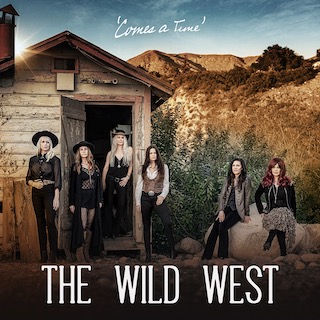 Calling themselves The Wild West, six of the most treasured female singer-songwriters in Los Angeles forged a strong bond of friendship that led them to write and record their first single “Better Way.” The empowering message of the ensemble’s first single is shared equally by its members, all of whom have enjoyed significant success as solo artists: (pictured above L-R) Manda Mosher, Deb Morrison, Amilia K Spicer, Tawny Ellis,  Pi Jacobs, and Heather Anne Lomax.

Touted by Relix as a “Female supergroup,” The Wild West is currently working on their upcoming EP and were listed in Holler Country’s The 10 Best Emerging Acts of Americanafest “They offered an impressive performance boasting no shortage of verve and variety – it would be hard to find a combo with a greater degree of talent or tenacity. Clearly, this bunch is ready to rumble.”  –Holler Country

They were also touted in No Depression’s Guide to Americanafest. with Amos Perrine is quoted as saying, “…the definite highlight promises to be The Wild West, six of the most highly respected female singer-songwriters in Los Angeles: Tawny Ellis, Pi Jacobs, Heather Anne Lomax, Amilia K Spicer, Deb Morrison, and Manda Mosher. Expect fireworks.”

All six members of The Wild West write, produce, and oversee the recording process for songs they bring to the band. They take turns singing lead while supporting each other instrumentally and topping each song off with The Wild West’s signature harmonies.

Their second single and video, “Comes A Time” released in November to honor Neil Young and his birthday. Their unique rendition features violinist Scarlet Rivera (Bob Dylan’s Rolling Thunder Revue) and was mixed by the legendary Bob Clearmountain.

For this new release, Tawny Ellis chose to bring in Neil Young’s “Comes A Time” due to her deep love and connection to the song. She envisioned the harmonies of The Wild West in combination with Scarlet Rivera’s violin parts weaving throughout. In addition, Tawny directed the new music video which celebrates the beauty of nature and the west coast. “This song has always spoken to me on a deep level. I love Neil’s writing and I brought it to the band because I thought it would be gorgeous to see what us ladies could do with it, and I was right. The video is an ode to our beautiful earth, the pacific coast line and my deep love for it and how it inspires all of us. It’s an honor to have Scarlet Rivera’s energy on this. She is such a lover of nature and this song. This video is a celebration of the beauty of our world and all of us in it.”

Manda Mosher adds, “Comes A Time” became a special comfort that was healing for us to play as a band in rehearsals. The harmonies and all the ladies’ instrumental parts weave together beautifully like a community banding together to weather all that lay ahead.”