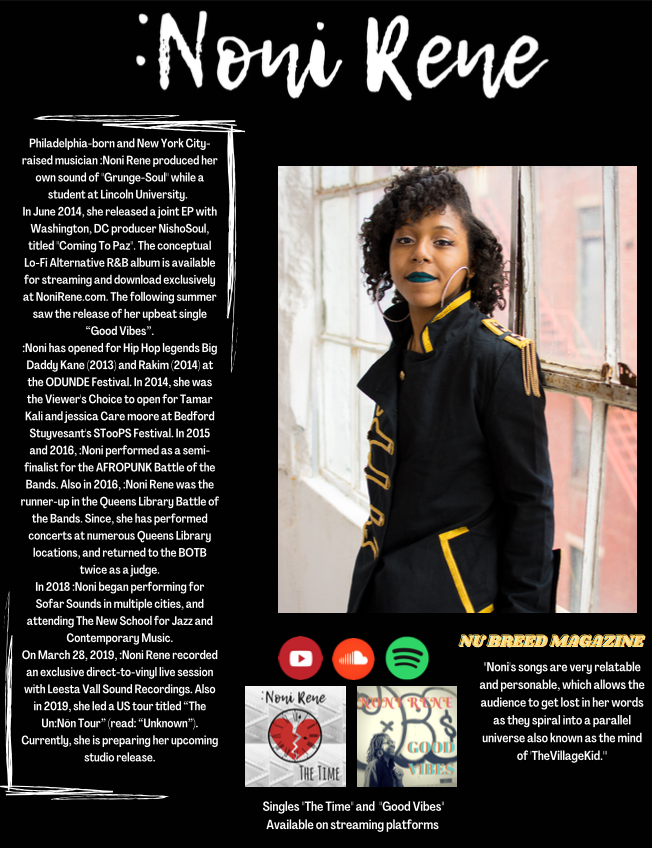 No one will disagree that it’s a tough time for musicians. But :Noni Rene is having none of it. The gritty, grunge-soul singer/songwriter with serious hip-hop cred from NYC is digging deep and finding ways to make things happen. “I can’t sit back and worry, thinking all of this will pass,” she says. “I have to put the pieces together. Now’s the time to get it done.”

Like so many promising musicians, :Noni had big plans for the spring and summer, plans that are now on hold. She has found this pause something of a paradox. “It’s been like a blessing and a curse,” she says. “I was looking forward to South by Southwest, but the pain of missing out on it has brought about new opportunities.”

Shortly after the pandemic shutdown :Noni, aka “TheVillageKid,” received a sponsorship from REC Philly and Amuse.io, which has given her a legit record label relationship and access to network resources that are sure to help her move forward, even during this uncertain musical time. While live performance, the lifeblood of the industry, especially for :Noni, has been put on ice, she has still found ways to move forward. “Even though I can’t access stages across the actual, physical United States, I’m still pretty excited to be where I’m at.”

The sponsorship has also enabled her to work with musicians remotely, to discuss her recorded work and works in progress. “It’s been going so well,” she says, “I’m thinking of opening up our sessions to the public.” One of the perks of working with REC Philly at this point is that :Noni now has time to put the music-career building blocks into place, including putting her legal responsibilities and business affairs in order. “I no longer have the excuse that I have too much going on,” she laughs. “Now is the time to get those things [I’d typically put off] done.”

:Noni’s partnership with Leesta Vall Sound Recordings, got her jump-started with a direct-to-vinyl live session released in 2019.

:Noni’s freshest new music, tracks “Good Vibes” and “The Time,” are a good indication of the energy and optimism she’s been after since 2014. Her songs are wise and deep, relatable, and invigorating.

She’s been test-driving those tracks and others on her Zoom-based live performances, which, though no substitute for her supersonic in-person gigs, have been a blast. “It’s pretty cool,” she says, “watching everybody in their little squares vibing along to the music. I love that you can reach people all over the world!”

“I really do love performing,” she says. “I love communicating and sharing my message with different audiences. I find they’re open to the experience, and to what I have to say. That’s been really amazing for me. It keeps me going.”